SUDBURY, Ontario — When Doug Ford, the premier of Ontario, canceled plans for a French language university and cut the post of provincial commissioner for French language affairs, he angered francophones living in Canada’s most populous province.

But he may have also unintentionally done them a favor by reminding the world that there are vibrant French-speaking Canadian communities, some dating back 400 years, outside of Quebec.

“I’ve been told so many times in my life: ‘Oh, there are francophones in Ontario?’ ” said Denise Truax, the co-director and editor of a French-language book publisher in Sudbury, Ontario, adding that the comment often comes from French-speaking Quebecers.

“I was being told this 50 years ago and it’s still happening. So even if this doesn’t mean that people will know us better,” she said, referring to Mr. Ford’s moves, “it might have scratched at that patina of ignorance.”

Mr. Ford, a populist Conservative, was among those Canadians who appeared to have a shaky grasp about the population of Ontario that speaks French as their mother tongue. While running for the leadership of his party last year, Mr. Ford, who is unilingual, said in an interview that it would be ideal to know French because “I love Quebec. I love Quebecers. They’re passionate.”

In November, after announcing the cuts, Mr. Ford then compared the francophone community in Ontario, whose language rights are protected by both Canada’s Constitution and language laws, to Chinese and Italian immigrants.

The result has been anger from across Canada. And those condemning the cuts include Prime Minister Justin Trudeau.

François Legault, the current premier of Quebec province, soundly criticized the cuts in Ontario as well, even though, historically, Quebec politicians have been reluctant to speak out in support of Ontario’s French minority. That is in part because of concerns that could encourage similar messages of support for the English-speaking minority in their own province.

Even Andrew Scheer, the country’s Conservative leader and a close ally of Mr. Ford, has edged away from the premier on this issue.

If Mr. Ford once knew little about the province’s French speaking community, that’s not likely the case now.

In December, protests swept communities with francophone populations. Long used to battling the province, including a successful effort nearly 100 years ago to repeal the law banning French teaching in school, the leaders of several groups of French speakers said they are now organizing new efforts.

They include a legal challenge to reverse the provincial government’s latest plan.

“My organization was born to fight,” said Carol Jolin, a retired teacher who is currently president of the Assemblée de la Francophonie de l’Ontario. “We’ll keep the pressure on until we have an answer.”

Exactly how many French speakers there are among Ontario’s 14 million people is not entirely clear. Statistics Canada, the federal census agency, counted 550,000 in 2016. Mr. Jolin’s group, which uses a different definition, puts it at 744,000.

Since Britain defeated French forces in Quebec City in 1759 to take control of what became Canada, there have often been tensions over language, virulent anti-French campaigns and a legacy of discrimination and prejudice. Among Canada’s 36 million people, French speakers total 6.8 million in Quebec with another 1 million living outside the province. In Quebec, English speakers number about 700,000.

Whatever the number, Ontario’s French-speaking residents tend to be concentrated in eastern Ontario near the Quebec border, in southwestern Ontario communities that were founded during the French colonial era and in sparsely settled northern Ontario, particularly Sudbury. Jobs created by logging and mining, combined with the opening of a transcontinental railway in the 19th century, drew settlers from Quebec to Sudbury.

Serge Miville, who teaches Franco-Ontario history at Laurentian University in Sudbury, said that Roman Catholic groups provided money to resettle in the area to Francophone Quebecers, who had earlier gone to New England in search of work.

Today, about a quarter of the city’s overall population of 161,000 is French. But the distribution is uneven. A series of amalgamations turned Sudbury into a collection of communities scattered over more than 1,100 square miles of forest, mine sites and lakes.

Despite their community’s British-sounding name, about 60 percent of the residents of Chelmsford, for instance, which is about 20 minutes drive from downtown Sudbury, are French.

At the lunch counter she runs with her father inside the Place Bonaventure shopping mall in Chelmsford, Catherine Gravelle said that many of her elderly customers speak little or no English.

“English is dominant in the city of Sudbury, but we’re all French around here,” she said after preparing a takeout order for an omelet. While her two children attend school in French and her husband is also French, the language situation is less clear cut at home where English and French blend together. 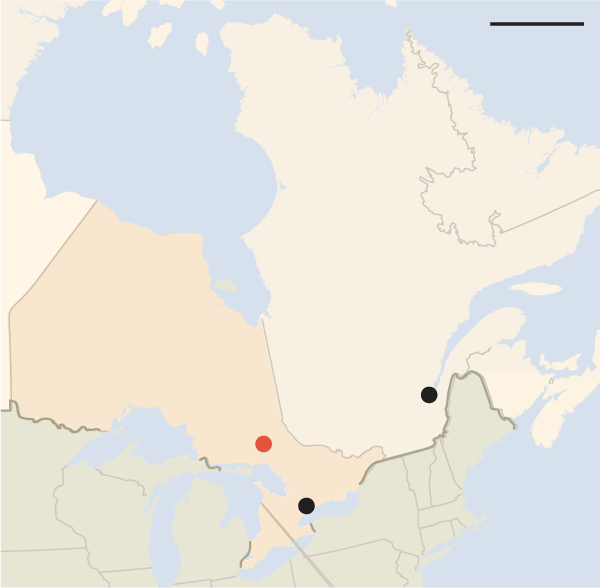 “It’s a bit of a weird setting,” she said. “It would be nice to speak one language.”

Ms. Truax, whose company publishes books by French Canadian authors from outside Quebec, said that she is largely able to lead her life in French in Sudbury even if it’s not always easy.

“The language that I speak has got a poor status or standing in Ontario. Not only the language, it’s also the culture,” said Ms. Truax, 64. “Because of that, here are many small daily battles to be won if I want to live en français.”

Many of those battles in Ontario have been around education. Ms. Truax is from the first generation of francophone Ontarians who were able to attend all of high school in French. The now-abandoned plan to build a French-language university in Toronto, which was created by the previous Liberal government, was widely seen as the final step in a campaign dating back to 1890.

The province currently has three bilingual universities, including Laurentian, although exactly what that means varies both by field of study and campus.

Marie-Pierre Héroux, a third-year Canadian history major at Laurentian, who is from a French speaking farm town east of Ottawa, attends all of her classes in French, something that is impossible for students in sciences. But English dominates life at her residence and around campus.

After Mr. Ford announced the cuts, Ms. Héroux said she was in tears.

“I’m in history, right, so I learned about all the battles that had been fought,” she said. “I never thought I was going to live one like that in my life.”

Ms. Héroux advertises her passion as she walks around campus. A piece of green felt and a piece of white felt, the colors of Franco Ontario, are pinned to the front of her jacket.

On her backpack, a button shows the stylized trillium and fleur-de-lis of the Franco Ontario flag, surrounded by a slogan that translates as “We are … We Will Be.” The flower symbols reappear on her right forearm in a tattoo.

The province’s French-speaking areas have generally supported either the Liberal or New Democratic Parties. But in the last election, a francophone Conservative was elected to the provincial legislature from a predominately French speaking constituency in Eastern Ontario. east of Ottawa. But that member of provincial Parliament, Amanda Simard, has since quit the party over the cuts and now sits as an independent.

As he has with other contentious issues, Mr. Ford has backed off somewhat on his plans.

Among other things, he abandoned plans to downgrade the ministry for French services to a government office and he hired a adviser on French issues.

But Mr. Ford and Caroline Mulroney, his Quebec-born attorney general who is the minister responsible for francophone issues, both remain adamant that cutting the province’s budget deficit makes a French university impossible.

The government referred questions to Ms. Mulroney. Jesse Robichaud, her spokesman, said that the government remains “committed to proceeding with the very important initiative of a university by and for francophones in Toronto when Ontario is in a position to do so with the sustainable financing needed.”

Like many francophone Ontarians, Mr. Miville’s unaccented and fluent English hides his French-language upbringing in Smooth Rock Falls, Ontario, a former pulp mill town with a large French population. But like many other francophone Ontarians, he makes no attempt to hide his frustration with Mr. Ford’s cuts.

“Whenever we’re trying to climb up this ladder to be accepted as a legitimate societal group, stuff like this happens.” Mr. Miville said in a cafe in downtown Sudbury where the handful of clients on a bone-chilling morning were a mix of English and French speakers.