Only a Locked Door Stopped a Massacre at a German Synagogue 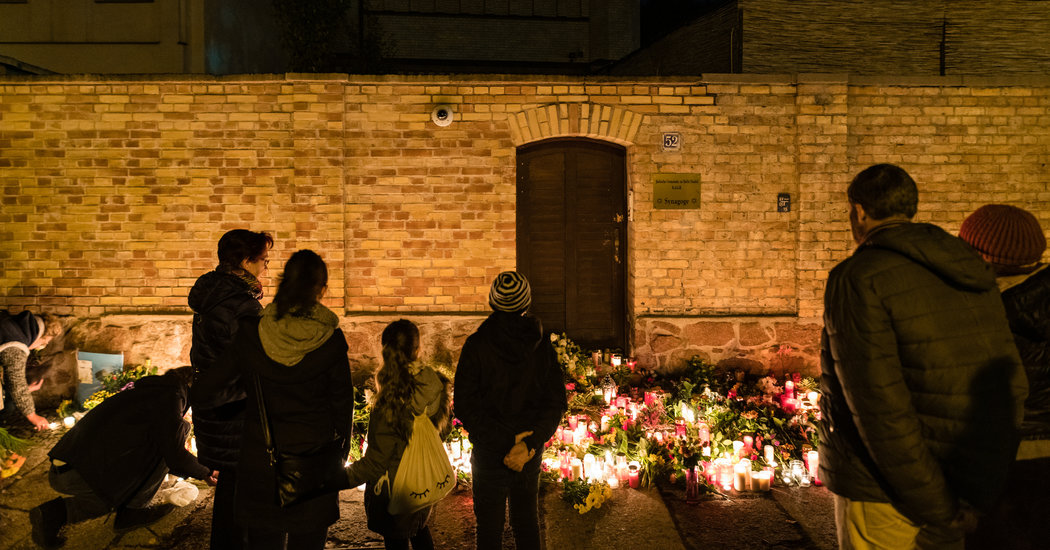 HALLE, Germany — Were it not for a dark wooden door, the authorities say, Stephan Balliert may have succeeded in carrying out a massacre of Jews he had planned to broadcast live around the world. He chose Yom Kippur, knowing the synagogue in Halle, Germany, would be full.

But during every service, the thick, narrow door, its outside handle removed, was locked from the inside. It served as the only protection for Halle’s Jewish community from the outside world. On Wednesday, it spared the lives of 51 Jews from the area and a group of young, international visitors, including 10 Americans, who had come to be with them on the holiest day on the Jewish calendar.

On Thursday, bouquets of flowers and candles lay on the flagstones of the sidewalk outside of synagogue. They served as memorials to the two victims of the massacre that wasn’t — but an event that nevertheless shattered Germans’ belief that the lessons of the Nazi past had immunized them from global, internet-bred hatred espoused by right-wing attackers in Christchurch, New Zealand and El Paso, Tex.

“This brutal crime is a disgrace for our entire country,” Horst Seehofer, the country’s interior minister, said. “With our history, something like this should not happen in Germany.”

Mr. Seehofer vowed to increase security measures, including extending laws that would allow the authorities to monitor digital communication to help prevent further threats such as those, they say, posed by Mr. Balliert, who was arrested after fleeing the scene in Halle, in eastern Germany.

In a hate-filled screed he published online, Mr. Balliert, 27, made clear that he had chosen his target hoping to kill as many Jews as possible. Footage from a camera that he had strapped to the helmet he wore showed him planting explosives that appeared not to detonate, in an attempt to breach the synagogue door. He then fired at the door shortly before noon on Wednesday.

Cursing and muttering as it failed to budge, he instead turned his gun on a woman passing by, shooting her in the back. Identified only as Jana L., 40, and as a lover of traditional German music, she crumpled to the ground. He later fired two more shots at her, before driving to a nearby kebab shop.

Inside the synagogue, Ezra Waxman, a math student from Boston who is studying at the Technical University of Dresden, said the congregation was in the middle of the service when they heard a big “boom.” He thought something had fallen over, or one of the older men had collapsed.

They stopped the service after another loud noise, “and then something that sounded like machine-gun fire,” he said.

At that point, Max Privorozki, the head of the congregation, sent most of the worshipers to another windowless room, while he barricaded the door. He then checked in with the volunteer who monitors the security camera at the door.

The fuzzy images showed a heavily armed attacker on the other side. They immediately called the police. It was three minutes after noon. By the time the police arrived, eight minutes later, Mr. Balliert had driven away, said Holger Stahlknecht, the top security official for Saxony-Anhalt State.

“It was a miracle that the door held,” Mr. Privorozki said in an interview on Thursday. “I cannot imagine what would have happened if it had not.”

In a manifesto, written in English and published on the internet before he carried out the attack, Mr. Balliert said he had considered attacking a mosque, but decided Jews posed the greater threat.

“If I fail and die but kill a single Jew, it was worth it,” he wrote in the manifesto that was found by researchers at the International Center for the Study of Radicalization and Political Violence, a research organization at King’s College London. “After all, if every White Man kills just one, we win.”

Thwarted at the synagogue, as a kind of fallback he drove from to a nearby kebab shop, where Rifart Tekin, a father of two small children, was about to prepare a sandwich.

Mr. Balliert threw a homemade grenade against the door, then shouted and opened fire. He killed Kevin S., a 20-year-old German fan of Halle’s soccer team, who worked nearby and was on lunch break with a colleague.

“I still hear of the man’s voice — it’s stuck in my head,” said Mr. Tekin, who is from Turkey.

Mr. Balliert then returned to his car and fled the scene, but the police had caught up with him by then. The officers opened fired, grazing him in the neck, but Mr. Balliert got away and fled to a nearby town, Wiedersdorf.

There, he abandoned his car, which the authorities said was packed with about two pounds of explosives, and forced a taxi driver to give him his vehicle and headed south on a local highway.

After Mr. Balliert got into an accident with the taxi, the police arrested him and federal prosecutors took over the investigation, on suspicion of murder “under special circumstances.” It was shortly after 1:30 p.m.

Footage from the camera mounted on his helmet helped the authorities piece together the sequence of events, said Mr. Stahlknecht, the security official. It also served as evidence of the scope with which the attacker envisioned his crime.

“He wanted to have a worldwide effect,” Peter Frank, Germany’s federal prosecutor said at a news conference on Thursday. “He wanted to mimic similar acts that happened in the past, and he also wanted to incite others to copycat his acts.”

During the confused chase, those who were worshiping inside the Humboldt Street synagogue continued with prayers and songs, infused with an energy of resilience and perseverance.

Only later did they learn that, while they had escaped unscathed, two people had died.

“Our community was saved by a miracle by a door that wouldn’t open,” Mr. Waxman said. “That is juxtaposed with tragedy of two people losing their lives.”

Officials in Saxony-Anhalt, where Halle is, said Mr. Balliert did not have a criminal record and had not been on the authorities’ radar as a potential extremist. Little other information about him was known on Thursday.

Mr. Franks said his office faced “a lot of questions” about the suspect, including how he was radicalized, how he secured the materials to build the weapons and explosives used in the attack, and whether he had any supporters.

In Benndorf, the town outside of Halle where Mr. Balliert lived in an apartment with his mother, nobody seemed to know him. Sandra Kalkanis, who runs a Greek bistro said, “Even at the Easter festival where the whole village turns out, no one ever saw him.”

Jewish leaders demanded on Thursday to know why their appeals for increased police presence around the synagogue had been ignored. While Jewish institutions in most large cities in Germany have a round-the-clock police detail, that was absent in Halle.

Local police officers said there had been no threats posed to the synagogue in the past five years, and officials at the state level had accepted their assessment that it would suffice if officers passed by on occasion.

But Mr. Seehofer, the interior minister, said he would assess whether the county needed an updated security concept for synagogues in view of the recent rise in anti-Semitic attacks. Germany experienced at least 1,800 anti-Semitic crimes in 2018, a 20 percent increase over the previous year, according to German officials.

“We vowed, never again,” Mr. Seehofer said. “This government will do everything possible so that Jews can live again in this country without threat or fear.”

But the expansion of a more globalized, digitized version of right-wing extremism is challenging a system that has long been accustomed to monitoring local neo-Nazi networks. German authorities have been slower to respond to the growth of right-ring extremist channels online.

German security officials’ response has been weaker “when it comes to message forums like 4chan and 8chan and this new, more diffuse and ideologically more promiscuous far-right extremism,” said Peter R. Neumann, a professor of security studies at King’s College.

Schimon Meyer, 31, who was inside the synagogue with his wife, Luba, said safety was not his main concern on Wednesday, although he knew it was Yom Kippur. “Historically it’s the day when the Jewish people have been most targeted,” he said.

When worshipers were finally escorted out of the synagogue and onto a bus, they continued their songs, surprising the bus driver, Ms. Meyer said. At the hospital, they finished the service, even blowing the shofar, or ram’s horn, to mark the end of Yom Kippur at sundown, she added.

“We wanted to show that we weren’t defeated,” Ms. Meyer said, “but that we defeated the situation.”