One chart suggests Tesla could have trouble breaking higher

Tesla’s rally appears to have stalled.

After surging more than 25 percent in the fourth quarter, the electric car maker has stumbled 13 percent this month.

“It’s been range-bound, and it’s really been going on for over four years now,” Matt Maley, equity strategist at Miller Tabak, told CNBC’s “Trading Nation” on Wednesday. “The stock is trading just below $300. That’s exactly where it was September of 2014.” 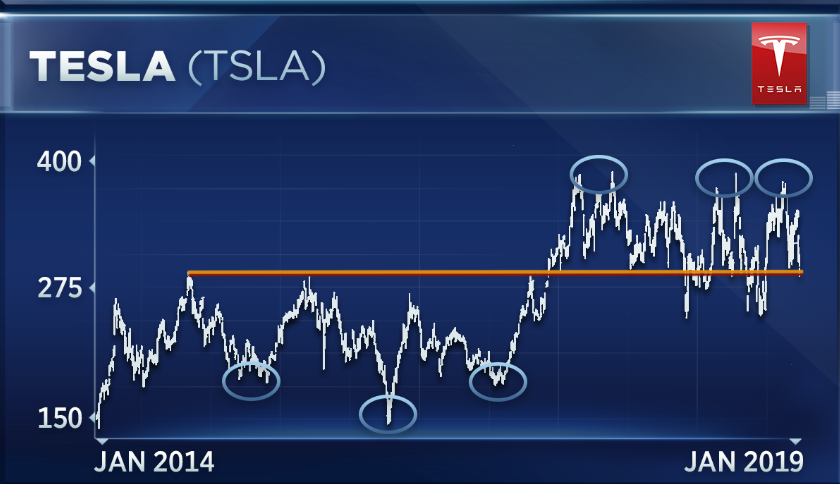 Tesla hit a high point of $291.42 that month more than four years ago. It now trades just over 1 percent below that level.

The stock has had some wild swings to go nowhere in recent years, adds Maley.

“When you get a stock that can fall 40 to 50 percent within a range and rally 30 percent, that’s a certain amount of risk involved. But four years later, you end up with a net-no move, zero gain,” he said.

The options market also has doubted that Tesla can break out, says Stacey Gilbert, head of derivative strategy at Susquehanna.

“I would call the flow that we’re seeing now ‘cautiously pessimistic,'” Gilbert said on “Trading Nation” on Wednesday. “Most of the flow seems to be leaning short whether that be the short interest which is roughly 20 percent here or just some of the options activity that we’re seeing.”

Tesla is one of the most heavily shorted stocks on Wall Street. It has short interest at 20 percent of its float, meaning investors have bought short positions on the expectation its stock will decline.

“On the downside, where we’re seeing investors draw a line in the sand, either closing out of short stock positions or willing to purchase Tesla shares here seems to be around that $250 to $270 level,” added Gilbert. “The sentiment continues to lean slightly bearish here.”

A drop to $250 represents a 13 percent decline for Tesla shares from Wednesday’s close. Its stock last touched that level in October but has not traded solidly below there since March 2017.