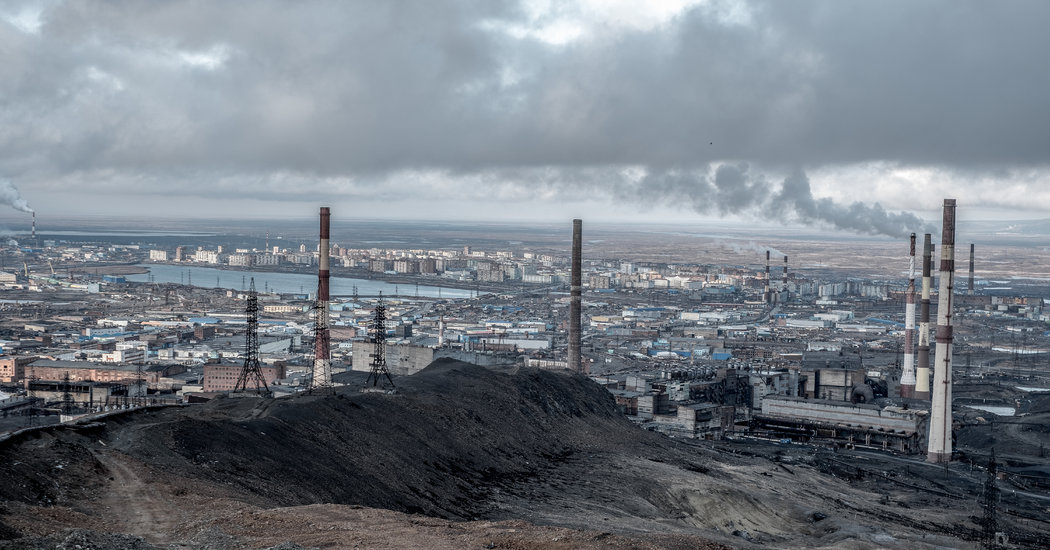 NORILSK, Russia — On a screen, the California sun beams through the palm fronds and the Walk of Fame gleams underfoot. This island of mines and smokestacks in the tundra has high-speed internet now, so Andrei Kurchukov watches videos about America.

Videos by one of his favorite YouTube personalities, Marina Mogilko, feature interviews with fellow Russian expatriates in the United States. “Los Angeles,” she tells her one million followers, is “where Russian dreams come true.”

“I watch her and think, alas,” Mr. Kurchukov said. “So what we’re showing about the rotting West is false.”

Closed to foreigners, unreachable by road and shrouded in darkness for 45 days a year, Norilsk, an Arctic nickel-mining hub of 180,000, is Russia’s most isolated major city. Lacking reliable digital communication with the rest of the country — “the continent,” they call it — residents used to fly home with external hard drives full of downloaded books and movies after their trips out.

Then, two years ago, the city’s mining giant, Norilsk Nickel, strung a fiber-optic cable across 600 miles of tundra and under the vast, icy Yenisey River. Amid fireworks and a rock concert in the central square, cheaper, faster internet suddenly replaced a slow and shaky satellite link as the city’s main data connection to the rest of the planet.

That turned Norilsk into a petri dish for a slow-motion but radical change pushing ever deeper into Russia’s hinterlands. The relatively uncensored internet is replacing Kremlin-controlled TV as the public’s main window onto the world. And as it does so, the carefully crafted image of a resurgent Russia and a decadent, devious West is becoming more difficult for Moscow’s spin doctors to maintain.

“When the internet was slow, I knew less about this bad stuff happening on the continent,” said Anastasia Oleynikova, a 49-year-old housewife, walking her three dogs on a muddy lakefront track flanked by huge, rusting pipes. Now, “It’s becoming sad and depressing to think: What has our country come to?”

An Instagram account called Norilsk Today that often posts pictures of dirty tap water and uncollected trash along with snide commentary — “At least they tell us on television that our lives are wonderful” — has amassed 54,000 followers, nearly one-third of the city’s population. With the complaints out in the open, the authorities are sometimes forced to respond.

“At the direction of the acting prosecutor,” a typical announcement in the municipal newspaper reads, “an examination has been conducted based on information posted on the social network known as ‘Instagram’ on the network known as ‘the internet.’ ”

After President Vladimir V. Putin took power in 2000, he quickly grabbed control of all of Russia’s main TV channels. Drubbed into obedience, they piped an increasingly strident narrative of a newly assertive leader facing down the West into nearly every household across the country’s 11 time zones. Critical viewpoints remained accessible online, but that mattered little from the Kremlin’s perspective: In 2014, when Mr. Putin annexed Crimea, 90 percent of Russians told independent pollster Levada that television was their primary source of news.

Over the last few years, public opinion researchers have seen a shift. This year, only 72 percent of Russians told Levada that TV was their main source of news, while the share of respondents who relied on social media to keep abreast of current events roughly doubled to 32 percent since 2014.

Even a government-run pollster, FOM, reported that the share of Russians who trust TV news fell to 36 percent in 2019, from 63 percent four years earlier.

The Russian government is spending millions to expand high-speed internet access to far-flung areas. At the same time, it has worked to expand its internet propaganda operation, criminalized insulting the government online, and consulted with China about controlling the web. But all that has not stopped online videos from the opposition leader Aleksei A. Navalny and other Putin critics from racking up tens of millions of views; those aged 18 to 24 are now more likely to turn to YouTube than to television for daily information about current events, Levada found.

The internet boom at first passed Norilsk by. The city, built in inhuman conditions by Gulag prisoners in the 1930s, sits next to the world’s largest nickel deposits, 200 miles north of the Arctic Circle. Metals leave the city’s sulfur-dioxide-belching smelters by railway for an Arctic Ocean port. Citizens, their livelihoods bound up with the mines, find it hard to leave at all. With no roads connecting the city to the outside world, constructing a land-based internet connection never made economic sense.

Residents adjusted. They created an intracity computer network that, among other things, allowed locals to download pirated movies and TV shows without connecting to the wider web. Going on vacation, several said, meant sitting in a hotel room, updating smartphone apps and taking in the bounties of the online world, even if the beach beckoned. Gamers who managed to get online to play “World of Tanks” — a popular Belarus-made computer game — learned to time their moves to take into account the delay caused by the city’s slow satellite link.

Leonid Pryadko, a miner who enjoys taking pictures in his spare time, used to enlist people leaving Norilsk to bring back downloaded YouTube videos of photography master classes, which he then shared with the city photo club. But he never sought out political content, and he said he would have never used up precious megabytes from his limited internet plan to download it.

Then, on Sept. 22, 2017, Norilsk Nickel finished a yearslong effort to string a bundle of 48 hair’s-width optical fibers over the frozen tundra, 600 miles from the city of Novy Urengoy. Part of the impetus was to modernize the company’s business processes. But a section of the 40 gigabit-per-second link was set aside for the general public, and the era of what residents call “the big internet” began.

Facebook, YouTube and Instagram boomed. Even two years later, the Siberian telecommunications provider that services the city, Sibirskie Seti, said that Norilsk residents still consumed nearly twice as much web traffic as their other customers.

But as the internet expanded, political content became harder to avoid — “On YouTube, it’s everywhere,” Mr. Pryadko said. Mr. Yakush found out about this summer’s Moscow protests on an Instagram account specializing in cute animal videos. Mr. Pryadko learned about wildfires in Siberia that the Russian government was criticized for not doing enough to contain.

“I’ve started to worry,” he said, “about the political situation in the country, how everything happens with impunity.”

The regional office of Mr. Navalny, the opposition leader, is 900 miles away, in a basement in the Siberian metropolis of Krasnoyarsk. There, the office’s coordinator, Daniil Markelov, sees the fiber-optic line as an opportunity to penetrate a city so tightly monitored by the security services that passengers arriving on domestic flights have to go through passport control.

Working remotely, Mr. Markelov’s team produced a YouTube video this year telling the story of an allegedly wrongful property transfer engineered by the city’s mayor. The video got so much attention in Norilsk that the mayor, Rinat Akhmetchin, felt compelled to go on public television to deny any wrongdoing.

To Mr. Markelov, the power of YouTube is that people do not have to seek out political content — it comes to them, thanks to the platform’s recommendation algorithm.

From inside Norilsk, the city’s few activists are using the web to gain nationwide attention, creating a way to pressure the mayor’s office and the city’s main employer and polluter, Norilsk Nickel.

“We know we’re being seen, we’re being heard,” said Ruslan Abdullayev, a Norilsk lawyer who often campaigns against pollution and corruption. He said that the local news media used to ignore his complaints, but now that he can more easily reach a national audience online, “I don’t need them anymore.”

Whether greater access to critical information online actually leads Russians to demand more rights from their government remains to be seen. The chairman of the Norilsk City Council, Aleksandr Pestryakov, a member of Mr. Putin’s United Russia party, argued that better internet access had made people more withdrawn and less interested in taking part in public life.

“The internet allows for energy to be released and that’s it,” Mr. Pestryakov said. “Maybe some person would have been ready to say something against the authorities and go out on the street. But the internet lets him do that and stay on the couch by the television, and everything is great.”

Vitaly Bolnakov, a lawyer and activist, used the web to find out how to marry his same-sex partner. The couple last year flew to Denmark, got their marriage certificate, and posted a detailed how-to on a Russian L.G.B.T. online forum.

Asked about his future plans, Mr. Bolnakov jerked his thumb at the miniature American and Canadian flags mounted on his apartment wall. Watching YouTube, he said, has made him more of a “Russophobe.” He sees how often his fellow Russians’ rights are violated by the state and how little his countrymen stand up for them.

The internet will not change the fact that Mr. Putin controls a sprawling security apparatus capable of putting down any revolt, he says. But at least people now find it easier to make fun of their government.

“The internet can’t change anything cardinally, but morally it puts them down,” Mr. Bolnakov said of the authorities. “They’re being laughed at, you understand?”