Norwegian Spy Jailed by Russia Is Free. He’s Angry, Too, but Not at Moscow.

KIRKENES, Norway — Frode Berg says he never meant to be a spy.

Mr. Berg, a silver-haired Norwegian pensioner known by his neighbors to have a soft spot for neighboring Russia, was 60 when an acquaintance in his Arctic hometown recruited him in 2015 to work for Norway’s military intelligence. Over the next two years, on five trips across the border, Mr. Berg acted as a courier — mailing relatively small sums of cash and encrypted memory cards to a woman in Moscow he knew nothing about.

Then, one December morning in 2017 when he was in Moscow, Russian agents swept him up, bundled him into a brown Volkswagen van and sped him to the old K.G.B. headquarters. He spent the next two years in prison where, by his own account, he was treated fairly well.

Now, finally free, Mr. Berg is angry — but not at Russia.

“I was under pressure from the military intelligence service in Norway,” Mr. Berg, a former inspector along the Norwegian border with Russia, said in an interview after his release in a prisoner swap in November. “I trusted them that they will not send me to something dangerous in Russia. And they did.”

Mr. Berg was, by all appearances, a small-time player in a botched intelligence operation. But his tale embodies the tensions emerging as Western countries intensify their hunt for the Kremlin’s secrets.

His arrest has also shaken his hometown, Kirkenes, a prim, fjord-side community in Norway’s far north that has close economic ties with Russia. People in this Arctic seaport just west of the Russian frontier are upset that Mr. Berg, who spent decades promoting cross-border cooperation, had breached the trust those efforts were meant to build. 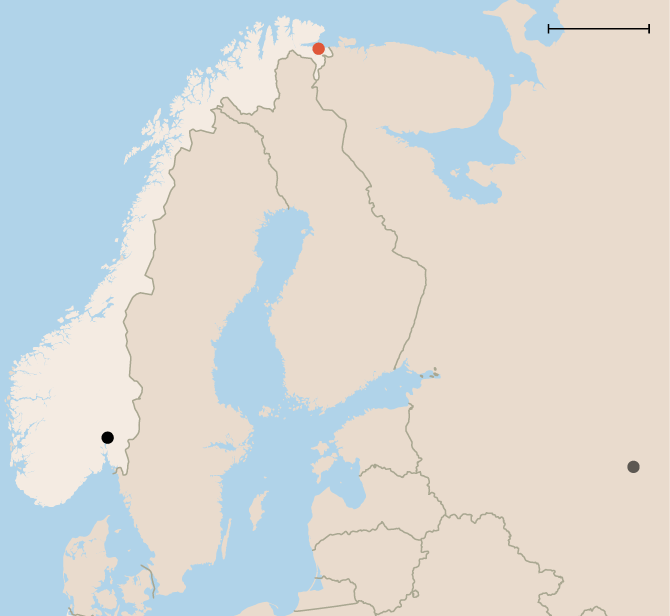 And they are furious that Norway — a NATO ally that abuts Russia in the strategically important Arctic region — has solicited intelligence help from its own citizens who frequently cross the border for business and cultural exchanges.

To NATO, Kirkenes is on the vanguard of East-West confrontation because it is just across the border from the Kola Peninsula, home to Russia’s powerful Northern Fleet and much of the country’s nuclear arsenal.

But to many who live in this isolated region, Russia is primarily a partner, driving their economy thanks to fishermen docking at their port and Russians making day trips to buy diapers and other Western goods.

“We want to promote this region as a region of cooperation, bringing down walls and building bridges,” said Marit Jacobsen, deputy head of the Norwegian Barents Secretariat, which funds cooperation projects with Russia. “We can handle one Frode Berg, but we cannot handle that many.”

During the Cold War, Mr. Berg was stationed as a soldier in Kirkenes, now a town of about 3,500 people. Sometimes he found himself a few feet from Soviet soldiers on patrol, but he never made eye contact.

He later became a border inspector and, after communism collapsed, he and his colleagues gave boots, uniforms and food to their suddenly impoverished Russian counterparts.

It was an open secret, known to Mr. Berg, that this politician worked for Norway’s military intelligence agency. Mr. Berg trusted him, so he agreed without asking questions.

“What is this about, really?” Mr. Berg says he later asked another intelligence officer, in the Norwegian capital, Oslo, who gave him digital memory cards and more cash to mail.

“‘It’s very important that you can do this for me, Frode,’” the man in Oslo responded, according to Mr. Berg. “You’re a good Norwegian, and helping us.”

Mr. Berg said he tried to quit in spring 2017. But tantalized by an expenses-paid trip to glittering Moscow at Christmastime, he agreed to one last mission.

On Dec. 5, 2017, men in civilian clothes swept up Mr. Berg as he walked out of the ritzy Metropol Hotel and brought him to the offices of Russia’s spy agency — the Federal Security Service, or F.S.B.

“‘We respect you, but we had to arrest you,’” one of the officers said, according to Mr. Berg. “‘We know everything.’”

After the arrest, Mr. Berg’s friends in Kirkenes were convinced he was an innocent man who had been framed by Russia or was the victim of a terrible mistake.

But realizing that his sole chance of freedom was a speedy conviction and a spy swap, Mr. Berg admitted a few months later, through his lawyers, that he had worked as a courier — shocking his supporters who thought he was innocent and had hung a “Help Frode Come Home!” banner in the Kirkenes main square.

“When you are a border citizen, you have to act like a border citizen,” said one of those supporters, the Kirkenes pastor Torbjorn Brox Webber. That means “not to get so involved with the intelligence service.”

Mr. Berg said he was treated much better than other inmates at Moscow’s Lefortovo Prison, where he spent his two years behind bars. He watched TV, became a fan of the Russian pop star Olga Buzova and read up on the crimes his fellow prisoners were accused of in the tabloid Moskovsky Komsomolets, delivered daily to his cell.

He counted 14 meetings with counterintelligence officers from the F.S.B. When they asked if he wanted anything, Mr. Berg said McDonald’s. So they started bringing a McChicken sandwich, fries and Coke Zero. Afterward, he said, the officers sometimes poured him a shot of cognac.

Rather than pressing him for information, they seemed intent on showing off how much they knew, he said. They even identified the nondescript building in Kirkenes where Norway’s military intelligence held secret meetings.

At one point, the conversation got so friendly, Mr. Berg recalled, that one officer told him: “‘Frode, don’t forget. I’m the investigator and you’re sitting in prison. You’re a spy.’”

In trying to secure Mr. Berg’s release, Norway’s government faced an obstacle: Its prisons had no Russian spies to trade. Eventually, its NATO ally Lithuania, which was holding two Russians on espionage convictions, agreed to a three-way deal.

On the way to the airport in Moscow, the four-car F.S.B. convoy carrying Mr. Berg and the two Lithuanian prisoners to freedom made a stop. It was at a McDonald’s.

Back on home soil in November, Mr. Berg told Norwegian journalists that the F.S.B. had named others who, unknown to him, had supposedly worked for Norwegian intelligence.

The comment jolted Rune Rafaelsen, the mayor of Kirkenes: “I thought, ‘Who is that?’”

Mr. Rafaelsen said he has “chosen not to look behind my shoulder” and question whether his neighbors are spies. Others are less certain.

Distrust, they said, has become unavoidable in the wake of the Berg case, especially as rumors fly about more undercover officers and other recruitment attempts.

“Let them recruit their people elsewhere,” said Willy Bangsund, a wrestling coach who said he had turned down cooperation requests from Norwegian intelligence.

Norwegian intelligence agents, Mr. Bangsund and others said, had become overzealous in trying to recruit locals to help them gain information about Russia, putting at risk their efforts to deepen economic and cultural ties with their neighbor to the east.

As a result, few in Kirkenes praised Mr. Berg for undertaking a high-risk mission in the name of national security. Rather, they said, he should have understood what he was getting into, and that fellow Norwegians may face greater suspicion when they travel to Russia as a result.

“There was no pistol at his head,” Mr. Rafaelsen said, referring to Mr. Berg’s decision to cooperate with Norwegian intelligence. “I don’t think the pressure was so hard that he couldn’t have said no.”

A parliamentary committee is investigating possible wrongdoing in Mr. Berg’s case, though the government hasn’t publicly confirmed links between him and the military intelligence service. Norway’s Defense Ministry, which oversees the service, declined interview requests, as did the prime minister’s office.

“For 70 years Norway, has pursued a balanced, pragmatic and transparent approach of deterrence and dialogue toward Russia,” the state secretary of defense, Tone Skogen, said in a statement.

Mr. Berg says he takes no pride in his clandestine missions and two years in prison in the service of his country.