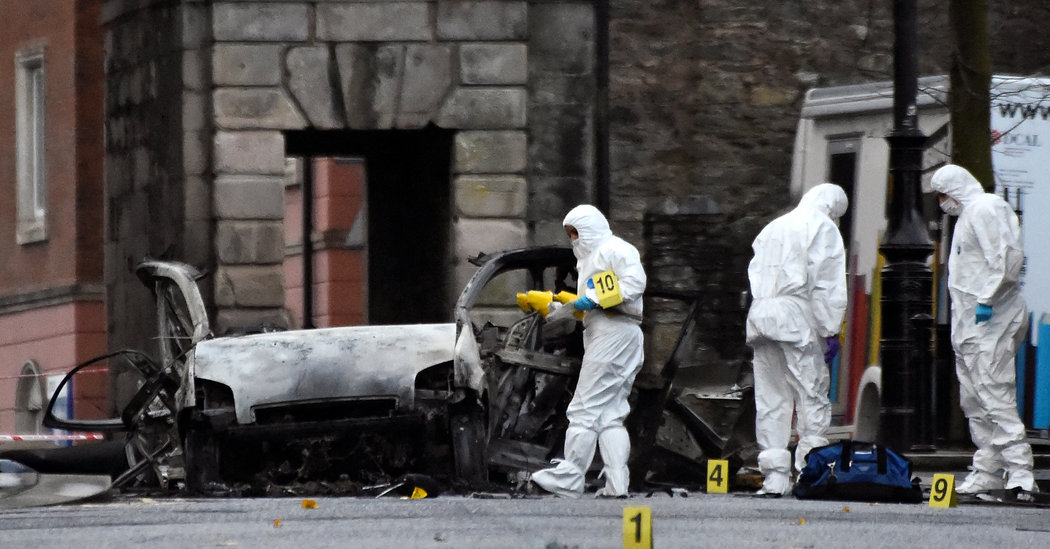 DUBLIN — The police in Northern Ireland arrested four men on Sunday in connection with a car bombing outside a courthouse in central Londonderry the night before that drew condemnation from across the political spectrum.

The bomb, which had been planted in a hijacked delivery van, caused no casualties or major damage. But after receiving a warning, the police had little time to evacuate children from a youth club nearby and hundreds of people from a luxury hotel and a masonic hall before the device exploded around 8.10 p.m. Saturday.

The explosion followed a pattern of attacks in the city attributed to republican groups opposed to the peace agreement that ended the “Troubles” in Northern Ireland 20 years ago.

The delivery van used in the attack had been hijacked shortly before in Brandywell, a nearby nationalist area of the city. The police arrested two men in their 20s, then later on Sunday detained two others, age 34 and 42, Reuters said. The police did not identify them or provide a possible motive.

The police later posted CCTV footage of the bomb blast on Twitter.

Assistant Chief Constable Mark Hamilton called the car bombing “unbelievably reckless.” He said officers were inspecting a suspicious vehicle outside the courthouse on Bishop Street at 7:55 p.m. Saturday when a 15-minute warning was received by phone.

“Thankfully, the attackers failed to kill or injure any members the local community out socializing and enjoying the best of what the city has to offer,” Mr. Hamilton said. “The people responsible for this attack have shown no regard for the community or local businesses. They care little about the damage to the area and the disruption they have caused.”

Politicians from both sides of the Irish border condemned the attack.

Arlene Foster, a former first minister of Northern Ireland and the current leader of the Democratic Unionist Party, said on Twitter that the attack “only hurts the people of the City” and had been “perpetrated by people with no regard for life.”

The foreign minister of the Republic of Ireland, Simon Coveney, said on Twitter that there was “no place and no justification possible for such acts of terror, which seek to drag Northern Ireland back to violence and conflict.”

“Derry is a city moving forward, and no one wants this type of incident,” said Elisha McCallion, a Sinn Fein member of Parliament from the area. “It is not representative of the city. I would encourage anyone with information about this incident to bring it to the police.”

The Provisional I.R.A. was the largest and most active armed nationalist faction during the Troubles. From 1968 to 1998, more than 3,500 people died in bombings and gun attacks linked to deep divisions between the predominantly Protestant unionists who supported Northern Ireland’s belonging to the United Kingdom and the mostly Roman Catholic nationalists who favored a united Republic of Ireland.

The Provisional I.R.A. formally stood down after the Good Friday peace agreement of 1998, but a number of splinter groups refused to recognize the accord and have continued to organize attacks on local rivals and on security forces, killing two British soldiers, two Northern Ireland police officers and two prison officers over the past 20 years.

Republican dissidents were blamed for an increase in unrest and rioting in the Bogside area of Derry City (which unionists prefer to call Londonderry) last summer, in which the police and motorists were attacked with rocks and sometimes gasoline bombs.

Declan Power, a Dublin-based security expert and lecturer, said that sporadic and usually localized violence could be seen as an attempt by splinter groups to recruit young followers and maintain an appearance of political relevance.

“Dissident groups like the Real I.R.A. and the Continuity I.R.A. are active but not in a strategic direction,” he said. “Most of their activity is related to holding turf for organized criminal activities like drug dealing, and directed at feuding with rivals.”

“Every now and then there is an attempt to do something like this,” he said of the bomb Saturday night, “to retain their credibility as serious republican revolutionary movements.”

Such violence is now receiving more attention than before, he said, because of fears that Britain’s likely exit from the European Union could lead to the reintroduction of a hard border between Northern Ireland the Republic of Ireland, disrupting the constitutional arrangements that underpin the Good Friday agreement.