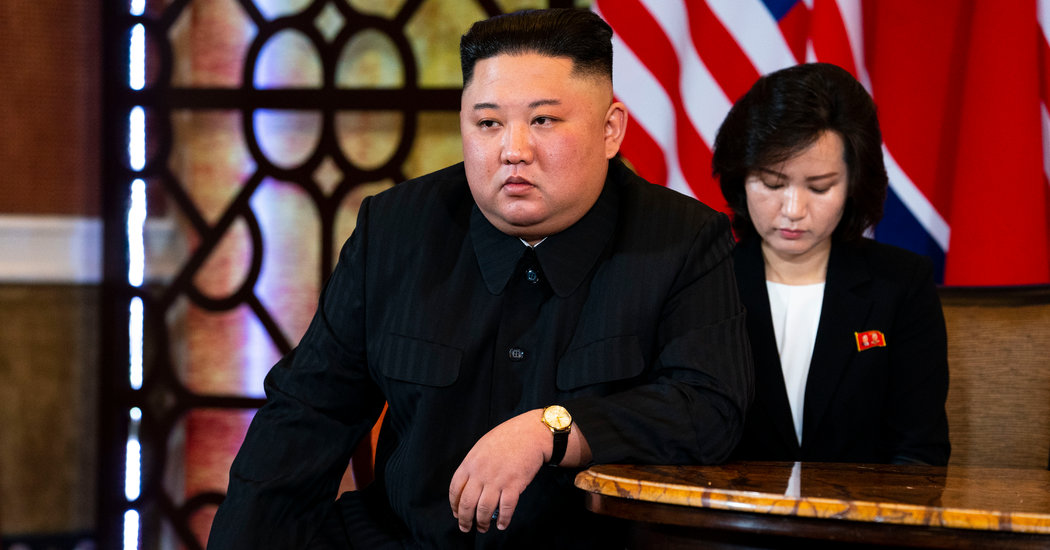 SEOUL, South Korea — North Korea’s leader, Kim Jong-un, ​said his country no longer felt bound by its self-imposed moratorium on testing nuclear weapons and long-range ballistic missiles, its official media reported on Wednesday, the strongest indication yet that the country could soon resume such tests.

Mr. Kim also said the world would witness a new strategic weapon “in the near future,” according to the North’s official Korean Central News Agency, though no details were provided.

North Korea has not conducted a long-range missile test or a nuclear test in more than two years. Mr. Kim had announced his moratorium at a time when he hoped negotiations with the United States — and his budding personal relationship with President Trump — would prompt the United States to begin lifting crippling sanctions.

Mr. Trump, who has met Mr. Kim three times, has often cited the North’s restraint as a major diplomatic achievement.

The North had set a Dec. 31 deadline for the United States to make at least some concessions, complaining that its 18 months of diplomacy with Mr. Trump had yielded limited results. And for weeks, American officials feared Mr. Kim might test an intercontinental ballistic missile, or ICBM, to make his point.

During the party meeting on Tuesday, Mr. Kim said his country “will shift to a shocking actual action” that will make the United States “pay for the pains sustained by our people,” the North Korean news agency said.

It remained unclear if a test was imminent. It is possible that Mr. Kim’s announcement on Wednesday is, by itself, the warning shot he wants to send to prod Mr. Trump, on the eve of a presidential election year, to begin lifting sanctions.

All of the North’s state media gave prominent coverage to Mr. Kim’s remarks, indicating that they may have replaced an annual New Year’s Day speech that he had been expected to deliver. In its New Year’s Day edition, the North’s main party newspaper, Rodong Sinmun, filled its front page with Mr. Kim’s remarks, including an exhortation to his people to “foil the enemies’ sanctions.”

Mr. Kim, who had hoped to shift his focus to finally reviving his country’s economy, has been growing frustrated in recent months as his negotiations on denuclearization with the Trump administration have stalled.

He made the latest remarks about the moratorium on Tuesday, the last day of a four-day meeting of the Workers’ Party Central Committee, the North’s highest decision-making body. The remarks threatened a major shift in North Korean policy.

The unprecedented rapprochement between the United States and North Korea began nearly two years ago, after months of nuclear and ICBM tests and threats from both sides. Two months after Mr. Kim announced his moratorium — saying he had now completed his nuclear force — the two leaders met in Singapore in June 2018 in the first summit meeting between the two countries.

The summit ended with a commitment to “work toward complete denuclearization of the Korean Peninsula,” but the pledge was never understood the same way by the two sides. The administration insisted that meant Mr. Kim would give up his nuclear weapons, his stockpile of fissile material and his missiles, but the North argued that it also meant the United States would withdraw troops and offshore ships and submarines that could launch nuclear weapons.

Subsequent negotiations have failed to close the gap.

On Tuesday, Mr. Kim addressed denuclearization saying, “If the U.S. persists in its hostile policy toward the D.P.R.K., there will never be denuclearization on the Korean Peninsula,” using the initials for the North’s formal name, the Democratic People’s Republic of Korea. “The scope and depth of bolstering our deterrent will be properly coordinated depending on the U.S. future attitude to the D.P.R.K.”

That remark, and Mr. Kim’s reluctance to clarify when North Korea would officially resume testing, indicated that he might still be open to further negotiations with Washington.

While the North has demonstrated that its fleet of missiles could likely reach parts of the United States, the country still has not shown it could design a nuclear warhead that would survive the heat and huge forces that come with re-entry of a warhead into the atmosphere.

Secretary of State Mike Pompeo said on Tuesday night that the Trump administration continued to hope that Mr. Kim would “take a different course.”

“President Trump came into office with the threat of war from North Korea real, and a true concern for the American people. He took a tack — we said we can deliver a better outcome for the people of North Korea,” Mr. Pompeo said in an interview with Fox News.

“We’re hopeful that Chairman Kim will make the right decision, and he’ll choose peace and prosperity over conflict and war,” he added.

Washington had dismissed the Dec. 31 deadline imposed by the North as “artificial,” urging Pyongyang to maintain a dialogue and not revert to the provocations that had raised fears of war on the Korean Peninsula two years ago.

Since taking over his country following the death of his father and predecessor, Kim Jong-il, in 2011, Mr. Kim has accelerated his country’s nuclear weapons and missile programs. North Korea has conducted the last four of its six underground nuclear tests under Mr. Kim. It flight-tested three intercontinental ballistic missile tests in 2017.

As his diplomacy with Mr. Trump has failed to bring about the benefits he had sought, especially the lifting or easing of sanctions, Mr. Kim has sounded increasingly impatient. North Korea broke an 18-month hiatus in weapons tests in May, launching 27 mostly short-range ballistic missiles and rocket since then and warning of more provocative tests to come. In December, it conducted two ground tests at its missile-engine test site to bolster what it called its “nuclear deterrent.”

At the same time, Mr. Kim has exhorted his people not to expect any immediate easing of sanctions and to brace for a prolonged struggle against the Americans by building a “self-reliant” economy.