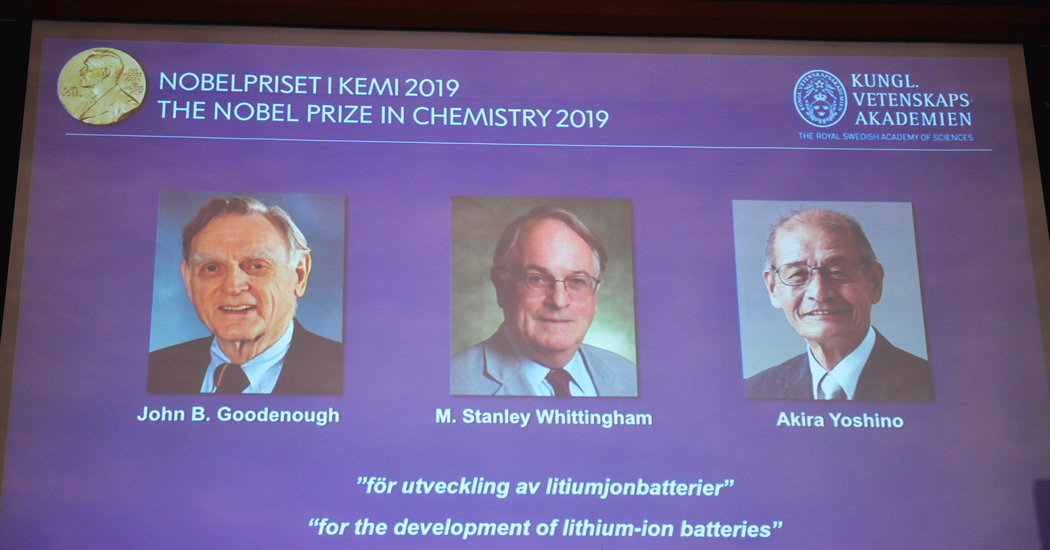 The Royal Swedish Academy of Sciences in Stockholm on Wednesday awarded this year’s Nobel Prize in Chemistry to three scientists — John B. Goodenough, M. Stanley Whittingham and Akira Yoshino — for their development of lightweight lithium-ion batteries.

Their work led to the creation of powerful, lightweight and rechargeable batteries that you might be relying on to power a smartphone or laptop computer that you’re using to read this article today. Lithium-ion batteries not only enabled the development of portable electronics, they also made it possible to power electric cars, store energy generated by solar and wind power and improved lifesaving medical devices.

“We can see an enormous, dramatic effect on society because of this fantastic battery,” Olof Ramström, a member of the committee that selected the winners, said during an online broadcast.

Why did they win?

In the early 1970s, a growing oil crisis inspired many scientists, including Dr. Whittingham, to begin searching for improved ways to store energy from renewable sources and power electric cars. This required rechargeable batteries, but there were only two types available at the time: heavy lead or nickel-cadmium batteries.

He discovered that titanium disulfide, not used in batteries until this point, was an extremely energy-rich material that could be used in a battery for its positive electrode, or cathode — think of the side of your battery with the plus sign.

For the negative electrode in his battery — the side with the minus sign — Dr. Whittingham decided to test lithium, which is the lightest metal and releases electrons easily. This resulted in the first functional lithium battery.

Unfortunately, Dr. Whittingham’s new battery had a problem. When it was repeatedly charged, thin strands of metallic lithium would grow out from the negative electrode. Sometimes, the strands would grow long enough that they reached the cathode and short-circuited the battery, and could cause an explosion.

Dr. Goodenough discovered that the cathode would have greater potential if it were made with a different material and showed that cobalt oxide, which had layers to hold pockets of lithium ions, could produce a higher voltage.

Dr. Yoshino then eliminated pure lithium from the battery, instead using only lithium ions, which are safer. He created the first commercially viable lithium-ion battery in 1985.

Why is the work important?

Lithium-ion batteries have revolutionized electronics — and our lives — since they were introduced to the market in 1991. The scientists’ discoveries led to the development of sustainable and renewable batteries that were lightweight enough to make portable electronics a staple of modern life.

The batteries contribute to reducing the impact of climate change by enabling a switch from fossil fuel energy to renewable and sustainable forms.

“Development of these batteries is a huge step forward, so that we can really store solar and wind energy,” said Sara Snogerup Linse, the chairwoman of the Nobel Committee for Chemistry.

Who are the winners?

John B. Goodenough, 97, is a professor at the University of Texas at Austin. Even before being awarded the Nobel, he was known for his work that led to the invention of the rechargeable lithium-ion battery. With the award he becomes the oldest Nobel Prize winner, but is still active in research.

M. Stanley Whittingham, 77, is a professor at Binghamton University, State University of New York. On his biography page for the university, he said that his goal was to improve the storage ability of electrochemical devices in order to increase the viability of renewable solar and wind energy, as well to improve the range and cost for electric vehicles.

Akira Yoshino, 71, is an honorary fellow for the Asahi Kasei Corporation in Tokyo and a professor at Meijo University in Nagoya, Japan. A profile last year described him as “the father of lithium-ion batteries,” and he was given the prestigious Japan Prize for his work on the subject.

Speaking to reporters after the announcement, Professor Yoshino said the news was “amazing” and “surprising.” He said that “curiosity” had been the driving force behind his work, but added that he was pleased that his contributions could help fight climate change.

“Climate change is a very serious issue for humankind,” he said, calling lithium-ion batteries “suitable for a sustainable society.”

Who won the 2018 Nobel for chemistry?

The prize last year went to Frances H. Arnold and George P. Smith, both of the United States and Gregory P. Winter of England, for work that tapped the power of evolutionary biology to design molecules with a range of practical uses, such as new drugs, more efficient and less toxic reactions in the manufacture of chemicals, and plant-derived fuels to replace oil, gas and coal extracted from the ground.

Dr. Arnold was only the fifth woman to win the prize.

Who else has won a Nobel Prize this year?

When will the other Nobel Prizes be announced this year?