No, Trump did not win in Nevada. 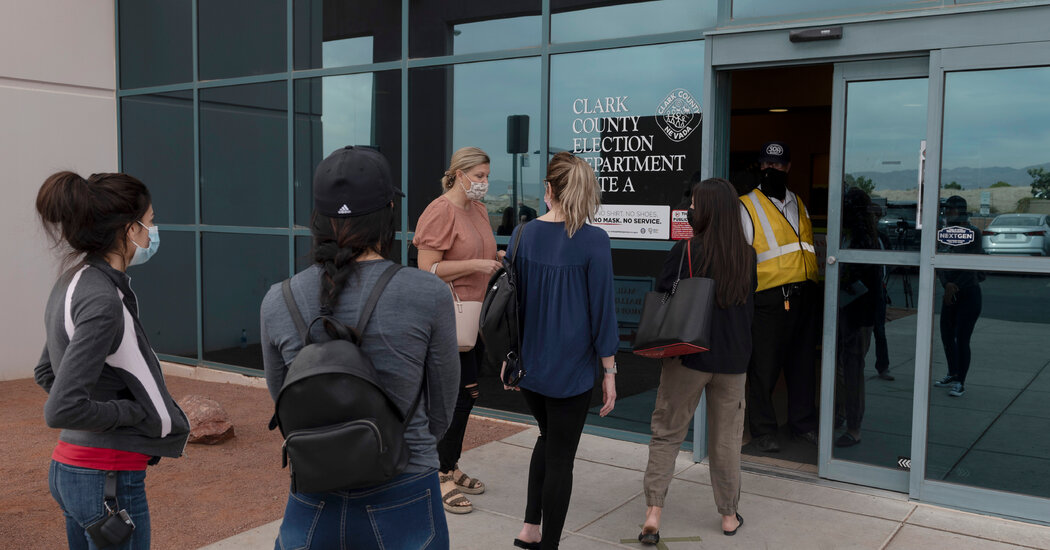 President Trump claimed a “big victory” on Monday night after officials in Clark County, Nev., voted to rerun one local race that had a margin of just 10 votes.

In the president’s words, officials found “large-scale voter discrepancy” and “did not have confidence in their own election security.”

In fact, the news in Clark County was bad for the president; a review of the votes found a relatively tiny number of problems; and the campaign of the Republican in the close race repudiated the president’s claims about the election’s security.

The most significant news for President Trump in Nevada on Monday was that officials in Clark County, by far the state’s most populous county, certified their presidential election results, confirming that the president lost by more than 90,000 votes in the county.

In a so-called canvass of the county’s results, in which election officials check the vote counts against other voting records, officials found 936 discrepancies, or less than 0.1 percent of the 974,185 votes in Clark County. That rate will not affect the president’s deficit of more than 33,000 votes in Nevada. President Trump’s statewide deficit is smaller than his gap in Clark County because he won Nevada’s rural counties.

Clark County commissioners voted on Monday to certify the results of all of the county’s elections except one: a race for the county commission seat that represents District C, an area with 332,000 residents that includes parts of Las Vegas. The margin in that race was just 10 votes. In that district, election officials found 139 discrepancies, in line with the .09 percent rate of discrepancies to votes countywide. The county commission called for a special election.

“There is no election that goes without discrepancies,” Joe Gloria, Clark County’s registrar of voters, told county commissioners on Monday. With just 10 votes separating the two candidates, “it’s very difficult to get through that without having the discrepancies being larger than the margin of victory.”

Discrepancies in Clark County included cases in which signatures on mail-in ballots could not be verified or in which voter check-in books at polling places did not align with the number of votes cast there, often the result of human error, Mr. Gloria said.

“When we find discrepancies, we report them, and when the number of discrepancies is larger than the margin of victory, we hold a runoff election,” the Clark County Election Department said in a statement. “As the voters can see, this issue did not affect any other outcomes, and to claim otherwise is simply untrue.”

There was no sign of “large-scale” voter discrepancies, said Lisa Mayo-DeRiso, campaign manager for Stavros Anthony, the Republican, who will now compete in the special election for the Clark County commission seat against Ross Miller, the Democrat, who led the first election by 10 votes.

“It’s not an accurate statement,” she said of the president’s claim that Clark County officials did not have confidence in the election’s security. “We have not had any problems or difficulties with the Clark County Election Department.”