Because streaming services only release viewership numbers selectively, and because each one uses its own methodology, it can be hard to compare the popularity of different streaming shows and movies.

So Nielsen, which provides the standard ratings for traditional TV (and is working to combine those ratings with streaming data), is offering some apples-to-apples comparison today at CES by releasing its own lists of the most popular streaming content in 2020, across Netflix, Amazon Prime, Disney+ and Hulu.

These lists are limited to U.S. viewership. And unlike Nielsen’s linear ratings, they don’t just reflect the total number of people watching, but focus instead on the total number of minutes watched. That also makes for a striking contrast with the ratings that Netflix releases, which count the number of households who watched at least two minutes of a program, but don’t distinguish between someone who watches two minutes versus two hours versus 20 hours.

Still, the TV series lists are absolutely dominated by Netflix, while Disney+ puts in a good showing on the movies list. The other services don’t crack any of the three Top 10 lists. 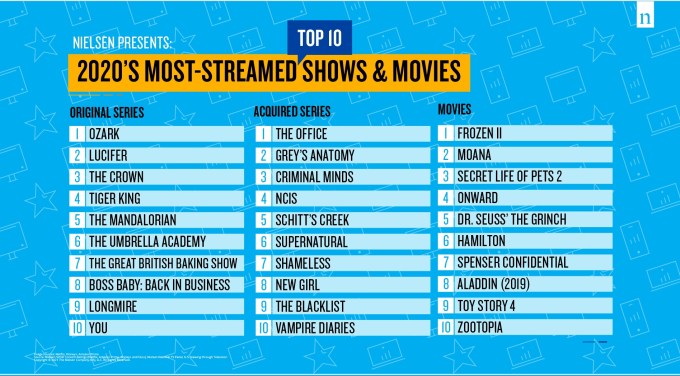 Beyond releasing these lists, Nielsen is announcing a new product designed to measure viewership of theatrical video on-demand, a.k.a. movies that are released for rent or purchase online. While studios should already have access to basic purchase data for these titles, Nielsen says it can provide “the entire media food chain” with more detailed information about things like the age, gender, ethnicity and geographic territory of who’s watching.

As this unprecedented pandemic continues to influence consumer behavior, perhaps even through a prolonged state of recovery waves, being able to measure and help clients appropriately monetize new revenue streams has never been more crucial. A bigger question might be what will audiences do following any recovery, how the behavior adopted during stay-at-home orders might influence habits when consumers have the ability to go back to theaters to enjoy that experience and how content creators will leverage data to make the best decisions regarding distribution platforms in the future.