Netflix, Amazon on track to be the best trades of this decade

Netflix and Amazon, the disruptive internet pair loved by Wall Street, could make history if they keep up their stellar performances this year.

Barring a major downturn, the two stocks will end up as the best-performing assets of the decade. Since the start of 2010, Netflix has risen more than 4,000 percent while Amazon is up more than 1,100 percent.

The two tech giants would join iron ore, the Nasdaq Composite, the Nikkei 225 in Japan and gold as the top-performing major assets throughout one decade since 1970 on Wall Street, according to Alpine Macro, a research firm based in Montreal. 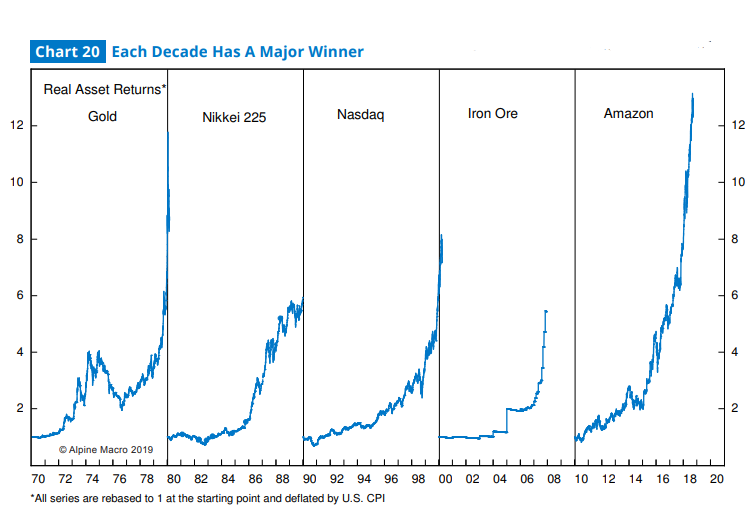 “A reoccurring phenomenon in our investment lives is that every decade there seems to be a big winning asset class or market,” Alpine Macro chief global strategist Chen Zhao said in a note. “The question is, what will be the next big winner in the coming decade? Unfortunately, no one can predict that with any precision. However, all the previous winners share some common attributes.”

“First, they are the result of major economic shocks,” he said. “Second, they are often the least expected asset classes or markets.”

Gold prices ended the 1970s more than 10 times higher than where they were at the start of the decade. Gold is seen as a hedge against inflation, which more than doubled in the U.S. during that decade, Federal Reserve data.

In the 1980s, the Japanese Nikkei 225 surged by a multiple of 6, or about 500 percent. Japan’s benchmark stock index rose as the country became a manufacturing and economic powerhouse. A subsequent asset price bubble has left the country struggling.

The Nasdaq Composite, meanwhile, benefited from the dot-com bubble in the 1990s as consumers widely adopted the internet, which led to the emergence of several online companies.

The Chinese boom was the best macroeconomic story on the globe in the 2000s, leading to high demand for industrial metals like iron ore. Iron ore is used to produce iron, which is used in buildings, furniture, cars and other goods. Iron ore rose by nearly 500 percent in between 2000 and 2007, just before the financial crisis.