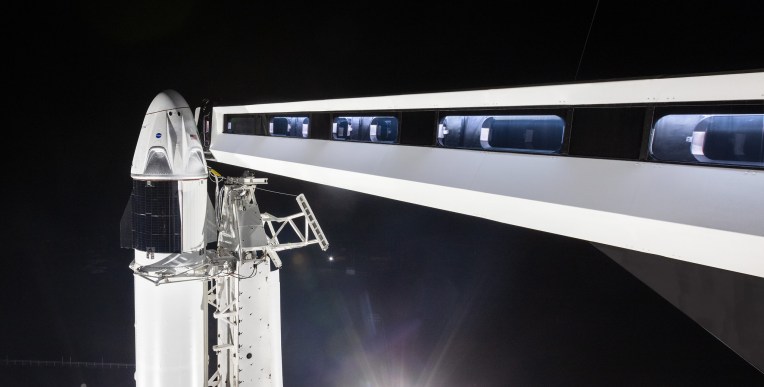 Bridenstine kicked off with some brief remarks about the importance and priority of the crew launch mission, which he said both he and Musk are in agreement that the commercial launch of American astronauts is “the highest priority” of the various projects both his agency and SpaceX have under development.

He and Musk then went into some detail about where the program is now, and what remains to be done to get to an actual crewed flight — the first of which will be a test flight. Bridenstine’s comments essentially took 2019 off the table for this to happen, with the administrator saying he was “very confident that in the first part of next year, we will be able to launch American astronauts on American rockets,” and that if “everything goes according to plan,” it would take place in the first quarter of 2020.

Musk noted that in order for SpaceX to have confidence in its Crew Dragon launch system’s reliability for a crewed mission they would have to have run 10 successful drop tests using the newly developed Mark 3 parachute system for the capsule “in a row.” Bridenstine said that based on the current schedule, SpaceX could run as many as 10 drop tests total using the Mark 3 system between now and the end of this year.

This new Mark 3 system features much stronger lines connecting the sheets of material used in their construction, Musk said, thanks to switching away from nylon to a material called “xylon,” which is three or more times stronger, per the CEO. The new version also uses a new stitching pattern compared to Mark 2 for additional strength.

Both Musk and Bridenstine were keen to point out that the timelines discussed, including the 2019 target for the crewed flight that SpaceX has been working toward until now, are “not deadlines,” but are instead a “best guess” in Musk’s words, based on the current state of affairs. Said state of affairs can change quickly, and Bridenstine added that “there are still things we could learn [in testing]” that could alter the timelines later than the first part of next year.

As for Crew Dragon product, Musk said SpaceX is ramping to a cadence of producing a new capsule around once every three or four months, a rate it hopes to achieve in order to “get in a cadence of operational flights to the space station.”

Bridenstine also addressed the tweet he posted in late September regarding SpaceX’s Starship program update (posted in full below).

“As the NASA Administrator, I have been focused on returning to realism when it comes to costs and schedules,” he said. “And a lot of our programs have not been meeting costs and schedules. And this has been developing over time. And a lot of these programs are, you know, five years old, 10 years old […] so what we’re trying to do is get back to a day where we have realistic costs and schedules, and so I was signaling, and I haven’t done it just to SpaceX, but to all of our contractors that we need more realism built into the development timelines.”

Still, Bridentstine clarified that NASA definitely supports the Starship program as well, even if it’s prioritizing Crew Dragon at the current moment. “I want people to make no mistake: NASA has an interest in seeing Starship be successful,” he said, while also pointing out NASA’s recent investment in Starship via its “Tipping Point” project funding.