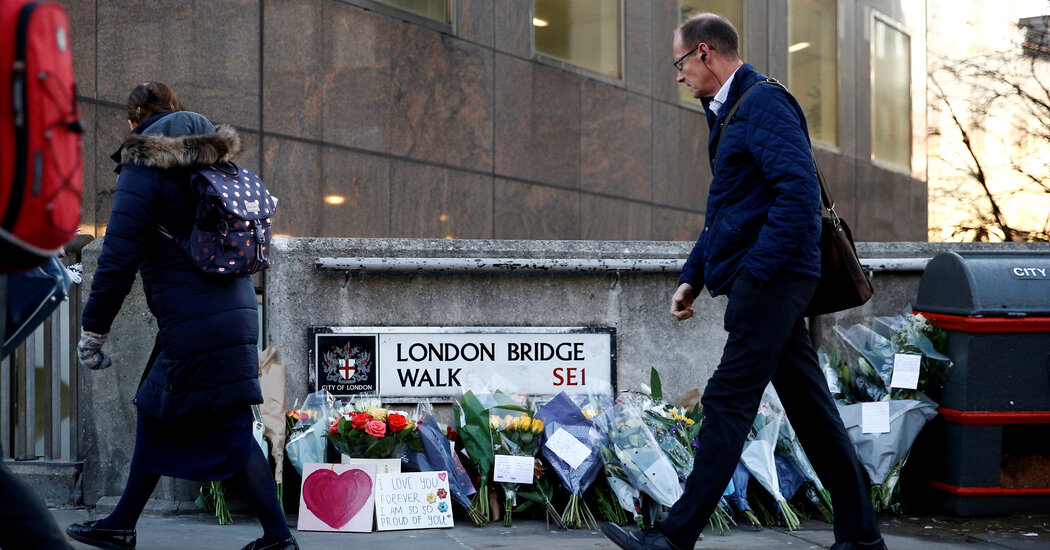 LONDON — Queen Elizabeth II has approved a rare royal pardon for an inmate convicted of murder who used a narwhal tusk to help stop a terrorist attack in which two people were killed before the assailant was killed by the police on London Bridge.

The decision to pardon the murderer, Steven Gallant, was in recognition of “his exceptionally brave actions,” which “helped save people’s lives despite the tremendous risk to his own,” a spokeswoman for the Ministry of Justice said in a statement on Monday. If a parole board approves, Mr. Gallant’s minimum 17-year sentence would be reduced by 10 months.

The attack in November 2019 began at a prisoner rehabilitation conference when a former inmate in attendance stabbed and killed two young rehabilitation advocates, Jack Merritt and Saskia Jones, and fled before eventually being subdued on London Bridge. Three others were also injured before the assailant, Usman Khan, 28, was fatally shot by police. Mr. Khan had served eight years for a terrorism-related offense but had been released in December 2018.

Mr. Gallant, who was imprisoned in 2005, was among a crowd of people who banded together to take the assailant down with an unconventional weapon: the narwhal tusk, which had been a wall decoration at Fishmongers’ Hall, the historic building that hosted the conference. He was in the hall for the day on a prison day-release program when he heard noises and saw injured people.

He found Mr. Khan holding two large knives and wearing a fake bomb around his waist. “He was a clear danger to all, so I didn’t hesitate,” Mr. Gallant said, in a statement in January.

He used a chair and the tusk, passed to him by a civil servant, to confront the attacker, chasing him onto London Bridge and helping restrain him before police arrived. Male narwhals, a species of whale, have a single straight tusk that can grow up to nine feet long; this one was about five feet.

The pardon was welcome news, his lawyer, Neil Hudgell, said, adding that Mr. Gallant hoped to be a “positive example” to others after turning around his life in prison. “He is passionate about using his knowledge and experiences to help others steer away from crime,” he said. Mr. Gallant will be eligible for parole next June, though a parole board will have the final say on whether he can be released early.

He was convicted along with another man in 2005 of murdering Barrie Jackson, a firefighter in the coastal city of Hull. Mr. Jackson’s son said he had “mixed emotions about his release,” reported The Daily Mirror. “But what happened at London Bridge goes to show the reality that people can change.”

Mr. Gallant has apologized to Mr. Jackson’s family and said he accepted his punishment. “Nobody has the right to take another’s life,” he said in the January statement, adding he had vowed to better himself and “never to turn to violence again.”

The father of one of the two victims of the terrorist attack, David Merritt, told The Daily Mirror that the pardon was “fully” deserved. He had turned his life around in prison, Mr. Merritt said, and was close to his son. Mr. Gallant has called Jack Merritt a role model and a friend.

The queen can exercise a “royal prerogative of mercy,” which reduces the penalty for a criminal offense, but rarely does so. Pardons for early release are generally recommended by officials in exceptional situations, such as if a prisoner risks his safety to prevent death or serious injury to another.

Though the queen signs off on the royal pardon, the decision is ultimately in the hands of the government — in this case the Ministry of Justice — said Dickie Arbiter, a former Buckingham Palace spokesman. “By the time it gets to her, it’s a done deal,” he said. “She just rubber-stamps it.”

Though he was not privy to the decision-making, Mr. Arbiter said that Mr. Gallant had risked his own life while out of prison for the day to protect others, which was likely to have helped his case. “He could have just walked away and ignored it, but he didn’t.”

Pardons for those convicted of murder are highly unusual. Before Mr. Gallant, the last significant pardon for murder was given to Sean O’ Callaghan, a paramilitary member of the Irish Republican Army who was freed in 1996.