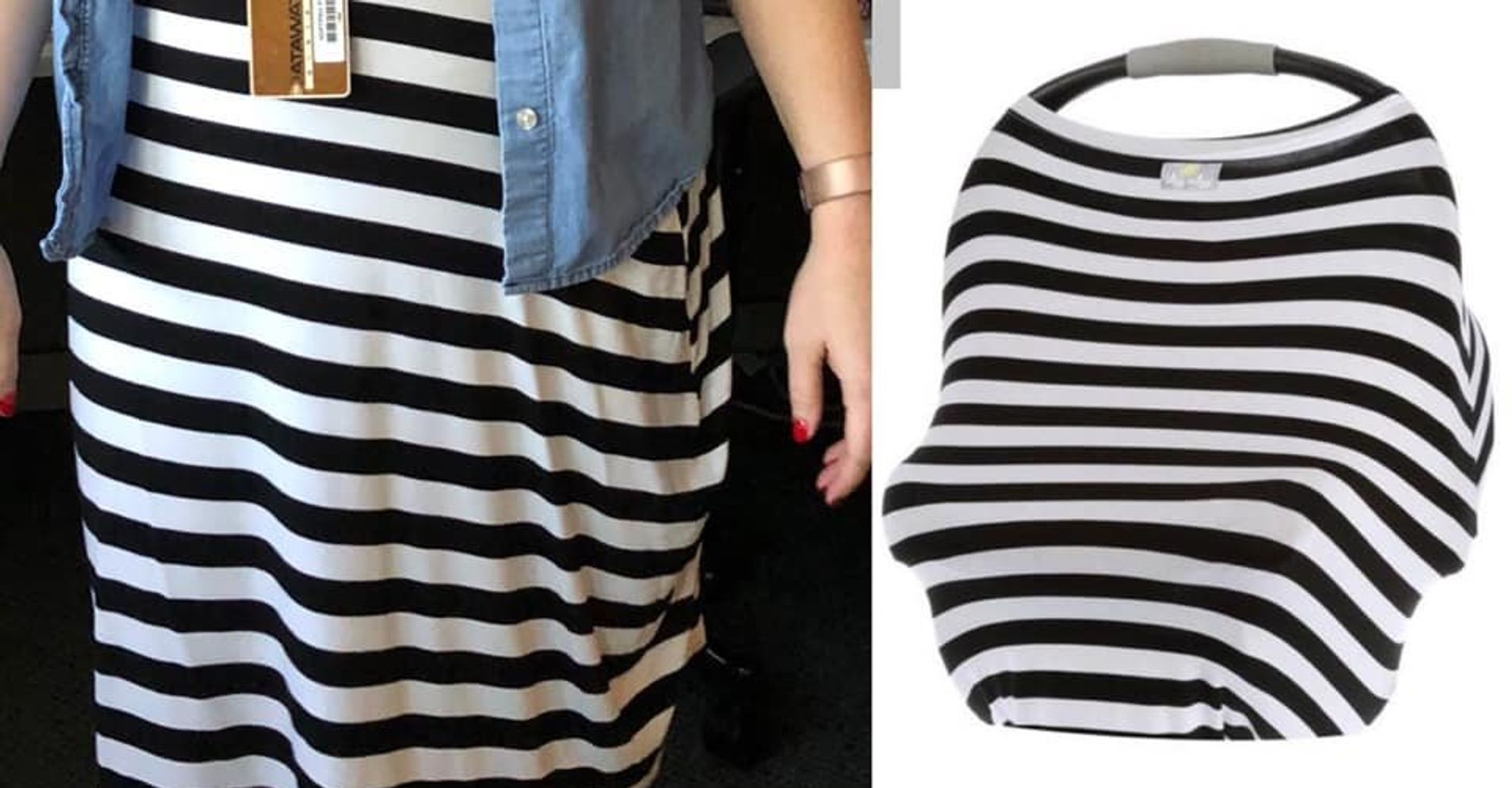 An expectant mother’s sartorial mishap is making people on Facebook laugh out loud.

Blogger and mom-to-be Lori Farrell posted a hilarious photo of her outfit on the social media platform Friday. Specifically, she highlighted her choice of skirt by comparing it with a photo of the garment from the website where it’s sold.

“If you feel like a failure today, just know that I wore a car seat cover a friend gave me because I thought it was a skirt,” Farrell wrote, adding a string of laughing emoji.

The post received more than 56,000 likes, with many moms expressing amusement and support in the comments section.

“I once let my husband borrow what I thought was a warm headband for a chilly outdoor event,” wrote one commenter. “Turns out he wore my black tube bra.” Others chimed in with declarations of ”#MomBrain.”

Farrell told HuffPost her first child is due in June, so she’s been gathering new and secondhand supplies in preparation.

“A friend of mine had messaged me that she had a bunch of baby stuff she was getting rid of,” Farrell explained. “I came home with a car full that day of enough baby clothes to cover our little girl’s first three months. She also gave me a pregnancy pillow, a rock and play, toys, shoes, baby carriers, etc. So when I pulled out the striped thing, I wasn’t really sure what it was. It was not in a package, just mixed in with the clothes and blankets/swaddles.”

On Friday morning, Farrell decided the mysterious striped garment must be a skirt and put it on for work.

“I thought the gathered sides were ‘ruching’ and that it was a maternity skirt ― except I thought the tag was oddly placed in the front,” she said. “I turned the skirt around to hide the tag and headed to work. I joked with my mom on the phone that I wasn’t so sure my skirt was a skirt, but that it looked cute so I didn’t care.”

When she arrived at her job, however, she looked up the brand online and realized her mistake. Indeed, Itzy Ritzy sells accessories like diaper bags and teething necklacesfor parents and babies. And while the brand makes T-shirts geared toward moms, it doesn’t seem to have ventured into skirts yet.

Farrell’s “skirt” was actually the “Mom Boss 4-in-1 Multi-Use Cover,” which parents can use as a cover for car seats and shopping carts, as well as a nursing cover and infinity scarf.

Based on Itzy Ritzy’s Instagram, it’s clear the makers of the cover were amused by Farrell’s mishap.

Farrell said she asked a co-worker to photograph her outfit fail so that she could send it to her mom, but she also decided to post it on Facebook because it seemed relatable.

“I have a blog and a lot of people tell me how they like how I’m always open about every day things so I figured this was just another laugh for my friends,” she said. “My sister suggested I make it public but I did not expect the attention I’ve gotten, by any means. I mean, I was excited when it had 19 shares. It’s now over 50k.”

“I just hope people get a good laugh out of it, which it seems that they have,” she said. “Given that the internet can be cruel, I like that all of the comments have been positive, and I’m making people smile.”