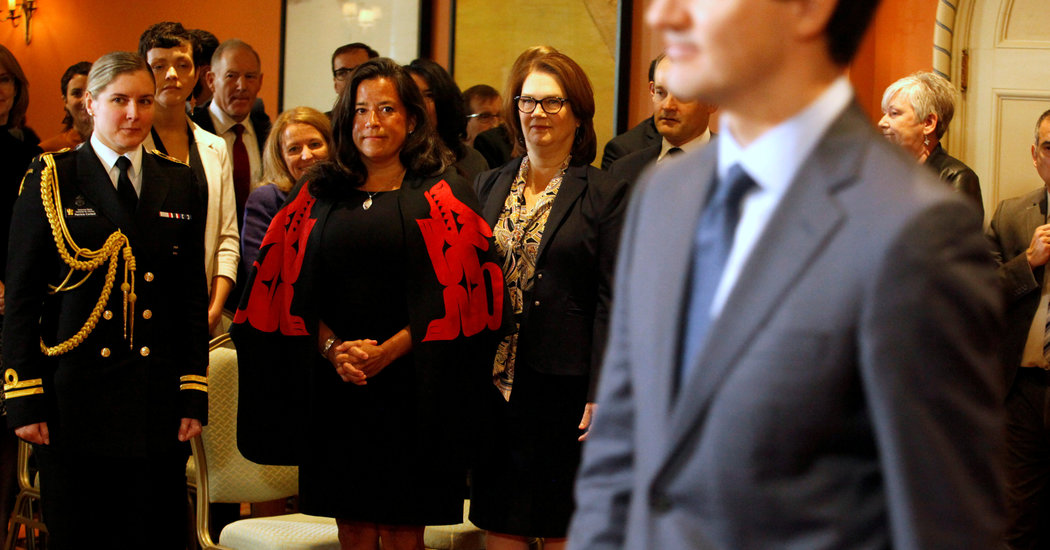 OTTAWA — A cabinet minister at the center of an ethics investigation into Prime Minister Justin Trudeau of Canada abruptly resigned on Tuesday, casting a cloud over his Liberal Party in an election year.

The minister, Jody Wilson-Raybould, gave no reason for leaving her position in charge of veterans affairs. But last week, The Globe and Mail, citing unnamed sources, reported that Mr. Trudeau or his staff had pressured Ms. Wilson-Raybould when she was justice minister to back off the corruption and bribery prosecution of a prominent, Montreal-based engineering company.

According to The Globe and Mail, Ms. Wilson-Raybould was asked to order prosecutors, who are independent of politicians in Canada, to seek a “remediation agreement” with the engineering company, SNC-Lavalin, that would prevent a trial in exchange for payment of a fine.

Ms. Wilson-Raybould has been silent on the question, citing attorney-client privilege, and the criminal prosecution has continued without interruption.

Opposition politicians and others have claimed, without evidence, that Mr. Trudeau demoted Ms. Wilson-Raybould to the veterans affairs job, a less prominent position, as punishment last month.

“When I sought elected office it was with the goal of implementing a positive and progressive vision of change on behalf of Canadians,” Ms. Wilson-Raybould, who will remain a Liberal member of Parliament, said in her resignation letter. She said her resignation from the cabinet “in no way changes my commitment to seeing that change achieved.”

Speaking with reporters in Winnipeg, Manitoba, Mr. Trudeau said that “to be honest, I don’t entirely understand why Jody Wilson-Raybould made the decision she did.” He said that she had never raised concerns with him that she was being improperly pressured, either in recent conversations or last fall, when the incidents are supposed to have occurred.

Mr. Trudeau dismissed the idea that the government had acted improperly toward Ms. Wilson-Raybould. He said that if it had done so, “it was her responsibility to come forward to me this last fall and highlight that to me. She did not.”

He added, “We followed all the rules and standards.”

Alluding to the ethics questions, Ms. Wilson-Raybould said in her letter that she had retained Thomas Albert Cromwell, a former Supreme Court justice, for legal advice on what she can reveal about her conversations about SNC-Lavalin. Mr. Trudeau has separately asked her successor to look into whether privilege can be waived.

Andrew Scheer, the leader of the opposition Conservative Party, said in a statement that the resignation “is a sign of a government in disarray.”

On Monday, following a complaint from two New Democratic Party members of Parliament, the federal ethics commissioner announced that he was investigating Mr. Trudeau’s actions in connection with the SNC-Lavalin prosecution.

It is unusual for cabinet ministers to resign in Canada, particularly during an election year, except for health or other personal reasons. Ms. Wilson-Raybould’s decision may force Mr. Trudeau to rearrange his cabinet for the second time in a month. Harjit Sajjan, the defense minister, will take on the veterans affairs job temporarily.

Mr. Trudeau has repeatedly denied that anyone improperly pressured Ms. Wilson-Raybould. On Monday, he said that he had confidence in her as a minister and recalled a conversation in which he told Ms. Wilson-Raybould that “that any decisions on matters involving the director of public prosecutions were hers alone.”

SNC-Lavalin is facing charges that it paid millions of dollars in bribes to officials in Libya when the country was ruled by Col. Muammar el-Qaddafi. If convicted, the company will not be able to bid on government contracts for 10 years. Some politicians, particularly in Quebec, believe that could ruin the company or force its sale and possible move from Montreal.