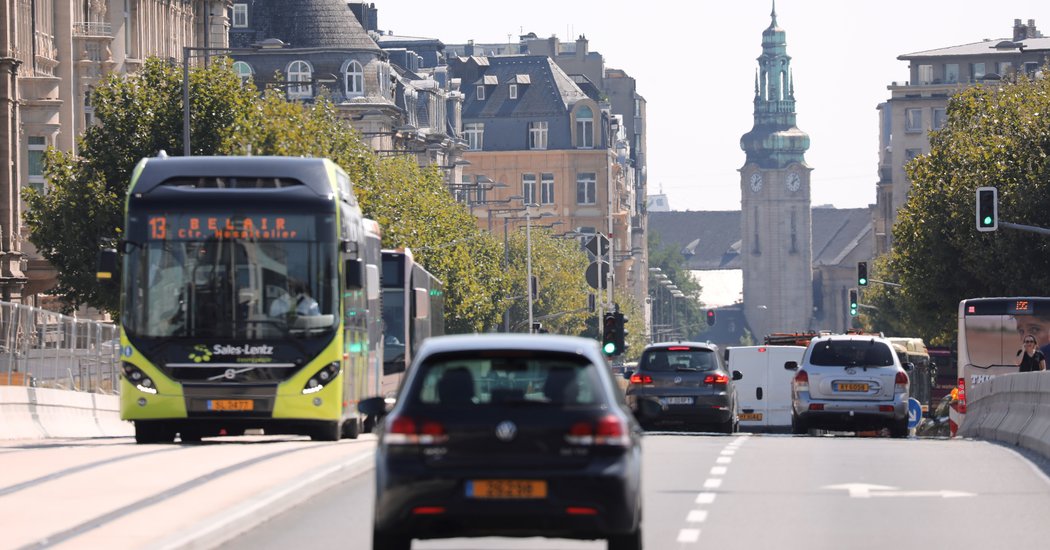 LONDON — Luxembourg is a small country with big traffic jams.

So when Prime Minister Xavier Bettel was sworn in for a second term on Wednesday, his governing coalition promised free mass transit for all, which would make the country the first to offer such a benefit.

Luxembourg is barely larger than a city-state, with a population of about 560,000 — roughly equivalent to smaller European capitals like Copenhagen. But more than 180,000 workers who commute across the border from Belgium, France and Germany. The average salary, of just over 50,000 euros (or $56,000), is almost 40 percent higher than in France, for example.

“It’s basically like a city which has suburbs abroad,” Olivier Klein, a researcher at the Luxembourg Institute of Socio-Economic Research, said by phone on Thursday.

Part of the problem is that Luxembourg already has the highest number of cars for its population in the European Union: 662 for 1,000 people, bringing it closest in the region to the United States, a world leader with more than 800 cars per 1,000 people.

The number of international commuters has doubled in the past two decades, rising more quickly than the country anticipated, Mr. Klein said.

This has caused the kind of congestion that is familiar to those who commute into many big cities. (In New York, for example, the subway system is in such crisis that riders are fleeing to Uber and other alternatives.) Luxembourg’s highways are packed with cars, and overcrowded trains often suffer delays.

But it recently became too much for the quiet rural communities near the Luxembourg border. Driving the 14 miles from the border village of Audun-le-Tiche, France, to the center of Luxembourg City, for example, should take less than a half-hour. But at peak times, the commute stretches to an hour, according to Google Maps. And most commuters don’t share their cars, Mr. Klein said.

To escape the traffic jams, some drivers have taken to traveling on smaller roads, annoying villagers. In May, the mayor of Schengen, the town that gave its name to the borderless area in most of the European Union and that made commuting between countries easy in the first place, decided to close a border road at peak commuting times.

Some cities in Europe and elsewhere already offer free mass transit at certain times and to people like retirees or the unemployed. Others are considering widening the circle to all users. Facing criticism for poor air quality, Germany announced plans this year to test free public transport in some of its busiest cities.

Tallinn, the capital of Estonia, introduced free mass transit for residents in 2013. A year into the project, usage grew 14 percent, but it was mostly pedestrians, not drivers, who made the switch

Traveling by mass transit in Luxembourg is already free for many residents, including students. And the government offers subsidies for others to reduce trave costs.

But the governing coalition said it planned to overhaul tax breaks for commuters, a benefit that has been available based on the distance traveled and not the mode of transport.

This year, Luxembourg budgeted nearly €900 million in public money for its mass transit system, but recovered around €30 million in ticket sales, the prime minister’s Democratic Party said in its manifesto. The savings made on selling and controlling tickets could finance some of the cost of free travel, the document added.

Free mass transit will be available from the beginning of 2020, said Dany Frank, a spokeswoman for the Ministry of Mobility.

People around the world greeted the proposal enthusiastically on social media. Helena Rivera, an architect, said on Twitter, “A day to dream about in London.”

Others pointed out that Luxembourg operated a relatively small network and that the country could be crossed in less than an hour.

While there are advantages to free travel — such as cutting emissions when fewer vehicles take to the road — a 2002 report by the National Center for Transportation Research at the University of South Florida noted that larger transit systems that cannot afford to operate at a loss saw drawbacks, including a rise in vandalism, revenue shortfalls, slower service over all and increased crowds.