Lowe’s is one small drop from violating years-long support, and it could mean trouble

Big box retailers Home Depot and Lowe’s are getting beaten down.

The two are tracking for a weekly loss of at least 2 percent, their first negative week in a month, after J.P. Morgan trimmed its price target on Home Depot. Analysts reconsidered profit estimates on the retailer on softening housing trends and a warning from paint company Sherwin-Williams.

One of those home repair retailer’s stocks is a hair from breaking a key support level, says Todd Gordon, founder of Trading Analysis.com.

“If you take a look at the [Lowe’s] chart, you can see that we are very well contained in a parallel channel,” Gordon said on CNBC’s “Trading Nation” on Thursday. “Lowe’s is actually right on the lows of this three-year uptrend here.”

Gordon says a break below that trend channel at around $90 would spell trouble for the retailer. At $92.05 in Friday’s premarket, the stock is just 2 percent higher than that support. 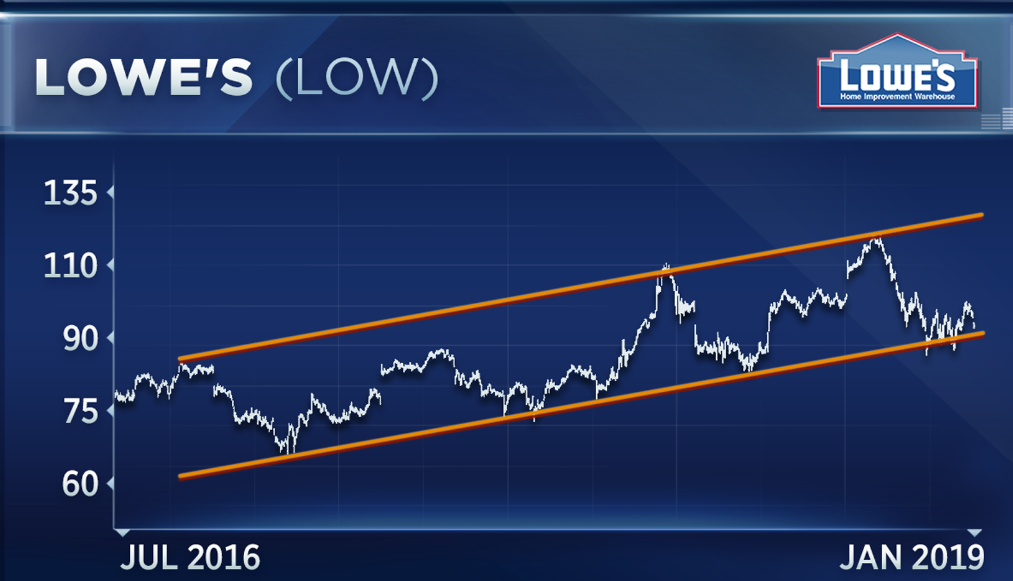 The move to the lower-end of the channel “is interesting, too, because we’re seeing a boost in real estate,” Gordon said. Referring to the real estate investment trust ETF, he added: “The XLRE, as yields are dropping here, there’s rotation into housing. Lowe’s isn’t seeing any benefit from that.”

The REIT sector is the only positive S&P 500 group in the past three months. The XLRE REITs ETF has added 5 percent this month, better than Home Depot’s 2 percent advance and a flat start for Lowe’s.

“When housing prices are going up, that’s good for home-improvement stocks because it gives the consumer the confidence that they need that they can put money into their homes and actually get something in return,” Tepper said on Thursday’s “Trading Nation.”

Of the two stocks, Tepper does have more faith in a Lowe’s breakout.

“Lowe’s is more of a turnaround story, so I think it has more upside. They’ve got a new CEO in place who is revamping the management team, and they’re really focusing now on improving execution and streamlining the business,” he said, referring to Marvin Ellison, who became Lowe’s chief in July.

Lowe’s has performed slightly better than Home Depot in recent months. While Home Depot declined by 13 percent since mid-July, Lowe’s has dropped 8 percent.