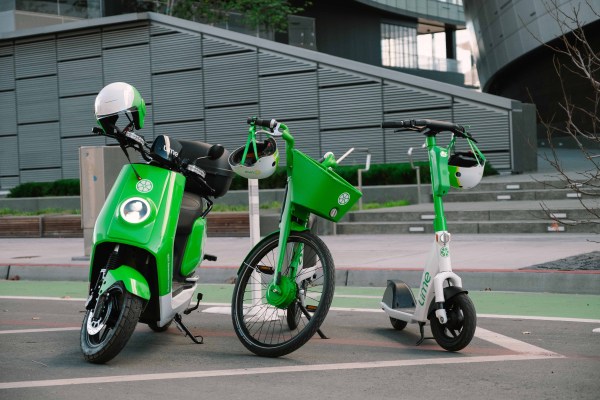 Lime is adding electric mopeds — painted in the company’s signature green — to its micromobility platform as the startup aims to own the spectrum of inner city travel from jaunts to the corner store to longer distance trips up to five miles.

Lime said Wednesday it plans to launch as many as 600 electric mopeds on its platform this spring in Washington D.C. The company is also working with officials to pilot the mopeds in Paris. Eventually, the mopeds will be offered in a “handful of cities” over the next several months.

The mopeds, supplied by manufacturer Niu, are designed for two people and outfitted with tech like infrared-cameras in the helmet compartment that can detect if they’re in use during a trip, an effort aimed at rooting out misuse and increasing safety. Repeat offenders of Lime’s policies, which includes wearing a helmet at all times, will be kicked off the platform. Customers will also be required to take a selfie wearing the helmet at the start of a ride.

The helmets will be supplied by Moon for U.S. customers and Nikko for the European deployments.

The mopeds will have a top speed of 28 miles an hour and be able to travel up to 87 miles on a single charge. Unlike Lime scooters, in which gig economy workers can earn money by collecting, charging and bringing back to city streets, the mopeds will have swappable batteries and be maintained by full-time employees.

While it’s unclear if mopeds have always been part of Lime’s long-term plans, the company’s head of new mobility  told TechCrunch that they’ve been thinking about what the future of electrified urban transportation might include.

“As we’ve grown as a company, we understood that we just needed to follow what our riders were demanding which is further distances,” said Sean Arroyo, head of new mobility at Lime. “The ability to meet any trip, at anytime, anywhere, is something that’s at the foundation for us and so our riders really are the ones that pointed us in this direction.”

Lime CEO Wayne Ting first hinted late last year that a “third mode” of transport beyond scooters and bikes was in the works for the first quarter of 2021 as well as the addition of third-party companies to its platform. Last year, Lime also started to include on its app Wheels-branded electric bikes in certain cities. Ting said, at the time, that users should expect more partnerships like these.

The expansion into mopeds is the latest sign that Lime has managed to put some of its darker Covid-19-tainted times behind it. Lime underwent a round of layoffs in April, taking on capital from Uber the next month in a down-round that brought its valuation under the $1 billion mark. Lime paused most of its operations for a month during the early COVID-19 days.

But it has since rebounded. Ting said in November that the company is both operating cash flow positive and free cash flow positive in the third quarter and was on pace to be full-year profitable, excluding certain costs (EBIT), in 2021. It also had enough cash — or access to it — to expand into mopeds.

The question is, ‘whether more modes are on the way?’

Arroyo didn’t give specifics, but it does appear more is coming.

“I think throughout this year you’re gonna see us really expand, not just with modes, but optionality,” Arroyo said. ” For us it’s really about having a platform that’s available for all these trips, and then we want to be able to provide optionality that makes sense for the riders. Shared is a huge component, but there’s a lot of different levels of what shared looks like; and throughout 2021, I think you’re gonna see us offer quite a few different options as our modes expand.”