Kurds, Turkey and the U.S.: 5 Years of Tension, Alliances and Conflict 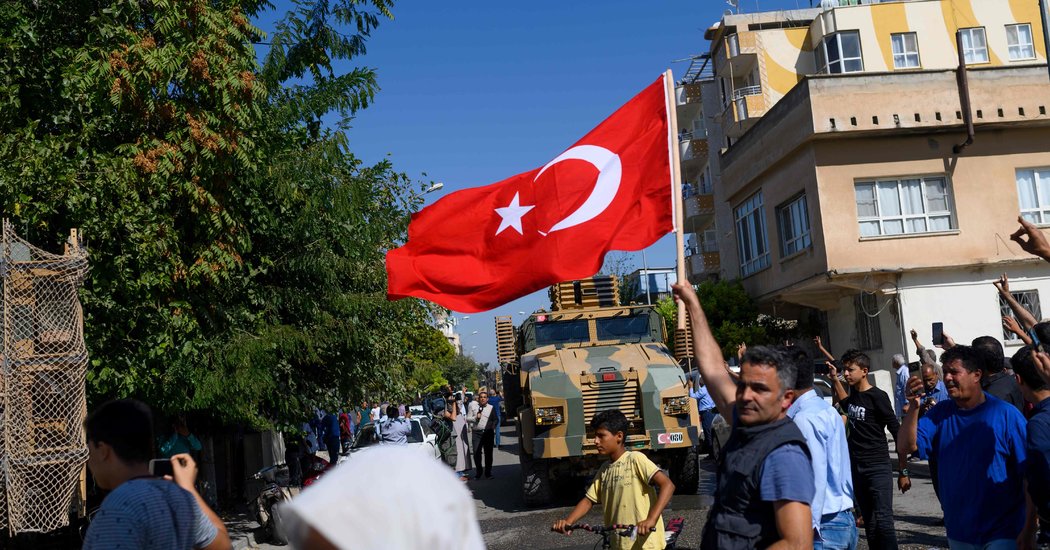 Turkey’s military strike on Wednesday against Kurdish fighters in northern Syria — a group long regarded as the United States’ most reliable Syrian partner in its fight against the Islamic State — has been years in the making.

To Turkey, an important American ally and NATO member, those fighters are terrorists bent on undermining the Turkish government. But for the United States, they have been dependable allies who have died fighting alongside American soldiers.

Since 2014, with the start of military action against ISIS, Kurdish fighters have done the critical work of clearing and holding territory conquered by the militants. In recent years, they have taken care of refugees and detained terrorism suspects.

A murdered minority and the start of an alliance

In August 2014, the Islamic State launched surprise attacks in Kurdish-held areas of Iraq, forcing the Iraqi Kurdish militia known as the Peshmerga to retreat.

A number of towns fell to the Islamic State, including Sinjar, home to the Yazidi religious minority. Islamic State militants killed thousands of Yazidis, many of whom had been stranded after fleeing to the top of a mountain. Many others, including children, were captured and forced into sexual slavery.

In response, President Barack Obama ordered airstrikes in Iraq. The Syrian Kurdish militia known as the People’s Protection Units, known as the Y.P.G., also came to the aid of the Peshmerga. The militia has ties to a violent separatist movement inside Turkey known as the Kurdistan Workers’ Party, or P.K.K.

With the Kurds, the United States found a partner in its new fight against the Islamic State. The ethnic minority, who allowed women to fight on the front lines and promoted a moderate political ideology, were celebrated as loyal and fearless fighters.

Beginning in 2012, as the Syrian civil war raged, the Kurdish militia took control of Kobani, a Syrian city near the Turkish border. Thousands of Syrian refugees sought shelter there.

In September 2014, Islamic State militants attacked the town, prompting 200,000 people to flee across the Turkish border. Despite the humanitarian crisis, Turkey did not allow Kurdish refugees to cross with vehicles or livestock. It also did not attack Islamic State positions, even though they were within miles of its border, or allow Turkish Kurds to cross into Syria to help defend Kobane.

Retaking a stronghold on the Turkish border

The Kurds were assisted by American airstrikes and ground troops as well as a coalition of Arab and Kurdish militias, known as the Syrian Democratic Forces, that was fighting the Syrian government. After weeks of fighting, the Kurds drove ISIS away from the Turkish border, establishing a significantly larger stronghold on Turkey’s doorstep, further angering the Turks.

Turkey strikes two enemies at once

Turkey sent tanks, warplanes and special operations forces into northern Syria to take control of the Islamic State stronghold of Jarabulus. At the time, it was Turkey’s most significant foray into Syria.

As much as the incursion was about pushing Islamic State militants out of their border stronghold, the invasion was also meant to roll back advances by Syrian Kurdish militias.

The fall of an ISIS capital

Much of Raqqa, the Islamic State’s de facto capital in Syria, was devastated in an attack that included an assault by the Syrian Defense Forces and American-led airstrikes that killed more than 1,000 civilians.

About 270,000 residents were displaced by the fighting.

A Turkish air assault on the Kurds

For weeks, Turkish warplanes bombed the Kurdish enclave of Afrin in northern Syria, killing hundreds of civilians and more than 1,000 Kurdish militia fighters. At least 137,000 people were displaced.

The Afrin battle foreshadowed this week’s attacks. President Recep Tayyip Erdogan of Turkey pressed ahead with the offensive despite warnings from the United States that it would further destabilize war-torn Syria.

“Beginning from the west, step by step, we will annihilate the terror corridor up to the Iraqi border,” Mr. Erdogan said at the time, using a phrase he would later reiterate to justify this week’s cross-border attacks.

Trump: ‘They’re great people and we have not forgotten’

Some of President Trump’s allies in Congress criticized what they say was a shift in American policy that betrayed the Kurds. Last year, speaking to reporters in New York, Mr. Trump suggested that the United States would not allow Turkey to unilaterally attack Kurdish militants in Syria.

“Great fighters. I like them a lot,” Mr. Trump said of the Kurds in September 2018. “We are trying to help them a lot. Don’t forget that’s their territory. They fought with us, they died with us, we lost tens of thousands of Kurds fighting ISIS. They’re great people and we have not forgotten.”

President Recep Tayyip Erdogan threatened to attack the Syrian Kurds almost a year ago, but was stopped by the United States at the last minute. This time around, President Trump saw less reason to prevent an onslaught.

The Turkish president has not minced words about what his objective is: an “incursion that eliminates both P.K.K.-Y.P.D. elements and remnants of Daesh,” Mr. Erdogan said, using an Arabic acronym for the Islamic State. “This should be known.”

The alliance between the Kurds and the United States had its greatest victory in March in Baghuz, Syria, when Kurdish fighters backed by American bombers destroyed the last major ISIS holdout.

The success of that rout helped Mr. Trump justify allowing the Turkish military to attack the Kurds. He said this week that there was nothing in Syria but sand, and that the territory was no longer worth protecting.

On Wednesday, he said the Kurds were not deserving of American support because they were fighting only to defend their own land and had not served alongside American soldiers at the Battle of Normandy Beach in France during World War II.