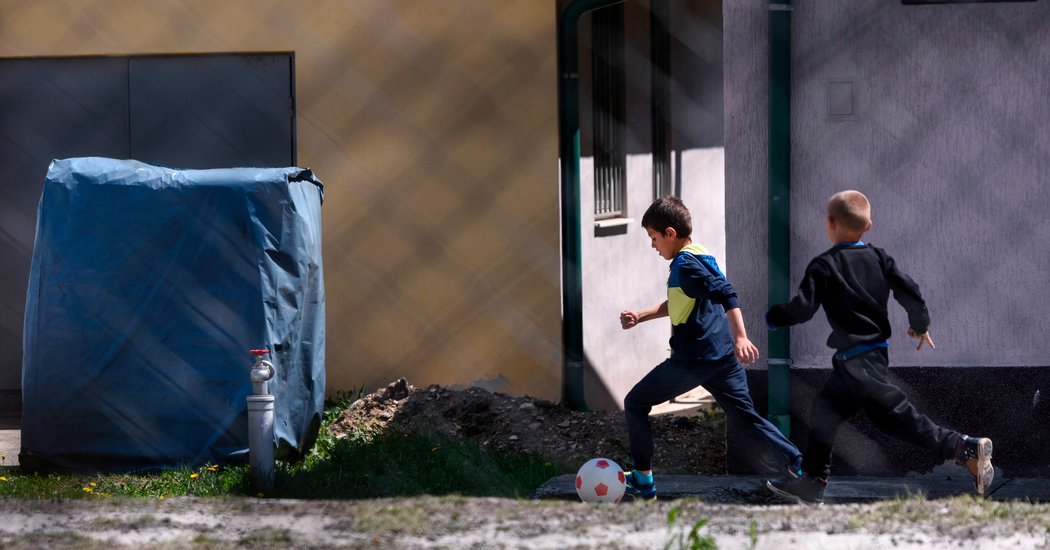 PRISTINA, Kosovo — The authorities in Kosovo said on Saturday that more than 100 of their citizens, mostly women and children who were relatives of jihadists, had been flown home from Syria under heavy security with the assistance of the United States.

Justice Minister Abelard Tahiri told journalists that “a planned operation to bring back some of our citizens from Syria ended successfully.” Officials said four men suspected of having been fighters with the Islamic State militant group, 32 women and 74 children were among the group. The four suspected fighters were arrested.

Nine of the children had lost parents during the fighting in Syria. Other details were not immediately released, officials said, because of “the sensitivity of the case.”

Two buses holding the women and children stood for hours at the Kosovo airport before being transported under police escort to army barracks just outside Pristina, the capital. The group was taken to a center in Vranidoll, north of the city, before being sent to homes in the next 72 hours, officials said.

Mr. Tahiri said that a task force had been created in October in close cooperation with the United States.

“Our message is clear,” he said. “The Kosovo government will strongly continue to prevent and fight violent extremism and terrorism.”

The minister said he considered the women and children to be “innocent victims,” adding that the authorities had plans to rehabilitate and reintegrate them into society.

More than 400 Kosovars were known to have joined extremist groups in Syria and Iraq since 2012, according to the Kosovo authorities. About 70 men who fought alongside extremist militant groups have been killed, according to Reuters.

A top police official, Rashit Qalaj, said that 30 Kosovo citizens were still actively supporting the extremist groups in the region. The police said that about 150 women and children, including 60 children born in war zones, had been captured since the Islamic State group lost ground.

It remained unclear if all of them had been returned on Friday.

“We shall not allow our citizens to turn into a threat to the Western world,” Mr. Tahiri said, adding that Kosovo would take all steps required “to ensure that those accountable face the law,” and that “there is no amnesty for any person, be it a woman or a man, who has committed an extremist or terror act.”

International and local security agencies have previously warned of the risk posed by returning fighters. In 2015, Kosovo adopted a law making fighting in foreign conflicts punishable by up to 15 years in jail, Reuters said.

Kosovo’s population is nominally 90 percent Muslim, but largely secular in outlook. There have been no Islamist attacks on its soil, according to Reuters, although more than 100 men have been jailed or indicted on charges of fighting in Syria and Iraq. Some of them were found guilty of planning attacks in Kosovo.

The government said that a form of radical Islam had been imported to Kosovo by nongovernmental organizations from the Middle East after its war of secession from Serbia in the late 1990s.