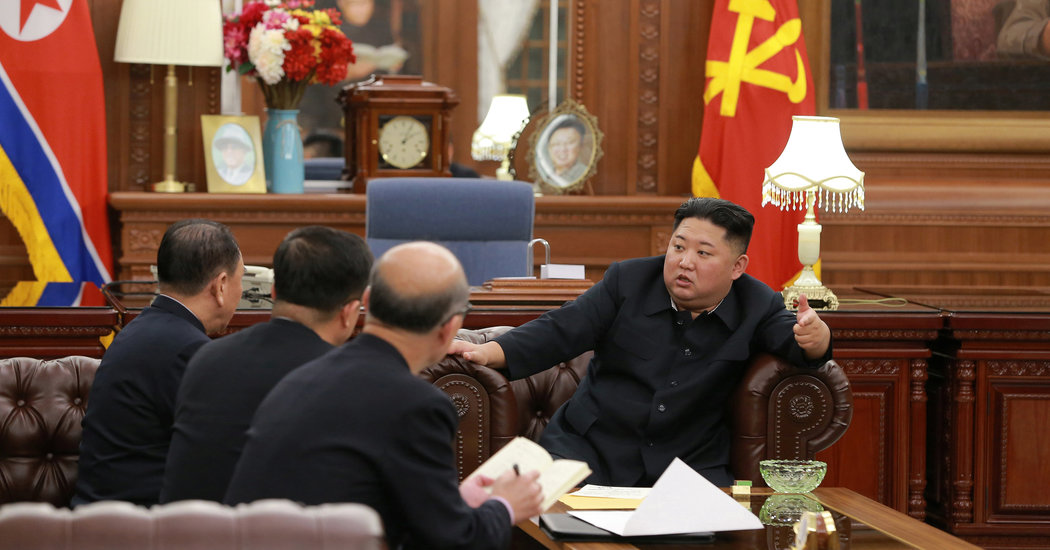 SEOUL, South Korea — North Korea’s leader, Kim Jong-un, praised President Trump’s “unusual determination and will” to settle their nuclear arms dispute through a second summit meeting, saying that he would move “step by step” to achieve his goals in negotiations with the Americans, the North’s official news media reported on Thursday.

Mr. Kim made the remarks during a briefing with North Korea’s senior envoy and nuclear negotiator, Kim Yong-chol, who visited Mr. Trump at the White House last week. At that 90-minute meeting in the Oval Office, the envoy delivered a personal letter from Mr. Kim to Mr. Trump, and afterward the White House announced that the two leaders planned to hold their second summit meeting, in late February.

The envoy returned home with a letter from the American leader, and on Thursday the North’s official Korean Central News Agency reported that, after receiving “the good personal letter sent by President Trump,” Mr. Kim expressed “great satisfaction.”

“He spoke highly of President Trump for expressing his unusual determination and will for the settlement of the issue,” it added.

Mr. Kim said North Korea would “believe in the positive way of thinking of President Trump, wait with patience and in good faith and, together with the U.S., advance step by step toward the goal,” the news agency said.

He also expressed satisfaction with his envoy’s trip to Washington, setting forth “tasks and orientation for making good technical preparations” for his second meeting with Mr. Trump, it said.

Neither North Korea nor the United States has announced the date or venue for the summit meeting, though Vietnam appears to be the leading contender to host it.

Mr. Kim’s upbeat, if cautious, tone on Thursday suggested that both sides have recently narrowed their differences enough to discuss the details of a second summit meeting. But it also indicated that North Korea was not ready to make significant efforts to dismantle its nuclear arsenal without getting reciprocal concessions from Washington.

When Mr. Trump and Mr. Kim met for the first time in June in Singapore, they agreed to work toward the complete denuclearization of North Korea, a permanent peace agreement for the Korean Peninsula and “new” relations between their countries. But talks have since stalled over how to implement the vaguely worded agreement, the product of a meeting that some of Mr. Trump’s critics disparaged as full of pomp but light on substance.

The Trump administration has hoped to breathe new life into negotiations through a second summit meeting, in which Mr. Trump would try to persuade Mr. Kim to commit to a road map for giving up his nuclear arsenal and production facilities — and to take concrete first steps along that path. Such first steps are said to include a freeze on the North’s nuclear and missile programs and a full declaration of the details of those programs for future verification.

But North Korea has said that it won’t take such steps without corresponding measures from the United States, such as the easing of sanctions.

After the North Korean envoy’s trip, the White House again said that sanctions would remain in force until North Korea’s final, fully verifiable denuclearization. But analysts doubted that North Korea would make any meaningful concessions without relief from sanctions.

Analysts in South Korea fear that Mr. Trump, eager for a diplomatic achievement, might settle for another deal: a freeze on the North’s intercontinental ballistic missile program, removing the most immediate threat to the American homeland, in return for significantly reducing the United States’ military capabilities around Korea, including its 28,500 troops in the South. Mr. Trump has repeatedly complained about the cost of maintaining a military alliance with South Korea and Japan.

Such fears have spread in recent weeks in South Korea as talks between Washington and Seoul stalled over how to share the cost of maintaining American military bases on the peninsula. Washington has insisted on an increase of up to 50 percent from the $851 million South Korea paid last year, a demand that Seoul has balked at.