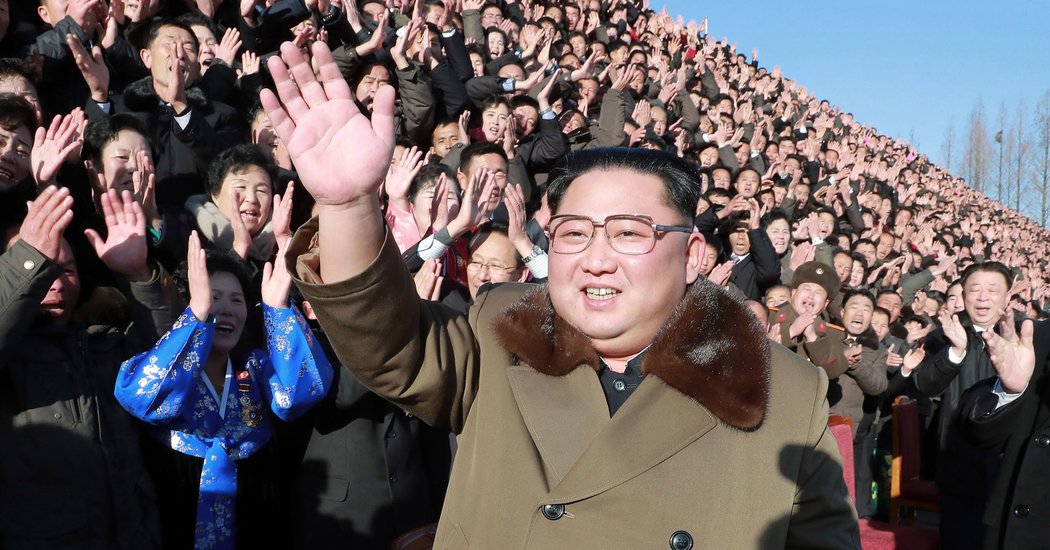 The visit offers Mr. Kim and Mr. Xi an opportunity to coordinate strategy face to face should Mr. Kim have a second summit meeting with President Trump.

Xinhua, the official Chinese news agency, confirmed Mr. Kim’s visit after a flurry of reports from South Korean media that a train appearing to be carrying a senior North Korean official had passed through Dandong, a Chinese city on the border with North Korea. The train was expected to pull into Beijing on Tuesday morning, the South Korean news agency Yonhap reported, citing an anonymous source.

North Korea’s state-run Central Television also confirmed the visit, reporting that Mr. Kim started the four-day visit on Monday at Mr. Xi’s invitation. It said he was accompanied by his wife, Ri Sol-ju, and senior officials, including Kim Yong-chol, Mr. Kim’s right-hand man in diplomatic negotiations with the United States and South Korea.

The visit by Mr. Kim suggests that he is seeking Mr. Xi’s advice or highlighting his country’s alliance with China as he prepares for another meeting with Mr. Trump. The brief report by Xinhua gave no details of who Mr. Kim will meet in China. But his visit, scheduled to end Thursday, will allow plenty of time to consult with Mr. Xi and other senior Chinese leaders.

Mr. Kim visited China three times last year to meet with Mr. Xi before and after his first meeting with Mr. Trump, in Singapore last June.

His latest visit may also provide Mr. Xi with an opportunity to accentuate his country’s leverage over North Korea as China and the United States try to head off a trade war.

In Singapore, Mr. Kim and Mr. Trump agreed to work toward “complete denuclearization of the Korean Peninsula” and “new” relations between their countries, which have been adversaries for nearly seven decades.

But subsequent talks have since stalled, and a vast gap has emerged over what it would take to achieve “complete denuclearization” of the peninsula.

The United States has demanded that North Korea start taking crucial steps toward denuclearization, like declaring how many nuclear weapons it has and other details of its weapons program, for future inspections. North Korea insists that Washington first build trust by lifting the sanctions imposed on that country.

In a New Year’s Day speech, Mr. Kim said he was ready to meet with Mr. Trump anytime, but he warned that if Washington persisted with sanctions, his country might be compelled to “find a new way for defending” its sovereignty and interests.

Last week, Mr. Trump said he had recently received a “great letter” from Mr. Kim, but declined to reveal its contents. On Sunday, he said negotiations were underway on the location of the next meeting with Mr. Kim.

“With North Korea, we have a very good dialogue,” he told reporters before boarding a helicopter for the presidential retreat at Camp David, Md., where he said he would be discussing a trade deal with China.

Mr. Trump said the sanctions against North Korea remained “in full force and effect” and would not be relaxed until the United States saw “very positive” results.

Mr. Kim arrived in China on the same day Chinese and America officials began two days of talks in Beijing, seeking to ease trade tensions after the Trump administration raised tariffs on Chinese goods and demanded that Mr. Xi lower barriers on American goods and businesses.

“The Chinese have been very clear to us that these are separate issues,” Mr. Pompeo told CNBC on Monday. “Their behavior has demonstrated that as well, and we appreciate that. China has actually been a good partner in our effort to reduce the risk to the world from North Korea’s nuclear capability. I expect they will continue to do so.”

Chinese cooperation remains crucial to American-led international efforts to keep the pressure on North Korea with sanctions, because a vast majority of the North’s external trade is conducted with China. But both Chinese and Russian diplomats have called on Washington to consider easing sanctions as an inducement for North Korea to move faster toward denuclearization.