Karl Marx’s Tomb in London Is Splashed With Red Paint 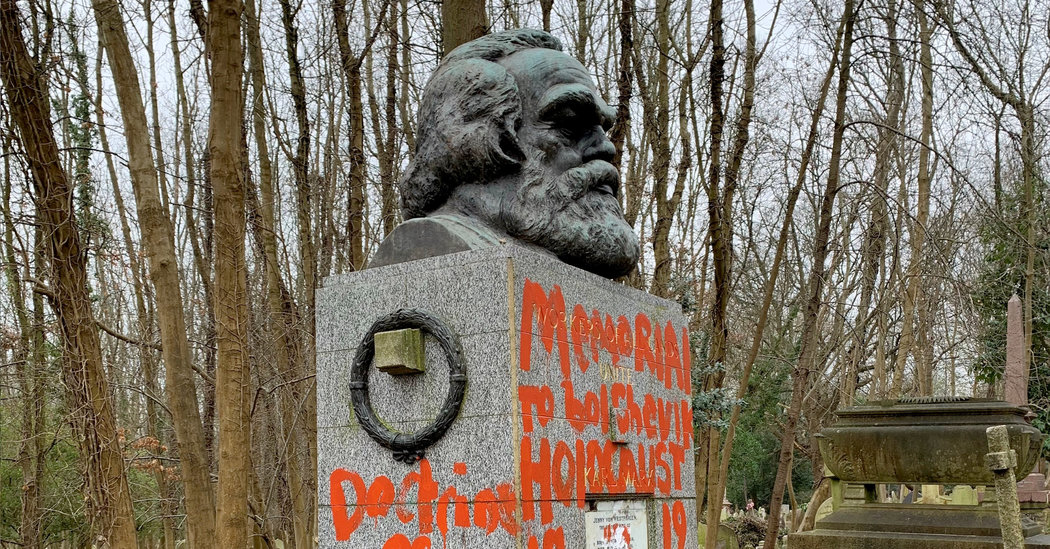 LONDON — A memorial to Karl Marx at a cemetery in North London has been defaced for the second time in less than two weeks.

This time, vandals splashed the monument to the 19th-century political philosopher in Highgate Cemetery — which is listed among British structures with exceptional historical interest — with bright red paint.

Photographs posted on Twitter by the cemetery on Saturday showed the marble gravestone daubed with political slogans such as “doctrine of hate” and “architect of genocide.”

The cemetery said the marble tablet was also “smashed up.”

“Senseless. Stupid. Ignorant,” it added of the vandalism. “Whatever you think about Marx’s legacy, this is not the way to make the point.”

A plaque within the gravestone, bearing epitaphs to Marx, his wife and his grandson, was also daubed with the red paint.

This month, someone took a hammer to the monument and tried to scrape and chip Marx’s name off the marble slab — an attack that Ian Dungavell, the chief executive of the Friends of Highgate Cemetery Trust, described as “very upsetting,” according to the British newspaper The Guardian.

“This is no way to treat our heritage,” the cemetery said. “We will repair as far as possible.”

The Metropolitan Police said they had made no arrests in either case.

A revolutionary socialist, author of “Das Kapital” and co-author of the “Communist Manifesto,” Marx was born in Trier, Germany, on May 5, 1818, and later lived in Berlin, Paris and London. He resided in the British capital from 1849 until his death in 1883.

His memorial has been attacked in the past with paint, and in 1970 someone attempted to blow it up with a bomb.

The attack was the latest on memorials of historic interest in London in the past month. Vandals splashed paint on a statue of Prime Minister Winston Churchill and on a sculpture commemorating the Royal Air Force’s Bomber Command in Green Park.