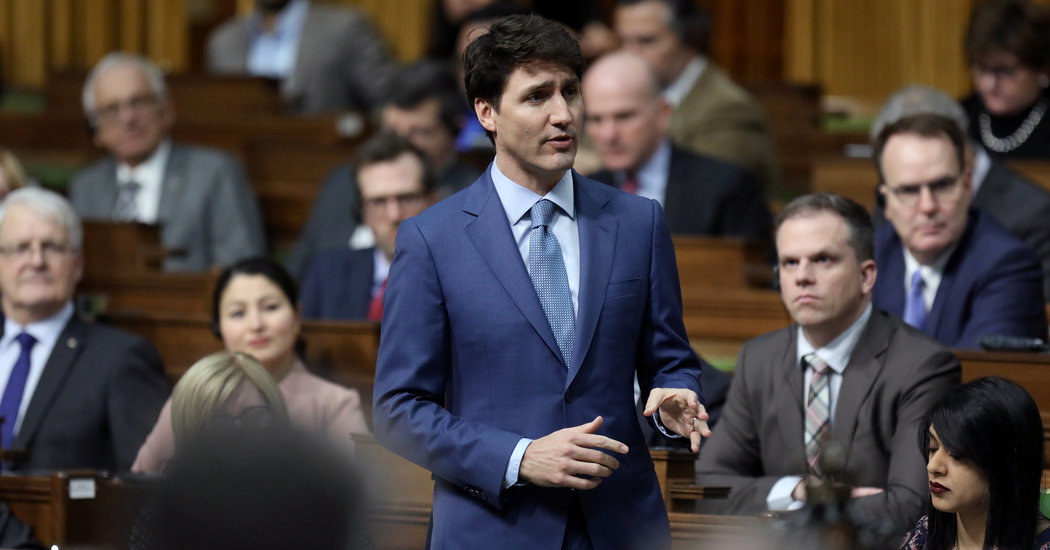 OTTAWA — Prime Minister Justin Trudeau of Canada on Thursday spoke directly about the political controversy that has consumed the country for the past month, saying that there had been a breakdown in trust and communication but that he had not done anything wrong.

Bluntly asked by a reporter in the packed national press gallery in Ottawa if he was apologizing, he offered an indirect denial.

“In regards to standing up for jobs and defending the integrity of law, I continue to say that there was no inappropriate pressure,” he said.

In the brewing political crisis, the prime minister and his staff have been depicted as inappropriately and repeatedly pressuring his justice minister and attorney general, Jody Wilson-Raybould, to settle a corporate criminal case to protect Canadian jobs.

The prime minister’s popularity has sunk, calls for his resignation are echoing, two powerful female ministers — one of them Ms. Wilson-Raybould — have resigned in protest, and his top political adviser, who is a close friend, has stepped aside in the mess.

“I was not aware of that erosion of trust, and as prime minister and head of cabinet, I should have been,” Mr. Trudeau said. “Ultimately, I believe our government will be stronger for having wrestled with these issues.”

By maintaining that no one had done anything wrong, Mr. Trudeau was limited in what he could offer in his remarks, said Andrew McDougall, a lecturer in political science at the University of Toronto.

“He did express regret about the breakdown of the relationship,” Mr. McDougall said. “Whether that was enough is another question.”

“We’re at the point in this story where both sides have shared their views, so he was trying to just get it behind him,” he added. “Unless there’s more to come, it’s up to Canadians to decide who is telling the truth.”

Although in some ways the accusations seem mild — no money changed hands and no laws appear to have been broken — the political wreckage from the perception of back-room dealing by the Trudeau government has been huge.

[How Justin Trudeau Was Ensnared by Scandal]

On Thursday, seven months before a national election, Mr. Trudeau tried to convince the country that he was still a feminist, and still committed to righting the country’s wrongs against Indigenous people and to conducting politics in an open, transparent way.

He pointed out that after his remarks, he was heading straight to the Arctic to apologize to Inuit people for historic wrongs and would be celebrating International Women’s Day in Toronto.

He said he looked forward to defending his government’s record during the election campaign in the fall.

Unlike leaders in other nations, Canadian prime ministers rarely make major speeches outside the House of Commons except during campaigns. The fact that he felt compelled to make such an address underscored the political perils he faces.

In his remarks, Mr. Trudeau conjured the memory of his father, the former prime minister and justice minister Pierre Trudeau, saying his example had instilled a deep respect for justice in him.

Last week marked the 35th anniversary of Pierre Trudeau’s “walk in the snow” that prompted him to resign as prime minister. On Thursday, his son walked through Ottawa’s snowy streets before television cameras to deliver a very different message at the press gallery.

At the center of the controversy is the giant Canadian engineering and construction company SNC-Lavalin, which in 2015 was charged with bribing Libyan officials during the dictatorship of Col. Muammar el-Qaddafi and defrauding the Libyan government.

Mr. Trudeau and his top aides were accused of trying to get Ms. Wilson-Raybould to allow the company to avoid a conviction — which would bar it from government contracts for a decade — and instead negotiate a monetary penalty.

The prime minister’s first reaction was to dismiss the accusations and charge forward, hoping they would shrink in the headlines. Instead, they grew.

He also seemed to criticize Ms. Wilson-Raybould for not raising her concerns with him about impropriety late last year, when the debate about how to handle the case was underway.

Those remarks only made matters worse.

Last week, Ms. Wilson-Raybould offered provocative testimony to a House of Commons justice committee. She described months of being hounded by members of the prime minister’s team, long after she told them her mind was made up to pursue a criminal conviction.

She called their behavior inappropriate and described “veiled threats.”

On Wednesday, Gerald Butts, the prime minister’s former chief political adviser and best friend, appeared before the justice committee, and said that Ms. Wilson-Raybould was asked to get an outside opinion about using the monetary penalty because of the potential job loss if the company lost business.

“When 9,000 people’s jobs are at stake, it is a public policy problem of the highest order,” Mr. Butts said. “It was our obligation to exhaustively consider options the law allows.”

Mr. Trudeau said on Thursday that Ms. Wilson-Raybould told him during a five-minute meeting on Sept. 17 that she had decided against a settlement. But he said she agreed to reconsider the matter.

According to Mr. Trudeau, Ms. Wilson-Raybould never reported the result of that reconsideration, nor did she ever express her concerns that the case continued to be raised with her and her staff.

He acknowledged that he should have personally followed up with Ms. Wilson-Raybould but rejected the idea that the subject should have been taken off the table.

“For me and my team to continue talking about such an important issue — well, that’s part of my job,” Mr. Trudeau said.

He added, “As we look back over the past weeks, there are many lessons to be learned and many things we would have liked to have done differently.”