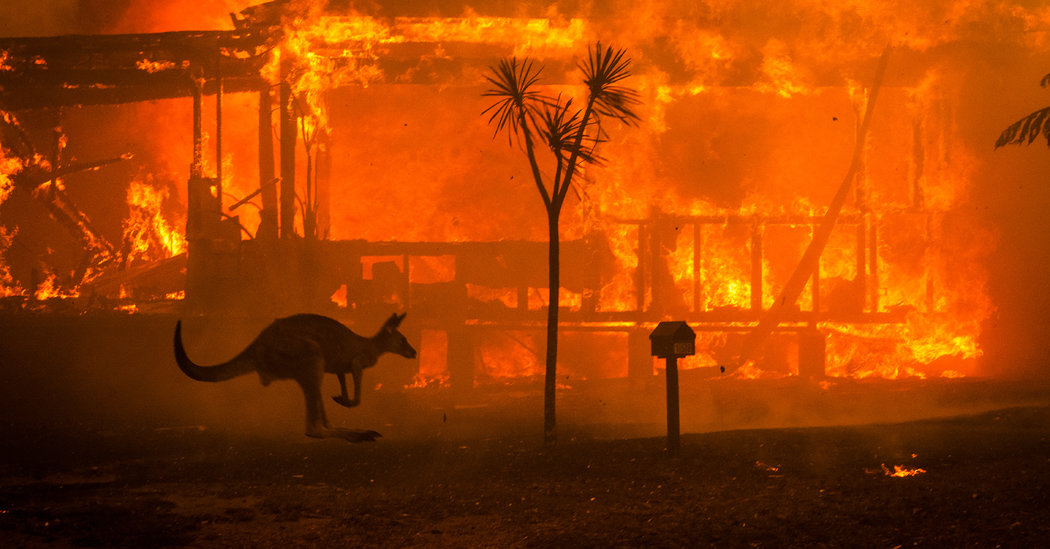 HASTINGS, Australia — The evacuees walked down the gangway of the giant naval vessel to the dock, each carrying just a few items of luggage. Some held infants and others their dogs, whose legs were still shaky from the 20-hour voyage down the coast of Australia. They were weary, and their clothes smelled of smoke, but the terrible infernos were finally behind them.

Four days after a bush fire ravaged the remote coastal town of Mallacoota, forcing people to shelter on the beach under blood-red skies, more than 1,000 stranded residents and vacationers arrived on Saturday in Hastings, a town near Melbourne.

The authorities said it was most likely the largest peacetime maritime rescue operation in Australia’s history. It was also a symbol of a country in perpetual flight from danger during a catastrophic fire season — and the challenge the government faces in getting the blazes under control.

Searing heat and afternoon winds propelled fires over large swaths of Australia on Saturday, adding to the devastation of a deadly fire season that has now claimed 23 lives. Thousands of people have been evacuated, while many towns and cities under threat were still smoldering from ferocious blazes that ripped through the countryside earlier in the week.

More than 12 million acres have burned so far, an area larger than Switzerland, and the damage is expected to only get worse in the extremely arid conditions that are allowing the fires to spread. The fires are also so hot and so large that they are creating their own weather patterns, which can worsen the conditions.

With more than a month still to go in the fire season, the government announced on Saturday a large-scale use of military assets, a deployment not seen since World War II, experts say. About 3,000 army reservists, along with aircraft and naval ships, are being made available to help with the evacuation and firefighting efforts.

“The government has not taken this decision lightly,” said Defense Minister Linda Reynolds. “It is the first time that reserves have been called out in this way in living memory.”

In anticipation of the bad conditions on Saturday, thousands of people were evacuated, largely from communities along the southeastern coast, where the towns swell with tourists during the summer. Prime Minister Scott Morrison announced that a third Australian Navy ship, the Adelaide, would be used to evacuate people.

Mr. Morrison, who has been widely criticized for his response to the fires, had resisted a major intervention by the national government, saying firefighting has traditionally been the domain of the individual states. He has also minimized the link between global warming and the extreme conditions that have fueled the fires.

The states and their overwhelmingly volunteer force of fire fighters in rural areas have been stretched and depleted by a season that started earlier and has been especially ferocious. While Australia has long dealt with bushfires, a yearslong drought and record-breaking temperatures have made for a more volatile and unpredictable season.

The Bureau of Meteorology reported that the western Sydney suburb of Penrith, which reached a high of 48.9 degrees Celsius, or 120 degrees Fahrenheit, was the hottest place in the country on Saturday. Last month Australia recorded its warmest day across the continent.

As climate change worsens, scientists are predicting that the fires will become more frequent and more intense.

John Blaxland, a professor at the Strategic and Defense Studies Centre at the Australian National University, said the country had not seen a seen a catastrophe on this scale, affecting so many people in so many different locations since Australia became independent in 1901.

With other obligations in the Pacific and South East Asia, the military was not necessarily staffed to handle a looming climate crisis, he said. “If this is the new normal, then that model is broken,” he said.

Officials on Saturday said one major fire had crossed from the state of Victoria north into New South Wales and was spreading quickly. Fire-generated thunderstorms have appeared over blazes in two different places. Emergency workers were using cranes and air tankers to fight the fires, as winds moving up the coast were causing some of the blazes to merge.

The fires are blazing ferociously along Australia’s eastern coast, as well as South Australia, Tasmania and parts of Western Australia.

In southern Australia, fire tore through a popular nature reserve known for its koala bears, sea lions and other wildlife, killing a man and his grown son.

In towns along the southwest coast between Melbourne and Sydney shops closed, power was cut and the authorities went door to door ordering evacuations.

In Nowra, a coastal town two hours south of Sydney, the sky went dark, the air filled with choking smoke.

At a lawn-bowling club transformed into an evacuation center, people strapped on gas masks, while dogs barked frantically. A chaplain ministered to the anxious.

“There’s nowhere safe,” said Liddy Lant, a hospital cleaner still in her uniform who had fled from her home on Saturday. “I could seriously just sit down and cry.”

The Fire Commissioner of the Rural Fire Service in New South Wales, Shane Fitzsimmons, told reporters on Saturday that more than 148 active fires were burning in his state alone, with 12 at an emergency level. Further south, in Victoria, the authorities counted more than 50 active fires.

“This is not a bushfire,” Andrew Constance, the transport minister in New South Wales, told ABC radio. “It’s an atomic bomb.”

And a great many of those species, like the koala, the southern brown bandicoot and the long-footed potoroo, have populations living in the regions now being obliterated by the fires. Because the fires this season have been so intense and consumed wetlands as well as dry eucalyptus forests, there are few places many of these animals can seek refuge.

“We’ve never seen fires like this, not to this extent, not all at once, and the reservoir of animals that could come and repopulate the areas, they may not be there,” said Jim Radford, a research fellow at La Trobe University in Melbourne.

At the evacuation center in Nowra, about a hundred people sought cover throughout the day. Children chased each other around as paramedics strapped oxygen masks onto elderly residents.

Ms. Lant, 71, said she received an emergency alert on Saturday afternoon telling her to evacuate immediately from North Nowra. She ran home to fetch her dog Kaiser and her bird. Her cat had fled. Firefighters were knocking on doors telling her neighbors to leave. Her brother is in Mallacoota, the town where residents are being evacuated by the navy.

At the next table, the Barwick family and their two dogs were waiting as they had for days. Although their home in Worrigee was not in the direct line of fire, they had arrived here on Tuesday night, having lived through a bushfire in 2017.

Their two children had been traumatized by that experience. Back then, they had to flee the approaching flames, spending hours on the beach.

“I don’t need them seeing the plumes again,” said Daniel Barwick. “I’m just trying to protect them as much as possible.”

As people disembarked the naval ships in Hastings on Saturday, emergency service workers offered emotional support and premade sandwiches. Buses then took them either to Melbourne or a relief center in the nearby town of Somerville, where many would be picked up by friends and relatives.

The arrivals said they were thankful to be safely ashore. A man who had stepped off a bus in Somerville embraced a woman who had come to meet him, and sobbed.

What Darcy Brown, 16, craved most was a shower. Ms. Brown had just moved with her family to Mallacoota when the fire razed their new home and worsened her asthma. It was “devastating,” she said.

Others said their personal brush with climate disaster had crystallized their view that the government needed to do more not just to reduce heat-trapping emissions, but also to help the country adapt to a warmer world.

One woman disembarking the boat, Corrin Mueller, 23, carried a sign that read “inaction costs more” which she described as referring to the Australian government’s failure to reduce emissions.

“We’re only here because nobody’s acted quick enough,” she said. “And there’s so much more we can still do to stop more people having to go through this.”