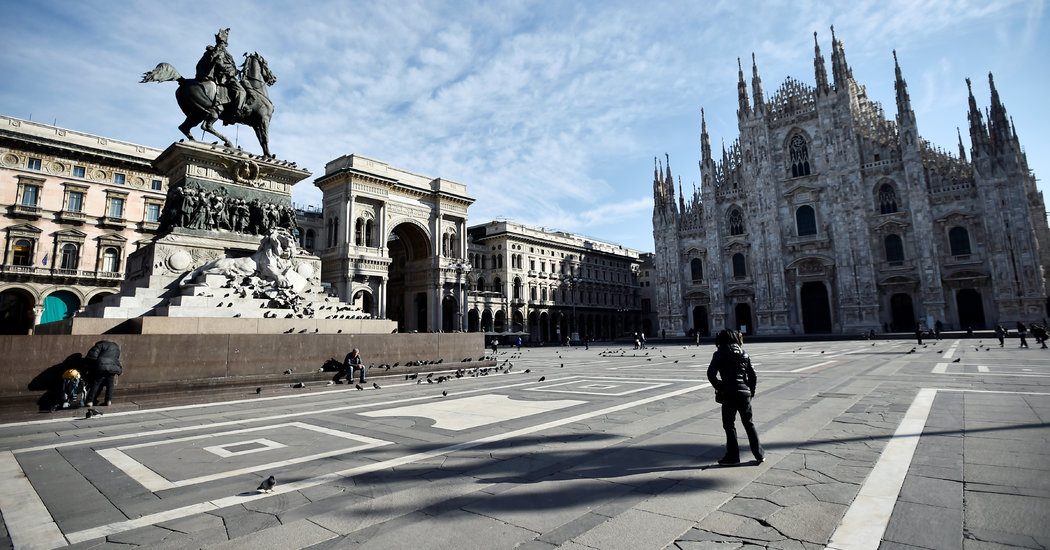 ROME — Italy’s government early Sunday took the extraordinary step of locking down much of the country’s north, restricting movement for about a quarter of the Italian population in regions that serve as the country’s economic engine.

The move represents the most sweeping effort outside China to stop the spread of the coronavirus, and is tantamount to sacrificing the Italian economy in the short term to save it from the ravages of the virus in the long term.

By taking such tough measures, Italy, which is suffering the worst outbreak in Europe, sent a signal that restrictive clampdowns at odds with some of the core values of Western democracies may be necessary to contain and defeat the virus.

“We are facing an emergency,” Prime Minister Giuseppe Conte said in announcing the government decree in a news conference after 2 a.m. “A national emergency.”

He called the measures “very rigorous” but necessary to contain the contagion and ease the burden on Italy’s strained health care system. He said there would now be an “obligation” to avoid any movement “in and out of the territory, and also within” the locked-down areas. Any such travel will require special permission for health or work reasons.

“This is the moment of self-responsibility,” he said.

Questions immediately emerged about exactly how the new rules would be enforced, especially as local leaders in the north complained that they had been given little notice or say in the decision making.

More generally, the wobbly Italian government, which has had difficulty passing basic laws, was attempting a crackdown of historic scope in a continent fiercely protective of its personal liberties and in a country with a tendency to interpret laws as suggestions or hurdles to circumvent.

The coronavirus has already inflicted serious damage in Italy, one of the Continent’s most fragile economies. It has led to the closing of all of the country’s schools and, by Saturday, it had infected the leader of one of the two parties in the governing coalition.

The measures will turn stretches of Italy’s wealthy north — including the economic and cultural capital of Milan and landmark tourist destinations such as Venice — into quarantined enclaves. Mr. Conte did not say how long the restrictions would last, but an earlier draft weighed by the government on Saturday night said the decree would be in force until at least April 3. The travel bans will prevent the free movement of roughly 16 million people.

By Saturday, Italy had more than 5,800 cases of the virus, 233 of them fatal, with increases of almost 800 infections and 49 deaths from the day before. Only China has had more people die after contracting the virus.

As the government met late into the night on Saturday, ministers insisted that the proposals were merely a draft. Confusion spread about whether officials would actually block travel or only recommend against it.

As soon as the draft became public on Saturday evening, shocked regional and municipal leaders in the north argued that they were caught off-guard and that implementing the rules so suddenly would be impossible.

Mr. Conte also announced early Sunday morning that the government would extend less restrictive measures previously imposed in the north, such as the closings of museums, movie theaters, discos and betting parlors, to the rest of the country. He said conferences of doctors and other medical professionals would be “absolutely” banned. “We cannot allow it,” he said.

Critics of the government argued that the late-night meeting reflected a lack of coordination with regional officials and of insufficient communication with the Italian people, which had caused confusion amid the crisis.

Mr. Conte said that the national government’s regional partners had been consulted, and that the authorities would need to approve special travel permissions in or out of the designated areas for family or work emergencies. He said the police would stop travelers to check on their reasons for leaving the locked-down areas.

Funerals and cultural events are all banned under the measures. The decree requires that people keep a distance of at least one meter from one another at sporting events, bars, churches and supermarkets. People with fevers, even if they had not yet been tested for the virus, are strongly recommended against leaving their homes, Mr. Conte said. Those who have tested positive are barred from doing so.

Police officers and soldiers will be empowered to enforce containment measures. Churches may remain open, but Masses will be canceled.

The government decree essentially shuts down much of the northern region of Lombardy, Italy’s largest and most economically productive, which accounts for a fifth of Italy’s G.D.P.

Matteo Caroli, a professor of business management at Luiss Guido Carli University in Rome, said that if “the measures go beyond April, the situation will become systemic and the damage serious.”

Last week the government announced a huge support package of 7.5 billion euros, or about $8.5 billion, in addition to €900 million announced last week for families and businesses affected by the virus.

In the Navigli area of Milan, known for its bars and night life, people who were out drinking on Saturday night lamented “martial laws” while anxiously checking their phones for updates.

“We are enjoying our last moments of freedom,” said Lorenzo Cella, a 21-year-old computer programmer.

Some worried that they would lose their jobs or romantic partners outside Milan. Others were concerned that the entire economic engine of Italy would stall.

Leaked reports of the draft late Saturday night infuriated Mr. Conte, and prompted not only panic in Milan but also resistance and anger from mayors and regional presidents across the political spectrum in the northern areas.

Attilio Fontana, the president of the Lombardy region and a prominent figure in the opposition right-wing League party, said the plan included decisive steps toward containing the virus but was also a “mess,” according to the Italian news agency ANSA, because it created confusion about what citizens could and could not do.

Luca Zaia, another League leader and the president of the Veneto region, which includes Venice and other cities marked for lockdown, said that the government had notified him about the potential ban only “at the last minute.” Since the region was kept out of discussions to draft the order, he said, “it’s literally impossible” for the region to enact it so quickly.

The government order also locks down provinces in the Emilia Romagna region south of Lombardy. Stefano Bonaccini, the region’s liberal president, implored Mr. Conte and the country’s health minister, both nominal allies, for more time to come up with a more “coherent and shared” solution.

Mayors in some of the cities marked for quarantine expressed deep ire over first hearing about the proposed order on television.

“It’s incredible,” said Rasero Maurizio, the mayor of Asti in the northern region of Piedmont, who posted a video of himself livid in a white T-shirt from his home saying that he had just heard about the potential closing of his town on television. “No one told me.”

In addition to Asti, other towns and provinces including Modena, Parma, Piacenza, Reggio Emilia, Rimini, Pesaro and Urbino, Venice, Padua, Treviso and Alessandria — all in the north — were set to be locked down.

But there were clear signs that the virus was spreading southward.

Earlier on Saturday, it touched the top of Italian politics as the leader of the governing coalition’s Democratic Party said he was infected with the virus.

“Well, it’s arrived,” Nicola Zingaretti, the leader of the Democratic Party and the president of the region of Lazio, said in a Facebook video posted Saturday. “I also have the coronavirus.”

The infection of Mr. Zingaretti, who is based in Rome, provided vivid proof that the virus was no longer a matter of northern exposure, and that the entire country was now grappling with a public health emergency.

Mr. Zingaretti, the head of the country’s largest center-left party and one of the two parties leading Italy, has daily contact with top politicians in the capital as well as his party’s rank-and-file members.

Some members of Italy’s Parliament who come from the locked-down areas in the Lombardy region had already been quarantined. But the infection of a highly prominent figure like Mr. Zingaretti, who felt feverish on Saturday, raised the prospect that more Italian politicians had been exposed.

“Certainly a politician meets and hugs many people,” said Giovanni Rezza, director of the infective illness department at the National Health Institute. “There is a risk of diffusion.”

Elected officials privately expressed concern that the country’s Parliament, with many representatives from the north, could be a new theater of contagion.

The average age of those who have died in Italy after contracting the virus has been 81, and many had serious underlying conditions, according to health experts. Italy has one of the world’s most aged populations.

On Sunday morning, Mr. Conte urged Italians to obey the new rules in order to protect the “health of our grandparents.”

Some residents welcomed the decree.

“In China, they are more rigid,” said Miriam Ben Cheikh Amor, a 26-year-old waitress. “Maybe we need some of that too.”

Mr. Conte hoped that spirit would spread, and said that now was the time to band together and not to “try and be clever.”

“It will never work in Italy,” Paolo Imparato, a 26-year-old pizza maker, said Saturday night when asked about the potential new ban on movement. “People will run away, they will go around.”