Investors in Former Trump-Branded Hotel in Brazil Charged With Corruption 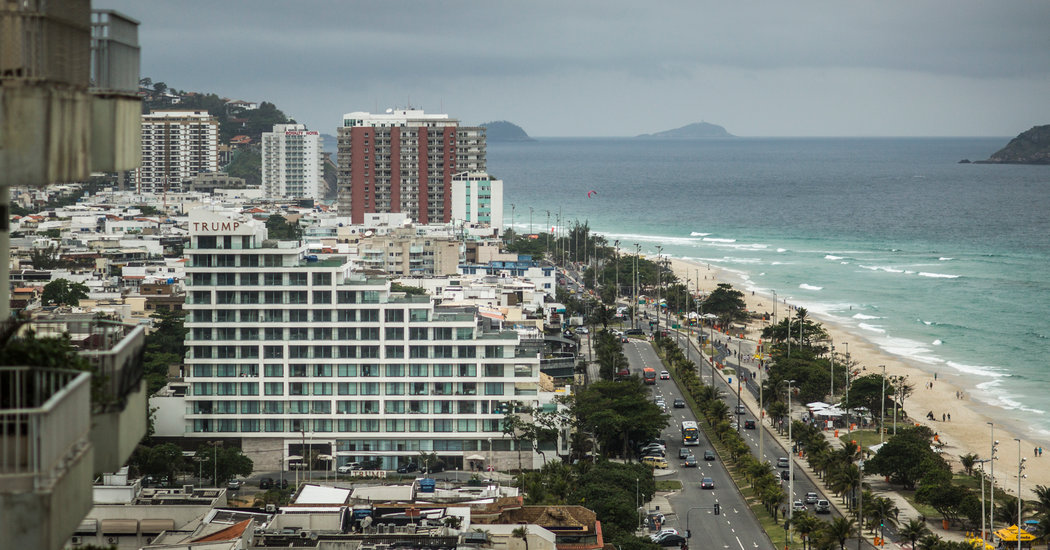 After work began on the Trump Hotel Rio de Janeiro, the businessman, Paulo Figueiredo Filho, boasted about his access to Donald J. Trump, who was then a candidate for president. Mr. Figueiredo, the grandson of the last military dictator in the authoritarian government that ran Brazil from 1964 to 1985, displayed a picture of himself with Mr. Trump at the Trump Tower in New York, both men flashing a thumbs-up sign.

“He’s one of the most recognized businessmen in the world, and if anything, we’re getting more exposure,” Mr. Figueiredo told The New York Times in an interview in 2015, in which he expressed admiration for Mr. Trump’s policy positions.

But at the end of 2016, the Trump Organization pulled out of the project, and the golden letters with the Trump name were removed from the seaside building.

And now, the Brazilian investors who backed the project are engulfed in a growing bribery scandal, and an international arrest warrant is expected to be issued for Mr. Figueiredo.

The federal police in Brazil this week arrested 13 entrepreneurs and bank executives charged with diverting public pension funds into two commercial projects, including the former Trump hotel, in exchange for bribes and illegal commissions. The other project was a sprawling office building in Brasília.

Investigators did not implicate the Trump Organization in the scheme.

Authorities in Brazil said they are going to ask Interpol to issue an alert seeking the arrest of Mr. Figueiredo, who is now living in the United States.

Trump Hotels withdrew from the project in December 2016, just weeks after federal prosecutors launched a criminal investigation into the funding scheme. Prosecutors in the capital, Brasília, began the probe in October 2016, after identifying large investments in the hotel made by two small public pension funds.

At the time, the Trump Organization said it had pulled out because of delays in completing the 13-story, 171-room luxury property. The hotel opened in August 2016, in time for the Olympic Games, but before several floors and facilities had been finished, including a 4,000-square-foot nightclub.

When the Trump Organization withdrew, the property’s name was changed to LSH Lifestyle and all the floors and other work were eventually completed. Mr. Figueiredo was one of three partners in LSH Barra. The other two have been arrested.

Mr. Figueiredo, a young real estate mogul from Rio de Janeiro, was also on friendly terms with Flávio Bolsonaro, the eldest son of President Jair Bolsonaro of Brazil. Flávio Bolsonaro, who has recently become the focus of a corruption investigation, shared a picture on social media calling Mr. Figueiredo a “successful businessman with good sense and a highly qualified political vision.”

The developers behind LSH Barra are now being charged with corruption, money laundering and crimes against the financial system. Current and former directors of the state-owned Banco de Brasília and intermediaries who facilitated fake receipts are also facing charges.

Efforts to reach LSH Barra and Mr. Figueiredo for comment on Thursday were not successful.

Investigators overseeing the probe, which they called Operation Circus Maximus, said more than 40 million reais, or $11 million, in bribes were paid. The investments stood to affect hundreds of thousands of pension fund contributors.

“The contempt those involved had for the consequences of their actions is undeniable,” Frederico Siqueira, a federal prosecutor, said in a statement, adding that the losses incurred as a result of the scheme totaled about $110 million.

Prosecutors said the bribes were frequently paid in cash but some were in kind, including VIP tickets to the Rock in Rio mega-concert and free catering for a wedding party.