Instagram thinks you want IGTV previews in your home feed

If you can’t beat or join them… force feed ’em? That appears to be Instagram’s latest strategy for IGTV, which is now being shoved right into Instagram’s main feed, the company announced today. Instagram says that it will now add one-minute IGTV previews to the feed, making it “even easier” to discover and watch content from IGTV.

IGTV, you may recall, was launched last year as a way for Instagram to woo creators. With IGTV, creators are able to share long-form videos within the Instagram platform instead of just short-form content to the Feed or Stories.

The videos, before today, could be viewed in Instagram itself by tapping the IGTV icon at the top-right of the screen, or within the separate IGTV standalone app. Instagram’s hope was that IGTV would give the company a means of better competing with larger video sites, like Google’s YouTube or Amazon’s Twitch.

Its users, however, haven’t found IGTV as compelling.

That means the bigger creators weren’t developing premium content or exclusives for IGTV, but were instead experimenting by replaying the content their fans could find elsewhere. Many are still not even sure what the IGTV audience wants to watch.

IGTV’s standalone app doesn’t seem to have gained much of a following either.

The app today is ranked a lowly No. 228 on the U.S. App Store’s “Photo and Video” top chart. Despite being run by Instagram — an app that topped a billion monthly users last summer, and is currently the No. 1 free app on iOS — fewer are downloading IGTV.

After seeing 1.5 million downloads in its first month last year — largely out of curiosity — the IGTV app today has only grown to 3.5 million total installs worldwide, according to Sensor Tower data. While those may be good numbers for a brand-new startup, for a spin-off from one of the world’s biggest apps, they’re relatively small. 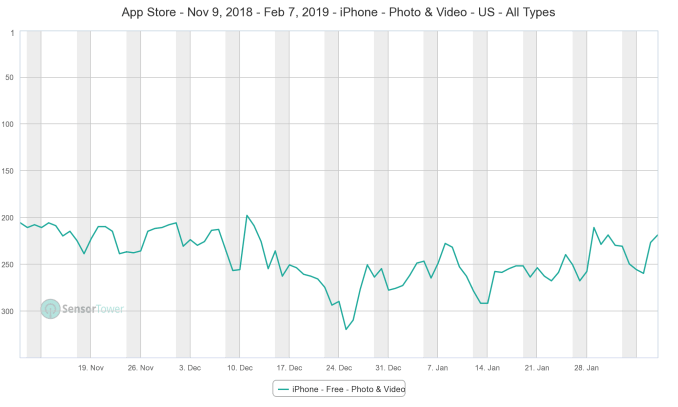 As BuzzFeed reporter Katie Notopoulos opined last year, “I’m Sorry To Report Instagram Is Bad Now.” Her point of concern was the impact that Stories had on the Instagram Feed — people were sharing to Stories instead of the Feed, which made the Feed pretty boring. At yet, the Stories content wasn’t good either, having become a firehose of the throwaway posts that didn’t deserve being shared directly on users’ profiles.

On top of all this, it seems the Instagram Feed is now going to be cluttered with IGTV previews. That’s. Just. Great.

Instagram says you’ll see the one-minute previews in the Feed, and can tap on them to turn on the audio. Tap the IGTV icon on the preview and you’ll be able to watch the full version in IGTV. When the video is finished, you’re returned to the Feed. Or, if you want to see more from IGTV, you can swipe up while the video plays to start browsing.

IGTV previews is only one way Instagram has been developing the product to attract more views in recent months. It has also integrated IGTV in Explore, allowed the sharing of IGTV videos to Stories, added the ability to save IGTV Videos and launched IGTV Web Embeds.