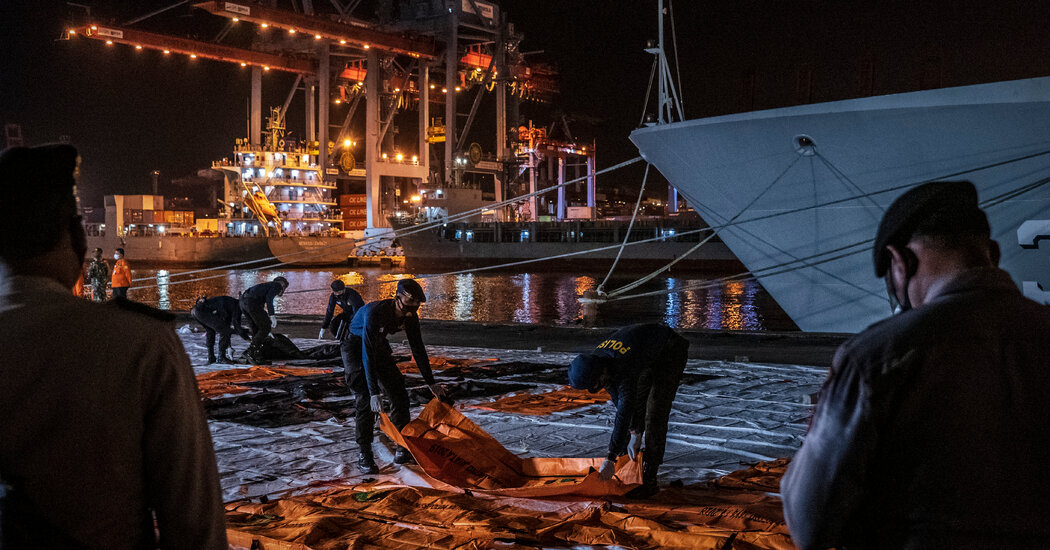 LANCANG ISLAND, Indonesia — Hendrik Mulyadi was checking his crab traps when he heard a huge explosion on the water nearby. The sea suddenly rose, lifting the Indonesian fisherman’s boat as smoke filled the air.

“I’m lucky it didn’t hit me,” he recalled on Monday, sitting at his home on Lancang Island and still visibly shaken by what he saw. “It was like lightning, very fast. It exploded when it hit the water. I saw debris floating. It was airplane debris.”

Mr. Hendrik, 30, was one of five crab fishermen who were out working on the water Saturday afternoon when Sriwijaya Air Flight 182 fell from the sky minutes after takeoff with 62 people onboard, 10 of them children and babies. The plane crashed into the Java Sea, about 300 feet from where Mr. Hendrik was fishing.

Normally a sleepy island with relatively few visitors, Lancang has become a base for the aircraft search and recovery operation led by Basarnas, Indonesia’s national search and rescue agency. The crash site is less than a mile from the island’s mangroves, coconut and banana trees.

The islanders, many of whom live in colorful, single-story homes, can now see dozens of vessels offshore, combing the area for wreckage and bodies and trying to recover the black box.

The Sriwijaya flight, which was bound for the city of Pontianak on the island of Borneo, is the third passenger plane in just over six years to crash into the Java Sea after departing from airports on Java island.

Air Asia Flight 8501 crashed into the Java Sea off the coast of Borneo in December 2014 with 162 people aboard as it flew from the Indonesian city of Surabaya to Singapore. Investigators eventually blamed the disaster on the failure of a key component and an improper response by the flight crew.

And in October 2018, Lion Air Flight 610 nose-dived into the Java Sea northeast of Jakarta, the capital, minutes after takeoff with 189 passengers and crew on board to Pangkal Pinang. The anti-stall system malfunctioned on the Boeing 737, a different plane from the one in the crash this weekend.

Lancang is one of the so-called Thousand Islands, which actually number about 110 and are scattered in the Java Sea north of Jakarta. Some of the islands are popular tourist destinations. Others, like Lancang, are devoted almost exclusively to fishing.

“Since the Lion Air crash, I often think when I’m on the sea and I see a plane pass by, what if an airplane crashes here?” Mr. Hendrik said. “There are many fishermen here. We would die.”

Less than a mile long and a third of a mile wide, Lancang is home to about 2,100 people, nearly all of them connected to the fishing trade. The small, mostly Muslim community is just 15 miles northeast of Jakarta and one of the closest of the Thousand Islands to the city’s Soekarno-Hatta International Airport.

There are no cars and residents get around on foot or by motorbike. The main road is only one lane wide, and it takes less than an hour to walk all the way around the island.

Few of the islanders have ever flown on an airplane. On clear days, they can see them pass overhead as they take off from Jakarta for northern destinations. Still, Mr. Hendrik said he never could have anticipated what happened on Saturday.

“I never thought a plane crash could happen here,” he said.

The island’s village chief, Mahtum, 47, who like many Indonesians uses only one name, said many families on the island eke out a living and lead simple lives. Lancang has been virtually untouched by the coronavirus, with just three cases that were detected last week. But the islanders live under the threat of tsunamis.

The highest elevation in the entire Thousand Island chain is 23 feet, leaving many vulnerable to rising sea levels and the kind of extreme storms that delayed the Sriwijaya flight before takeoff. Lancang’s highest point is seven feet above sea level. Some fishermen thought Saturday’s crash was a coming deluge.

“Not only Lancang Island, but all islands in the Thousand Islands are threatened by high tides and strong winds because of climate change,” Mr. Mahtum said.

When the airplane fell into the sea, it was so close to the island that it rattled windows. One fisherman, Sahapi, was on the water with his crew of one, checking his crab traps not far from Mr. Hendrik’s boat when the disaster struck.

Mr. Sahapi, 52, a fisherman on Lancang Island since 1987, said he heard what sounded like a huge explosion. He felt the sea lift his boat and saw flashes of yellow and red beneath the surface.

“I saw debris in the rising water,” he said. “Thick black smoke filled the air and the rain was heavy. The water was yellow and red.”

At first, he thought there might have been a tsunami, then he realized Mr. Hendrik’s boat was closer to the site of the explosion. He decided his friend must have been struck by lightning.

“I was afraid to be rolled by the wave,” he said. “I looked right and left and I didn’t see my friend’s boat.”

“I didn’t hear any airplane sound,” he said.

He hurried home to deliver what he thought was the bad news of Mr. Hendrik’s death. To his relief, Mr. Hendrik returned soon after and reported that there had been an airplane crash.

Mr. Sahapi took police officers from the island out to the scene after he learned of the crash and helped them use an anchor to pull up some wiring and bits of clothing from the aircraft.

By Sunday, searchers had located the airplane’s flight data recorders and hoped to recover them soon. But it could take months before investigators determine the cause of the crash. Efforts continued Monday to extract bodies and recover the data recorders from the wreckage.

The Sriwijaya plane, a Boeing 737-500, was deemed safe to fly before takeoff and the airline had never suffered a crash that resulted in fatalities on board. More than 50 ships and thousands of people are involved in the search and recovery.

Mr. Hendrik, who was born and raised on Lancang, started fishing with his father as a child and has been a fisherman ever since. His crew of two was on his 33-foot boat with him at the time of the crash.

He said he was still in such shock after what he witnessed that he declined to go with the police to show them the location.

“I was still in trauma,” he said. “I just sat at home shaking, and I was stuttering while speaking. I have lost my appetite until now. I’m still shocked.”

The authorities have not allowed the Lancang crab fishermen to check their traps near the crash site since Saturday. Mr. Hendrik has 550 traps waiting in the sea.