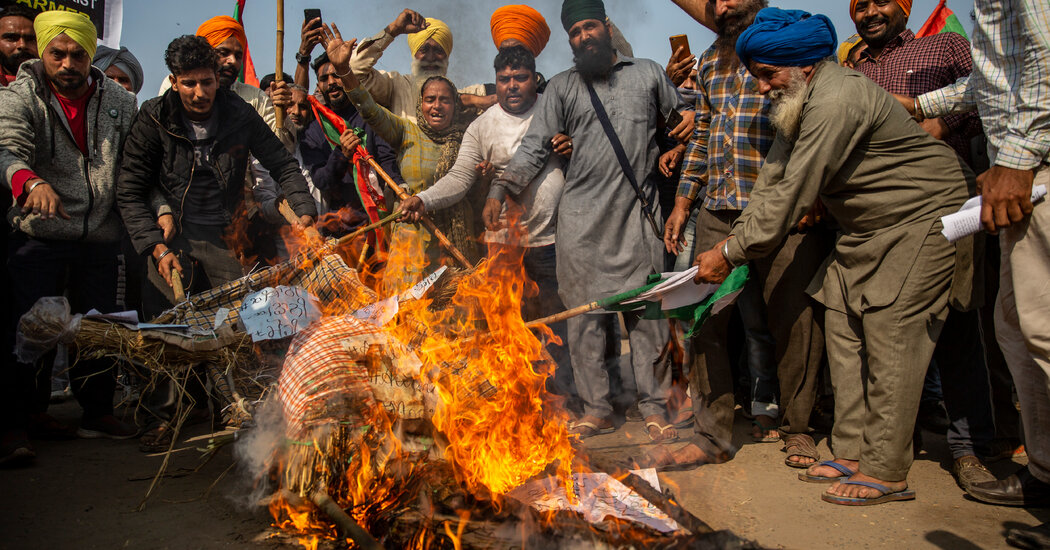 NEW DELHI — Aligning themselves squarely with India’s angry farmers, opposition leaders on Tuesday accused the government of cracking down on dissent, saying they had been detained while seeking to join broadening protests against the country’s new pro-market agricultural policies.

The growing agitation of India’s farmers, which is galvanizing support from nearly all sections of the heavily agricultural country, has increasingly rattled the government of Prime Minister Narendra Modi.

Opposition figures in Delhi and in the states of Uttar Pradesh, Punjab and Haryana said they had been detained by the police under the direction of Mr. Modi’s government. On Tuesday, police officers barricaded the residence of Arvind Kejriwal, the chief minister of Delhi, refusing to allow workers from his party to go inside. The police relented after the party workers held a protest.

Mr. Kejriwal has openly come out in support of the farmers’ demands to roll back Mr. Modi’s agricultural policies that the farmers say threaten their livelihoods. Mr. Kejriwal said the police had stopped him from departing his residence because he had plans to join a farmer protest on the outskirts of Delhi. “They did not want me to go sit with them and show my support,” he said Tuesday night.

The Delhi Police, which comes under the direct rule of Mr. Modi’s government, had effectively put Mr. Kejriwal under “house arrest,” even though the police continued to deny the accusation, said Manish Sisodia, Delhi’s deputy chief minister.

“The chief minister refused to allow farmers to be put in jails. They have turned the chief minister’s residence into a jail,” he told journalists outside Mr. Kejriwal’s house, where several party members and supporters gathered in protest.

For the last couple of weeks, hundreds of thousands of farmers from all over the country have been camping outside New Delhi to protest Mr. Modi’s new farm policies, which they see as his government’s effort to hand farmers’ land over to big business. The protests, which have gradually spread throughout the country and increasingly mirror the protests over a contentious new citizenship law, have become a test of Mr. Modi’s grip on power in the world’s largest democracy.

Just a couple of weeks ago, when thousands of farmers from the neighboring states of Punjab and Haryana started encircling the capital, Mr. Kejriwal’s home minister denied permission to the Delhi Police to hold protesting farmers inside the city’s stadiums, which it planned to effectively turn into prisons.

Mr. Modi’s government has been talking to the farmers but the negotiations have made little progress. On Tuesday evening, farmer leaders said they were attending a meeting with Amit Shah, Mr. Modi’s home minister, known to be a tough negotiator.

Many farmers see the new rules, which the Modi administration pushed through Parliament in September, as the beginning of the end of a decades-old system that had guaranteed minimum prices for certain crops. They also curtail farmers’ ability to challenge disputes in courts.

Mr. Kejriwal, who belongs to the progressive Aam Aadmi Party that governs the capital, has emerged as one of the thorniest critics of Mr. Modi and his Bharatiya Janata Party, which firmly controls the government.

On Monday, Mr. Kejriwal met the protesting farmers and said that his party would fully back the farmers’ call for the nationwide strike on Tuesday to protest against the farm laws.

“Today, the country’s farmers are in trouble. It is our duty as Indians to stand with them and serve them,” he said.

But Mr. Kejriwal is far from being the only critic to have come under pressure.

On Monday, police officers in the Indian state of Uttar Pradesh, which is ruled by Mr. Modi’s top lieutenant, Yogi Adityanath, detained his main rival Akhilesh Yadav and leaders from Mr. Yadav’s Samajwadi Party, while they were en route to participate in a rally to support the farmers.

The Bharatiya Janata Party, Mr. Yadav said in a Twitter posting, “is frustrated because the public has joined the farmers in protest.” He accused Mr. Modi’s government of “double standards,” saying it arrested opposition leaders for flouting Covid-19 restrictions, while his own party was busy organizing public events that drew massive crowds.

On Tuesday afternoon, Chandrashekhar Azad, the leader of Bhim Army, a Dalit-rights organization, said that the state police of Uttar Pradesh had detained him since morning, preventing him from joining the farmers’ call for a nationwide strike. It was unclear on Tuesday night whether he had been released.

Mr. Azad said he feared that the country was moving toward authoritarianism, as it did in the 1970s, when the country’s then government under the leadership of Indira Gandhi had jailed critics and opposition leaders, while declaring a state of emergency.

On Tuesday, as opposition parties, farmers and traders’ groups took to the streets in several Indian states to register their protest, they blocked national highways, trains and rolled down the shutters of their shops to send a message that they support the protesting farmers.

K.T. Rama Rao, a minister in the state of Telangana, who sat on a protest in the middle of a highway between the tech hubs of Hyderabad and Bengaluru, said it was just the beginning. Mr. Rao said that guaranteed minimum prices of crops was every farmer’s “primary right.” He said: “Today, this government, through these three acts, has literally put it in the domain of the corporates to decide and dictate.”