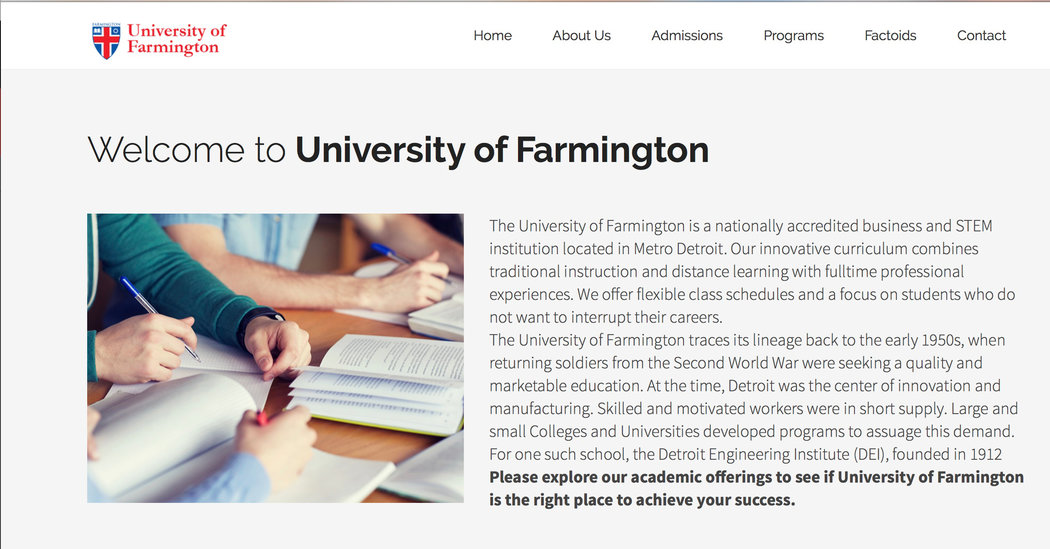 NEW DELHI — India has lodged a protest with the United States government after several Indian students were detained there in connection with their enrollment in a fake university, following an undercover operation.

The American authorities said this past week that they had indicted eight people accused of exploiting the country’s student visa system. They were said to have helped foreign nationals illegally remain in the United States by enrolling them into the University of Farmington in Farmington Hills, Mich., which billed itself as a “nationally accredited business and STEM institution” with an innovative curriculum, flexible class schedules and a diverse student body.

But the private university was being secretly operated by agents of the Department of Homeland Security to expose immigration fraud, according to federal prosecutors who announced charges in the case.

The Indian government said on Saturday that it had issued a rare “démarche” to the United States Embassy in New Delhi, telling it that Indian officials needed immediate consular access to the detainees.

“We underlined that students, who may have been duped into enrolling in the ‘University’, should be treated differently from those recruiters who have duped them,” the Indian Foreign Ministry said in a statement.

The Indian government also urged the United States to release the students from detention, without deporting them.

Though the American government did not disclose the nationalities of those involved, the Indian Foreign Ministry said on Saturday that “several Indian students” had been detained. Indian news outlets reported that more than 100 students had been held in the United States.

In a statement on Jan. 30, the Immigration and Customs Enforcement said eight people had been charged with conspiracy to commit visa fraud and harboring aliens for profit.

“Homeland Security Investigations special agents uncovered a nationwide network that grossly exploited U.S. immigration laws,” Steve Francis, the Homeland Security Investigations special agent in charge, said in the statement. “These suspects aided hundreds of foreign nationals to remain in the United States illegally by helping to portray them as students, which they most certainly were not.”

The agency said that the defendants had collectively profited in excess of $250,000.

The university in the Detroit area was operated for almost two years by special agents as part of an undercover operation starting in 2017, the statement said.

“All participants in the scheme knew that the school had no instructors or actual classes,” it said.

China, India and South Korea together sent 56.1 percent of all international students in the United States in 2017-18, an annual survey by the Institute of International Education showed last year.