In Indonesia, Outlaw Gold Miners Poison Themselves to Survive 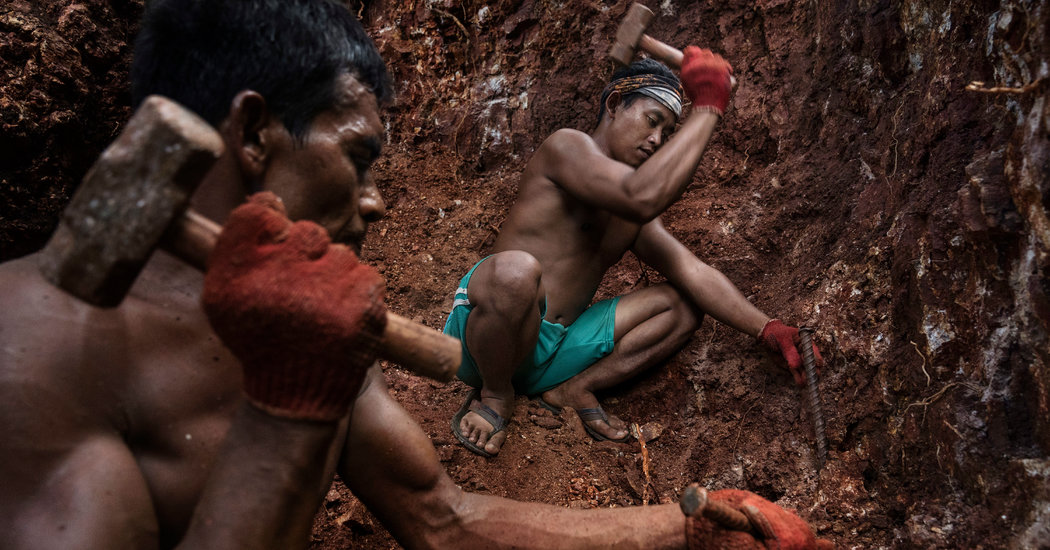 TALIWANG, Indonesia — The wildcat miner had something to prove: Processing gold ore with liquid mercury was perfectly safe. So he drank some of the toxic chemical, choosing the promises of gold fever over the pain of mercury poisoning.

“I have no worry about mercury,” bragged the fast-talking Syarafuddin Iskandar, 58. “I drank it. We gave it to the cows and the buffalos. They drank it. Nothing happened. There’s no problem.”

His stunt has made him famous in the gold fields of Sumbawa, an Indonesian island 100 miles east of Bali where makeshift mining camps dot the jungle hills. But it also illustrated the stark choice the illegal miners here face. In order to earn a living they effectively poison themselves, their communities and the environment by using mercury, an outlawed but popular way to extract gold from ore.

For decades, Mr. Syarafuddin and thousands of small-scale miners like him have worked illegally in West Sumbawa on land the government leases to large mining companies. The outlaw miners pay nothing for rights to the land but reap as much as $6 million a month in gold.

About one million small-scale gold miners operate across Indonesia, the world’s largest island nation, and the outlaw industry presents a vexing paradox for the country.

The use of mercury in the wildcat camps results in devastating effects on health and the environment. The heavy metal is well known as a slow-acting poison that seeps into the food chain, causing birth defects, neurological disorders and death. But because the mines are a short-term boon to the economy — employing people who might otherwise live in crushing poverty — the government is reluctant to shut them down.

The competing interests of the local people, the government, environmentalists and large mining companies that control land where wildcat miners operate are now coming to a head in West Sumbawa. This time a large mining company is taking steps, which it says are meant to protect the environment.

This year, officers from a feared Police Mobile Brigade Corps, armed with assault rifles, climbed through dense jungle to shut down the mountaintop camps of dozens of outlaw miners.

The miners had squatted there for years, using mercury that poisoned the soil and a nearby stream. The site was previously controlled by Newmont Goldcorp, an American company and one of the largest mining businesses in the world.

The police ordered the miners to dismantle their camps, cut up their equipment with a chain saw and block the mine entrances with debris. The wildcatters seethed with anger as the miners were forced to destroyed their operations.

“We are crushed that they are closing this mine because we have no other way to make a living,” said one outlaw mine operator, Zaenal Abidin, who had employed two dozen men to work his claim.

Amman Mineral acquired the vast land concession and huge Batu Hijau open-pit copper mine from Newmont in 2016 during a push by the government to assert national control over mineral resources.

With a pipeline that dumped massive amounts of mine waste into the sea, Newmont gained a reputation for damaging the environment.

Closing the unauthorized mines is part of a campaign by Amman Mineral to stop illegal mining and uncontrolled mercury use on the former Newmont concession and another, known as Indotan, that it oversees 20 miles north.

“Initially, we thought of it as just illegal pillaging of resources,” said Amman Mineral’s director, Alexander Ramlie. “But when we looked deeper at it, we realized it is a more serious social problem. They are creating an environmental disaster.”

The vast majority of West Sumbawa’s 7,000 wildcat miners are on the Indotan site, which Amman Mineral’s partners recently took over in a separate deal.

Much of the mining takes place in the hills above Lake Taliwang, a shallow lake northeast of Taliwang town.

A 2016 study found that so much of the miners’ mercury reached the lake that eating just one lake fish could exceed a person’s mercury allowance for a week. A second study that surveyed miners found that many had high mercury levels and some were experiencing early symptoms of mercury poisoning, such as finger tremors and sleep disturbances.

But in the absence of government warnings or enforcement of the ban on mercury use, it is easy for miners to dismiss the idea that it is hazardous.

Wildcat miners have been operating for decades on the Indotan concession, where they have established permanent communities and an industrial-scale village for processing ore. The miners operate openly without fear that the police will interfere. On one road, they have set up a checkpoint to control access to their diggings.

Some government, police and military officials also are said to profit from the illicit gold trade, which is estimated at $5 billion a year.

The miners will fight any attempt to drive them off the land without providing other jobs, said Anton, a Sumbawa native who owns mines and mills. Like many Indonesians, he uses one name.

Wearing flashy 22-karat necklaces made from gold his mine produced, he questions why big companies like Newmont and Amman Mineral get lucrative mining concessions while he and his fellow miners are branded as illegal.

“Why do you allow the outsiders to operate while we, the locals, are forbidden from doing the work?” he asked.

The mine bosses and their workers have good reason not to give ground. Miners in the Taliwang region reported making an average of 15 times more from gold mining than from other occupations, according to the survey of 55 miners.

Officials said the illegal operations are the second-largest contributor to the economy of West Sumbawa Regency, after Amman Mineral’s legal operation.

The outlaw miners are so well entrenched that the head of their 5,000-member association, Mustafa, served for years as deputy leader of the local parliament.

Amman Mineral’s main focus is finding and developing rich copper deposits. But gold is commonly found along with copper and Mr. Ramlie, the company director, fears that word of a big discovery could incite another gold rush to West Sumbawa.

“We can see that if we don’t contain this problem now and it is made known that Sumbawa has a lot of easily extractable gold deposits, this island could be crawling with all sorts of illegal miners and very pervasive use of mercury,” he said. “That will be a disaster.”

But equally disastrous, Mr. Ramlie said, would be if the police or troops confronted miners in large numbers.

“Beyond a certain scale, it’s going to be like civil war to try to contain them,” he said.

Finding alternate employment for the miners is a huge challenge in a country where 26 million people — 10 percent of the population — live in poverty.

Officials said they were unsure how to proceed. Persuading miners not to use mercury has largely been unsuccessful.

“This is a big dilemma,” said the West Sumbawa regent, H. W. Musyafirin. “If we stop them, we are faced with the economic problem of how to feed them.”