In Egypt, Tourists Torn Between Ancient Temples and Coronavirus Tests 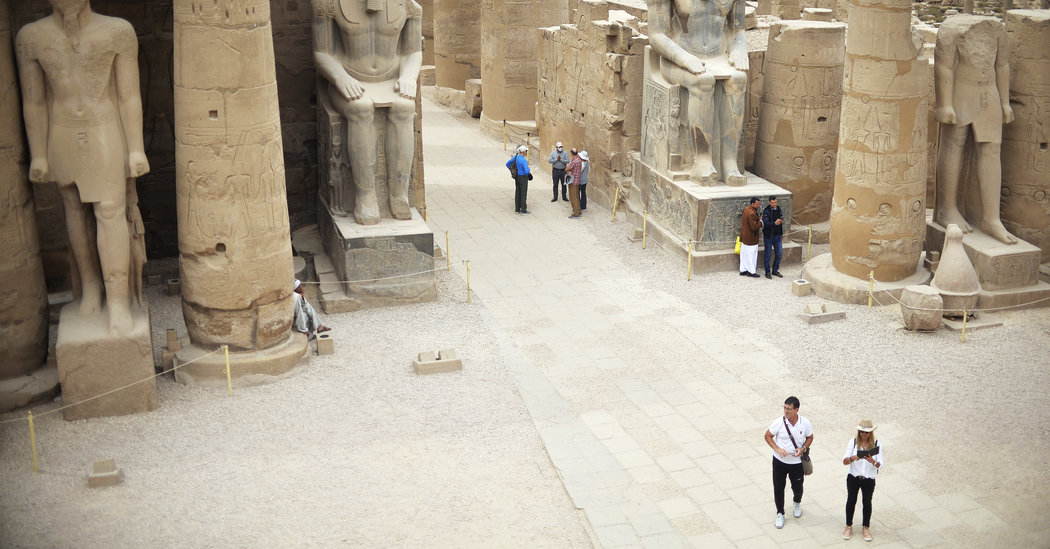 CAIRO — When tourists in Luxor woke up on Monday to find themselves confined to their hotels or cruise ships on the Nile, it seemed that Egypt was taking extreme measures to confront the coronavirus in the ancient town at the heart of its tourism industry.

Government doctors were sent out to test visitors, hoping to stop the spread of the illness. Yet only a fraction of people ended up getting tested, and even before any of the results came back, business quickly returned to normal — with tourists unleashed en masse to visit the town’s fabled temples.

The contradictory and often chaotic approach in Luxor reflects a major dilemma facing Egyptian officials: Can the government continue to welcome cash-carrying visitors at the same time it tries to battle a looming public health crisis in the jewel of its tourism industry?

Luxor, home to the iconic Valley of the Kings and King Tutankhamen’s tomb, is now the center of the country’s coronavirus outbreak. On Friday and Saturday, 45 passengers and crew members aboard a riverboat, the A Sara, tested positive for the virus and were taken by military air transport to an isolation unit at a hospital on Egypt’s north coast.

With the outbreak unfolding, Egypt’s tourism minister visited one of Luxor’s temples on Sunday to declare that it was safe and open to visitors.

“Thank God, people are here,” the minister, Khaled el-Enany, said at the Karnak temple, where tourists lined up to enter.

Beside him, Egypt’s health minister, Hala Zayed, warned people not to “exaggerate” about the scale of the crisis. “We will get through this together,” she said

But even as they spoke, the cruise boat at the center of the outbreak was docked at a nearby riverbank — with 136 people quarantined on board — stoking fears that Egypt could be on the verge of a major problem.

The sense of urgency heightened on Sunday night, when a 60-year-old German tourist died at a hospital in the Red Sea resort Hurghada — Egypt’s first fatality. The tourist had come from Luxor.

The contrasting scenes in Luxor in recent days illustrated the country’s precarious balancing act in the face of the outbreak: Even as doctors administered tests on Monday, they did not want to get in the way of anyone’s vacation.

Yara Ahmed, an Egyptian journalist at a film festival in Luxor, said that of the 400 people at her hotel, only 10 were tested. And once those tests were administered, everyone was allowed to leave immediately — even the people who had been tested.

“People got angry and said, ‘We should all be tested,’” Ms. Ahmed said by phone. “The doctors said, ‘That’s all we can do, and if you don’t like it, complain to the ministry.’”

At best, such a testing strategy would indicate if the coronavirus has spread from the infected ship onto Egypt’s shore, said Dr. Cyrus Shahpar of Vital Strategies, a global public health organization.

“But it’s not a containment strategy, because you’re not containing anyone,” he said.

Until Friday, Egypt had just three declared coronavirus cases, one of the lowest rates in the Middle East. On Monday night, it said it had 59 cases, most on the ship in Luxor, and there is deep uncertainty about how widely the virus has spread into a country of 100 million people.

But already, Luxor has become a hub for transmitting the coronavirus to other countries.

In the past week or so, at least 29 tourists who visited Egypt in February tested positive after returning home. The infected tourists are mostly American and French, and several of them traveled on the A Sara, the Nile cruiser now quarantined at Luxor.

The World Health Organization says that the virus came to the boat via a Taiwanese-American woman who left Egypt on Feb. 1. Egypt says it did not learn of her infection until March 1, and the first infected crew members were discovered on the A Sara on March 6.

Even so, some Egyptians are skeptical that their government is telling them the truth.

Under the nation’s authoritarian president, Abdel Fattah el-Sisi, the news media has been largely muzzled, and the government has repeatedly hidden the truth to avoid international embarrassment or censure, such as when it refused to admit that an Islamic State bomb brought down a Russian jetliner over Sinai in 2015.

This time, officials insist they are being transparent. The health ministry says that it has conducted 2,166 tests and that it is working closely with the World Health Organization to track down anyone who has come in contact with an infected person.

One reason populous countries like Egypt and Indonesia may have low virus rates so far, Dr. Shahpar said, is because they lack the resources or health care systems to test on the scale of nations like South Korea or Italy.

Luxor is a site of ancient wonders of enduring fascination to foreigners, but its centrality to the nation’s tourism industry has left it vulnerable before.

The town was the site of a terrorist massacre in 1997, when Islamist militants sprayed gunfire at tourists outside a temple, killing 62 people. The stated goal of the attackers was to inflict major economic damage on Egypt by choking its tourist industry.

Now the coronavirus is posing a new threat. A tour operator on the Nile said several of his customers had quit their river tours on Monday and were flying home. Other companies in Luxor have canceled their tours entirely.

On Sunday, the Egyptian Travel Agents Association said tourist bookings were down 80 percent compared with the same period last year.

In Luxor, the virus has sowed fear among workers in the tourism industry. State-run media outlets have reported that some cruise workers quit their jobs in recent days, fearing they might get ill.

On Monday evening, the town wore a deserted look.

But one London man, Laurence Wheeler, 64, was out for a stroll. Mr. Wheeler said he had been tested at his cruise ship, which was docked on the edge of the town, on Monday morning.

“This is causing problems for everyone,” he said. “But I’m not scared, because I don’t think I’m going to fall ill.”