If Tesla can break this level, a short squeeze could deliver 45 percent rally: Piper Jaffray

Tesla shares have roared higher as the rest of the market has spiraled down.

The automaker is up 37 percent in the past three months, the top performer in the Nasdaq 100, which has plunged 8 percent.

“The shorts are getting fairly nervous, the short interest ratio has been falling since about the April time frame,” Johnson said Friday on CNBC’s “Trading Nation.”

Tesla has short interest at 22 percent of its float, below its peak of 31 percent in April.

If Tesla can break through a key level of resistance, the short covering could propel its stock even higher, says Johnson.

“If we get a close above this $390 level, it’s going to suggest a topside breakout with a measured price objective based on the charts perhaps about $525 to $550,” said Johnson. “The shorts are going to be covering quickly and providing even a further squeeze higher from here.” 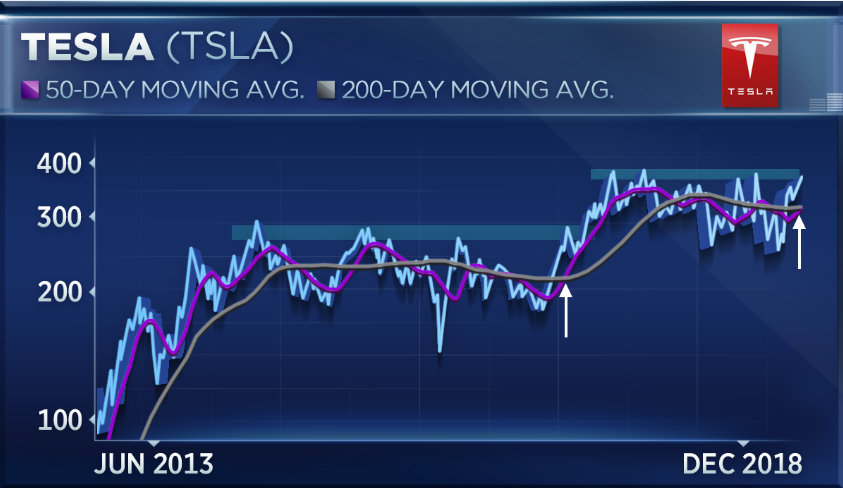 Even as the stock has charged higher in recent months, one strategist has not changed his tune on the automaker.

“I can’t get behind the company at all,” Mark Tepper, president and CEO of Strategic Wealth Partners, said on “Trading Nation” on Friday. “It’s still a gamble and that doesn’t mean that the stock price can’t go up, but I’m sure as heck not going to sit here and hold my breath while they figure out whether they want to run out of money or actually make some money.”

Its shares have had a turbulent few months, reaching a 52-week high in August after CEO Elon Musk falsely tweeted that he had secured funding for a buyout and then plummeting 36 percent to its October bottom.

Tepper says he has concerns over the management team, particularly Musk, and the company’s ability to continue to deliver high-growth numbers. On top of that, he says its operational opacity makes it hard to judge valuations.

“There’s just too much guesswork that goes into figuring out whether they can make money on a sustainable basis, so we’re going to sit on the sidelines until our concerns are addressed here,” said Tepper.