‘I love the patterns’ on this airline’s chart, says technician

Travel stocks moved higher Thursday, lifted by a slew of strong earnings from American Airlines, Southwest Airlines and JetBlue Airways. But if the partial government shutdown continues, these stocks may soon be grounded.

Delta and Southwest execs are among those warning that if the shutdown continues — at 34 days it’s now the longest on record — the impacts could hit the airline industry hard.

For instance, fewer government workers are travelling, and airlines can’t get approval for new aircraft and routes. Additionally, more missed paychecks could weigh on consumer sentiment, which in turn could lead to a slowdown in air travel.

Southwest was one of the airlines sounding the alarm when it reported fourth-quarter earnings Thursday. While the company beat analyst estimates for both earnings per share and revenue, the company said that the shutdown has already cost it between $10 million and $15 million.

But Todd Gordon, founder of TradingAnalysis.com, believes that despite the short-term headwinds, this stock is ready to take flight.

“Southwest Airlines, LUV, is showing the best relative strength to the parent index which is XAL,” he said Thursday on CNBC’s “Trading Nation.” “LUV is showing a very strong chart in a strong airlines sector.”

The stock was already inching up toward its 200-day moving average, Gordon noted, and the company’s strong fourth-quarter results should continue to drive gains. Shares of Southwest closed up 6.3 percent at $54.21 on Thursday. 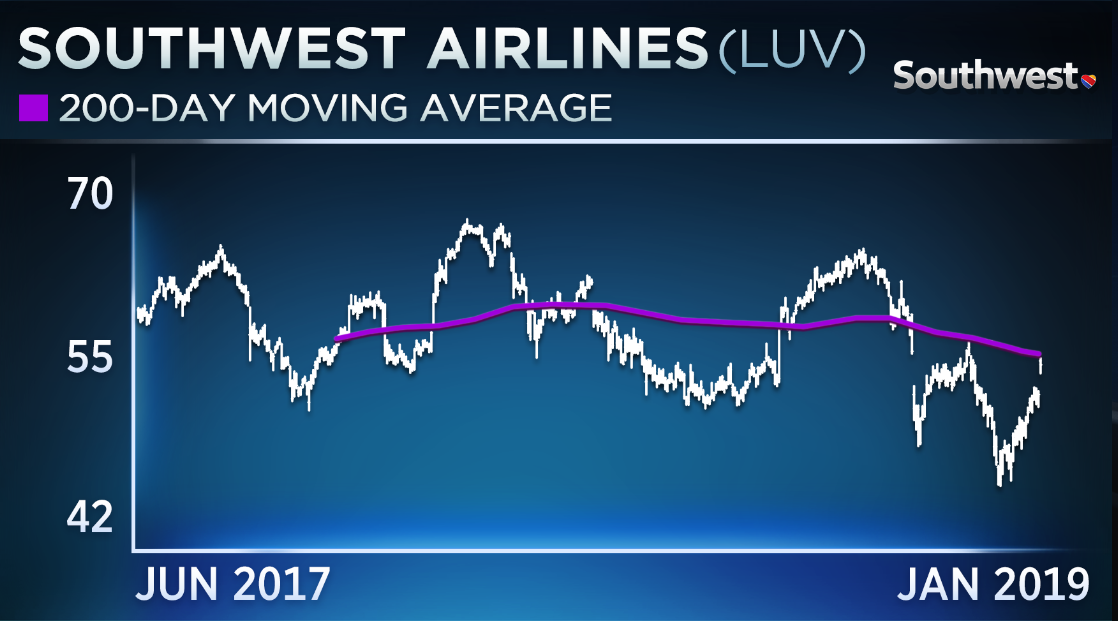 “I love the patterns here. So what you’re seeing here is we are approaching the 200-day moving average … after a strong earnings report here it looks like there is enough momentum to continue through. I don’t see any reason why we can’t get up towards those highs and of course overall market stabilization would help.”

He also noted that if oil stays below $55 per barrel that could be a tail wind for Southwest and airline stocks as a whole.

Within the broader transport sector, Mark Tepper, president and CEO of Strategic Wealth Partners, thinks Carnival Cruise is a good bet for investors. He likes that the company offers experiences, and he believes that the cruise line’s international exposure make it well-positioned for 2019.

Shares of the cruise operator have fallen nearly 23 percent over the last year as investors worried that too many ships in operation would soften demand. But Tepper contended that the company is aware of its challenges, and is actively working to fix them going forward.

“They were growing their capacity faster than demand for cruise travel. But now they’re much more efficient with the rollout of their new ships … you’ve seen their fuel efficiency improve much more versus Royal Caribbean and other competitors over the course of the last few years,” he said, adding that “a great guest experience … helps them create demand that exceeds capacity growth.”

Finally, he noted that the stock is “cheap” at 11 times forward earnings, making it a “great play here.”

Carnival is currently trading in a bear market, with shares sliding more than 24 percent from their January 2018 record high. The company’s stock closed up 1.4 percent Thursday at $55.02.