‘I Could Just Vanish’: In Kabul, Pocket Notes to Prevent Anonymous Death 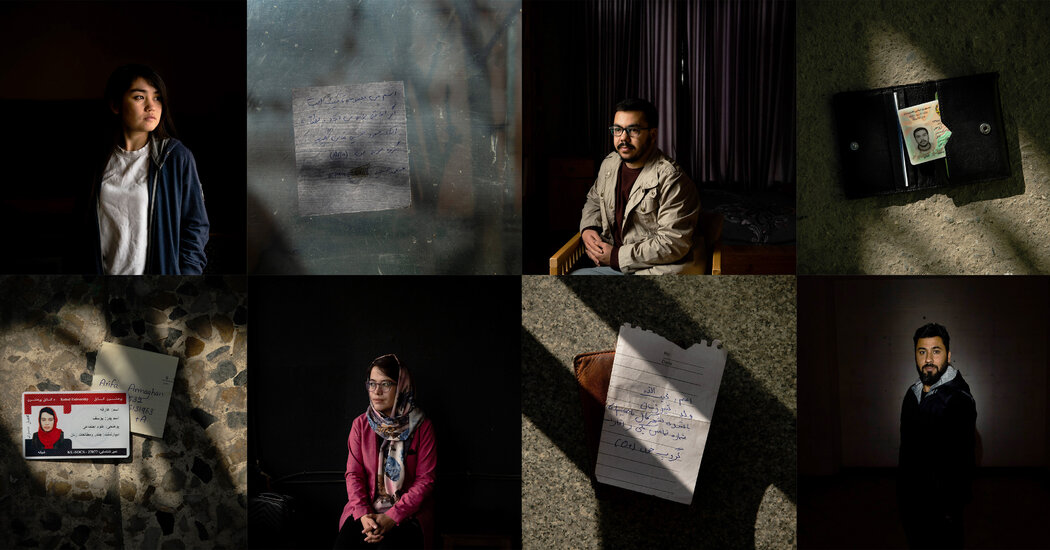 KABUL, Afghanistan — Tareq Qassemi, a bookseller, lost a close friend to a suicide bombing that killed 80 civilians in Kabul one scorching summer day. Four years later, he still mourns his friend, but also the nameless Afghans who perished with him.

“Their bodies were shattered — the only thing that remained was a shoe or a bag or a pen,” he recalled.

Mr. Qassemi, 28, now carries a special slip of paper, known as a pocket note, that contains his full name, his blood type and the phone numbers of family members — like a homemade, civilian version of a soldier’s dog tags. He knows too well how fragile and ephemeral life in Kabul can be, and he refuses to become an unidentified victim.

“I could get killed on my way to work or in a car or anywhere, and no one knows about me and they will look for my body everywhere,” he said. “I could just vanish.”

The bearers of pocket notes hope the slips of paper will help emergency medical workers identify an injured person’s blood type for a lifesaving transfusion. They might also help authorities quickly summon family members for precious final moments with a mortally wounded loved one. And they could help identify a badly disfigured corpse.

For some young people, the pocket note has become an essential element of daily life. It can validate human existence — an identity marker ensuring that if violent death comes, it does not have to be anonymous.

“If something happens to me, who will collect my body? What if I need blood?” said Masouma Tajik, 22, a computer science student in Kabul, whose family lives hundreds of miles away.

Those questions confronted Ms. Tajik when she was stuck in a Kabul traffic jam one recent day, terrified that a car bomb might explode at any moment, she said. She now carries a slip of notebook paper with her personal information. The note says, “If anything happens to me.”

In the years since the 2001 American invasion unleased a deadly Taliban insurgency, each new day has brought the potential of sudden death by car bombing, shooting, roadside explosion or rocket attack.

Since signing a February agreement with the United States, the Taliban have curtailed mass-casualty attacks in urban centers. But the country has seen a rise in targeted assassinations, singling out government functionaries, prosecutors, journalists, religious scholars and civil society activists in near-daily attacks with guns or magnetic bombs attached to vehicles. The government has accused the Taliban of carrying out most of these killings, but they have repeatedly denied responsibility.

Some officials worry that at least some of the attacks are being committed by political factions outside the Taliban to settle old scores, a disturbing trend harking back to Afghanistan’s civil war a generation ago.

At the same time, the Islamic State has claimed responsibility for recent suicide bombings and other mass-casualty attacks in Kabul. A suicide bomber killed 44 people at a tutoring center on Oct. 24, and gunmen killed 21 more at Kabul University on Nov. 2.

The constant threat of a sudden, brutal death has left many Afghans with a sense of despair and fatalism. The most prosaic acts can end violently — commuting to work, visiting a friend, buying groceries, striding into a classroom.

“Every morning when I leave home, I am not sure if I’ll come back alive,” said Arifa Armaghan, 29, who works for a nongovernmental organization.

“This is how we live in Afghanistan,” she added. “It is not just me. I talk to some people who say goodbye to their families every morning because they don’t know what will happen to them during the day.”

Ms. Armaghan has carried a pocket note since July 2017, when a close childhood friend died in a Taliban suicide attack on a government minibus that also killed 23 other people. The body of the friend, Najiba Hussaini, was identified by her trademark silver ring, studded with a turquoise-colored stone.

“When you lose people you know, you feel that you are next, and you feel death coming closer to you,” Ms. Armaghan said.

After every mass bombing, she said, she and her friends send urgent text messages to loved ones. “There is always a fear that someone will never get back to you,” she said.

Some of those who carry pocket notes say they have considered leaving the country.

“But it is hard to decide when my brain is busy thinking about who will come to kill me,” said Mujeebullah Dastyar, 31, a geographic information specialist. For the past two years, he said, he has carried a pocket note with his name, blood type and a relative’s phone number.

Some Afghans have posted messages on Facebook, warning of threats against them or detailing premonitions of death.

Burhanuddin Yaftaly, 24, a former lieutenant in the Afghan army, was shot and killed by a Taliban gunman while attending his sister’s wedding in the northern province of Badakhshan in December. The bride was wounded when she tried to save her brother, police said.

Mr. Yaftaly’s father, Khairuddin Ziaye, 61, said his son had been threatened by the Taliban. Shortly before his death, Mr. Yaftaly posted a final note on his Facebook page: “Dear friends: I am sorry for any mistakes I have made in the past. I have been receiving many threats from different sides. I think I won’t be able to survive anymore.”

In Western nations, people routinely carry an array of items that can identify them, but in Afghanistan, things like driver’s licenses and employee badges are not as common, and credit cards are not used. Afghans are issued a tazkira, a national identity document, but few carry the card because considerable time and effort are required to replace it if lost.

Rafi Bakhtiar, 21, a consultant, said he has carried his tazkira since the Kabul University attack on Nov. 2. That day, he said, neighbors searched into the night for their daughter, a student, before the university confirmed that she had died in the attack. The school used a contact number in a phone found on the student’s body to call Mr. Bathtiar’s sister, a close friend.

“If I get killed, there should be evidence on me so people can get in touch with my family, and they don’t search the whole city to find my body,” Mr. Bakhtiar said.

Like many Kabul residents, Mr. Bakhtiar said he had contempt for insurgents who kill civilians, but he also blamed the American-backed government for failing to safeguard its citizens.

“If the government doesn’t do anything to protect us, you lose your hope and you can’t dream for a better future,” he said.

Mr. Bakhtiar said he had accepted the harsh reality that he could die, capriciously and violently, on any given day anywhere in the capital.

“We are broken. We are shattered,” he said. “The angel of death is flying over Afghanistan.”