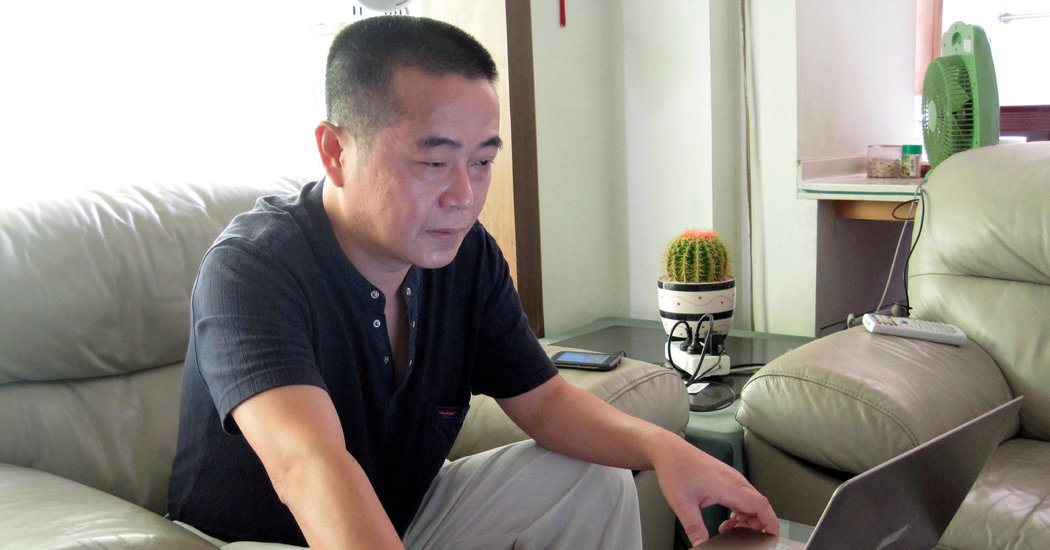 BEIJING — One of China’s most prominent human rights activists, the blogger Huang Qi, went on trial on Monday on charges of leaking state secrets, and American diplomats seeking to attend the proceedings said they had been denied access.

The trial has drawn intense international attention, in part because Mr. Huang, 55, has nephritis, a potentially fatal kidney disease. In addition, Mr. Huang’s 85-year-old mother recently traveled from their home in Sichuan Province to Beijing to ask foreign embassies there for help in obtaining his release, but she was reportedly beaten and is now detained in a hospital.

American diplomats seeking to attend the trial in the western Chinese city of Mianyang were “denied access to the courtroom,” a press officer for the United States Embassy said on Monday.

Mr. Huang founded the website 64 Tianwang, which relied on a nationwide network of volunteers to report on land expropriations, corruption and labor disputes. The name refers to the June 4, 1989, crackdown on protesters around Tiananmen Square in Beijing. The site’s core mission, it says, is to “stand in solidarity with those who have no power, no money and no influence.”

During Tianwang’s heyday earlier this decade, Mr. Huang and his volunteers fielded up to 150 calls a day, which would feed into short articles. The site was hosted outside China and blocked inside the country, but many were able to read the posts by using software to bypass censorship.

“He represents this class of activists who used websites to expose official wrongdoings,” said Patrick Poon, a researcher with Amnesty International in Hong Kong. “His was one of the most famous.”

That reputation, however, also resulted in two decades’ worth of legal problems.

Mr. Huang initially drew praise from pro-government outlets like People’s Daily, the Communist Party’s main mouthpiece, for helping to find missing persons. When he began to investigate other social problems, however, he ran into trouble.

He was jailed from 2000 to 2005 for publishing articles by overseas dissidents, as well as ethnic and religious critics. It was during this period, he said in interviews, that he contracted serious ailments, especially after spending a year in solitary confinement, sleeping on a concrete floor.

After his release, he again worked on the website but was jailed in 2010 after publicizing corrupt building practices that contributed to the death toll in the May 2008 earthquake in Wenchuan, Sichuan Province, reaching at least 69,000. Released in 2011, he continued to publish until his arrest in 2016.

Although he resides in Chengdu, Mr. Huang is being tried in the nearby city of Mianyang. After he obtained documents related to a dispute between a resident of Mianyang and local officials, he was accused of divulging secret documents, although they were reportedly given to the petitioner by government officials.

Speaking on the condition of anonymity, a volunteer who works for Mr. Huang’s site said the defendant was seriously ill. The volunteer said the government had released a video that showed a doctor praising Mr. Huang’s medical care, which he said paralleled government efforts in 2017 to play down the illness of the Nobel Peace Prize laureate Liu Xiaobo, who ended up dying in government custody.

In a 2013 interview, Mr. Huang said he viewed his role as requiring monitoring officials so they respond more fairly to problems. “But the main thing we can do is provide a record,” he said. “Authorities can then see what is happening.”

“It is a cause that benefits the fundamental, long-term interests of all society,” Mr. Tan wrote. “And as such, ought to receive encouragement and support at all levels of government.”