BASILAN, the Philippines — Across the islands of the southern Philippines, the black flag of the Islamic State is flying over what the group considers its East Asia province.

Men in the jungle, two oceans away from the arid birthplace of the Islamic State, are taking the terrorist brand name into new battles.

As worshipers gathered in January for Sunday Mass at a Catholic cathedral, two bombs ripped through the church compound, killing 23 people. The Islamic State claimed a pair of its suicide bombers had caused the carnage.

An illustration circulated days later on Islamic State chat groups, showing President Rodrigo Duterte of the Philippines kneeling on a pile of skulls and a militant standing over him with a dagger. The caption on the picture sounded a warning: “The fighting has just begun.” 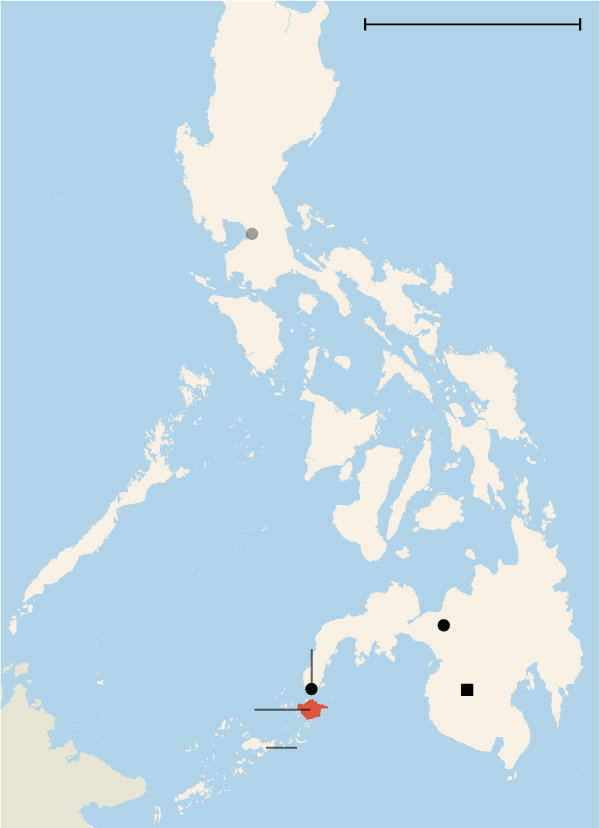 The Islamic State’s territory in Iraq and Syria, once the size of Britain, has shriveled after four years of American-backed bombing and ground combat by Kurdish and Shiite militia fighters. What is left is a tiny village in southeast Syria that could fall any day.

But far from defeated, the movement has sprouted elsewhere. And here in the Mindanao island group of the southern Philippines, long a haven for insurgents because of dense wilderness and weak policing, the Islamic State has attracted a range of militant jihadists.

“ISIS has a lot of power,” said Motondan Indama, a former child fighter on the island of Basilan and cousin of Furuji Indama, a militant leader who has pledged fealty to the group. “I don’t know why my cousin joined, but it’s happening all over.”

The group first made a big push for southern Philippines recruitment in 2016, circulating videos online beckoning militants who could not travel to its self-proclaimed caliphate in Iraq and Syria. Hundreds of fighters poured in from as far away as Chechnya, Somalia and Yemen, intelligence officials said.

The next year, militants who had pledged allegiance to the Islamic State took over the city of Marawi in Mindanao. By the time the army prevailed five months later, the largest Muslim-majority city in the country lay in ruins. At least 900 insurgents were killed, including foreign fighters and Isnilon Hapilon, the Islamic State’s East Asia emir.

Mr. Duterte declared victory over the Islamic State. But his triumphalism apparently has not deterred its loyalists from regrouping.

“ISIS has money coming into the Philippines, and they are recruiting fighters,” said Rommel Banlaoi, chairman of the Philippine Institute for Peace, Violence and Terrorism Research. “ISIS is the most complicated, evolving problem for the Philippines today, and we should not pretend that it doesn’t exist because we don’t want it to exist.”

Since the Jan. 27 cathedral bombing on the island of Jolo, the Philippine military has responded with airstrikes and 10,000 soldiers in Jolo, according to Col. Gerry Besana, spokesman for the regional military command in the city of Zamboanga.

But even as the military offensive intensifies, the government avoids conceding that the Philippines is in the global slipstream of Islamist extremism. Top officials have played down incidents in which the Islamic State has sent foreign fighters and financing to the Philippines for deadly attacks. The violence, they often say, is squabbling between Muslim clans, or common banditry.

Within a week of the Jolo cathedral bombing, the police declared the case solved, blaming a local militant group, Abu Sayyaf, with scant acknowledgment of how many of its insurgents have partnered with the Islamic State.

Visiting the Jolo cathedral, Our Lady of Mount Carmel, Mr. Duterte and his entourage trampled over evidence, church officials said. Forensic investigators were kept from the crime scene for days. Dogs gnawed on body parts.

“We are asking for an independent investigation because it was too quick, too soon to say it’s a closed case,” said Jefferson Nadua, a parish priest. “This is a serious matter that needs to be looked at more deeply because the threat is not just local. It’s maybe coming from outside, from ISIS.”

For decades, local insurgencies like Abu Sayyaf, which launched a campaign of bombings and beheadings, have thrived in the lawless wilderness and seas stretching toward Malaysia and Indonesia.

In the 1990s, after Filipinos returned from the mujahedeen battlefields in Afghanistan and hard-line madrassas in Yemen and Saudi Arabia, local grievances fused with global calls for jihad. In a crescent-shaped swath of Southeast Asia, militants dreamed of a caliphate free of secular governance.

Jemaah Islamiyah, the Qaeda offshoot that killed more than 200 people in a Bali nightclub in 2002, trained recruits in Philippine jungles.

Later, as the Islamic State constructed its caliphate in the Middle East, it connected disparate militants in the Philippines under one ideological banner, said Sidney Jones, the director of the Institute for Policy Analysis of Conflict in Jakarta, Indonesia.

“The government didn’t recognize its strength in attracting everyone from university-educated students to Abu Sayyaf kids in the jungle,” Ms. Jones said. “Whatever happens to the pro-ISIS coalition in Mindanao, it has left behind the idea of an Islamic state as a desirable alternative to corrupt democracy.”

Basilan officials say the island is now safe from the Abu Sayyaf separatists who began their fight in 1991. No foreign fighters are hiding in the jungles, the local authorities insist, and they claim that the rebels have been reduced to about 20 trapped stragglers.

But Colonel Besana puts the overall number of militants on Basilan at perhaps 200, and their leader has pledged allegiance to the Islamic State.

Mr. Indama, the former fighter who says he left Abu Sayyaf last year because he rejected the Islamic State’s ideology, claimed he saw foreign operatives in the Basilan jungle camps.

The idea that no overseas fighters have stolen onto Basilan was shattered last July when it was the site of the first suicide bombing in the Philippines.

The Islamic State claimed that the attack, which killed 11 people, had been the work of a Moroccan recruit. The Philippine authorities initially denied the attack had been by a suicide bomber, much less a foreigner. Weeks later, they admitted it had been carried out by a German-Moroccan suicide bomber.

Last year, a Spaniard was arrested in Basilan with bomb-making materials. An Egyptian carrying $19,000 in cash was also stopped on his way to Basilan, according to Mujiv Hataman, the governor of the autonomous Muslim region of the Philippines.

Mr. Hataman, who travels by armored convoy, expressed worry that if the bombing raids intensify in Jolo, militants will slip undetected into Basilan via small boats. Already, they travel among Indonesia, Malaysia and the Philippines over poorly patrolled seas.

“One problem goes away and another starts,” Mr. Hataman said.

Interior Secretary Eduardo Año has blamed the Jolo attack on an Indonesian couple, although Indonesian investigators say there is little evidence.

Colonel Besana acknowledged that a number of foreign fighters were hiding in the Jolo hills, under the command of Hatib Hajan Sawadjaan, who is believed to have replaced Mr. Hapilon as the regional Islamic State emir.

The Islamic State’s lure seems never far from the surface in the southern Philippines. At a government ceremony in Basilan where houses were awarded to former Abu Sayyaf rebels under a long-gestating peace deal to bring autonomy to the Muslim south, security was so heavy that they were outnumbered by Philippine soldiers.

Jem Habing, 22, a former Abu Sayyaf fighter who said he had joined at age 11, like many children in his village, seemed noncommittal when asked if he might rejoin.

“They convinced me that if you die in battle, you will be rewarded in the hereafter,” he said. “They said it was the right path.”