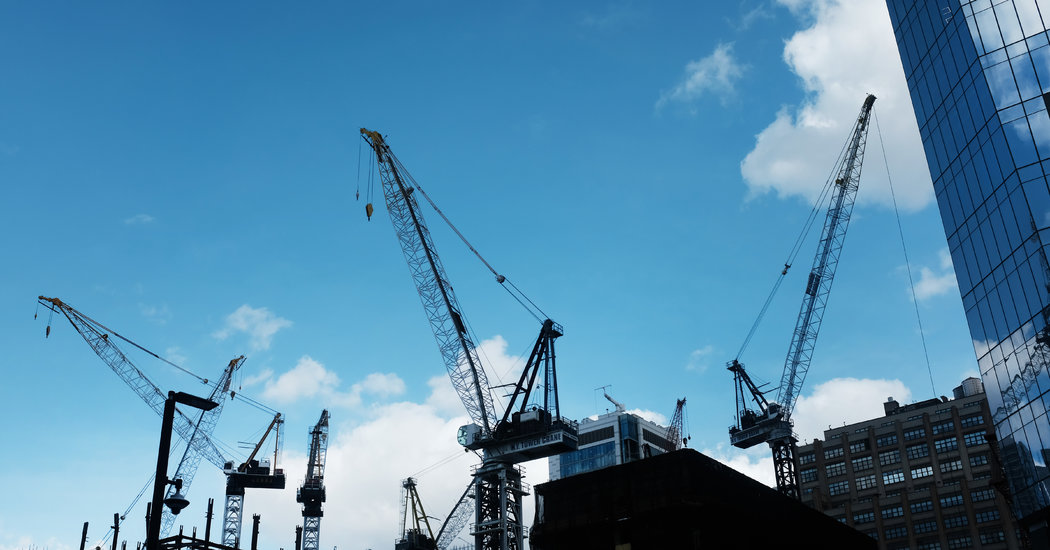 When Facebook was searching for another New York office, one big enough to fit as many as 6,000 workers, more than double the number it currently employs in the city, it had one major demand: It needed the space urgently.

So after the company settled on Hudson Yards, the vast mini-city taking shape on Manhattan’s Far West Side, existing tenants were told to move and a small army of construction workers quickly began to revamp the building even before a lease had been signed.

Facebook’s push to accommodate its booming operations is part of a rush by the West Coast technology giants to expand in New York City. The rapid growth is turning a broad swath of Manhattan into one of the world’s most vibrant tech corridors.

Four companies — Amazon, Apple, Facebook and Google — already have big offices along the Hudson River, from Midtown to Lower Manhattan, or have been hunting for new ones in recent months, often competing with one another for the same space.

Cities across the United States and around the world have long vied to establish themselves as worthy rivals to Silicon Valley. New York City is certainly not anywhere close to overtaking the Bay Area as the nation’s tech leader, but it is increasingly competing for tech companies and talent.

New York’s rise as a tech hub comes as industries that have long dominated the city’s economic landscape are transformed by technology, and are themselves increasingly reliant on software engineers and other highly skilled workers.

The growth in New York is occurring largely without major economic incentives from the city and state governments. Officials are mindful of the outcry last year over at least $3 billion in public subsidies that Amazon was offered to build a corporate campus in Queens.

The retail behemoth, stung by the backlash, canceled its plans abruptly in February. It is continuing to add jobs in the city, although at a slower pace.

Still, Amazon’s announcement last month that it would lease space in Midtown for 1,500 workers renewed a debate over whether incentives should be used to woo huge tech companies to New York.

Opponents of the earlier deal, including Representative Alexandria Ocasio-Cortez, Democrat of Queens, said Amazon’s decision to expand in Manhattan showed that New York was so attractive that tax breaks were unnecessary.

Others responded that the Hudson Yards space the company was leasing paled next to the campus proposed for Long Island City, Queens, and to the 25,000 people Amazon had pledged to employ there.

Tech companies are choosing New York to tap into its deep and skilled talent pool and to attract employees who prefer the city’s diverse economy over technology-dominated hubs on the West Coast. New York is also closer to Europe, an important market.

“For a long time, if you lived in the broader tech sector, there was inertia that brought you to Silicon Valley,” said Julie Samuels, executive director of Tech: NYC, a nonprofit industry group. “So many people wanted to live here and move here, but felt the jobs weren’t here. Now the jobs are here.”

Google has grown so quickly and is so squeezed for space that it is temporarily leasing two buildings until a much larger development in Manhattan near the Holland Tunnel, St. John’s Terminal, is ready in 2022.

The big tech firms started in New York with small outposts. Google’s first New York employee, a sales worker, arrived in 2000, and worked out of a Starbucks in Manhattan. It was the company’s first office outside California.

Tech industry offices were once mostly filled with sales and marketing employees who needed to be closer to their customers and to industries like fashion, finance, media and real estate that power the city’s economy.

Over the past five years, though, the makeup of the companies’ combined New York work force has come to resemble the West Coast version: a mix of engineers and others involved in software development.

At Google’s New York office, highly skilled workers now outnumber their colleagues in sales and marketing. Of the nearly 800 job openings that Amazon has in the city, more than half are for developers, engineers and data scientists.

“Every line of business and every platform is represented quite healthfully,” said William Floyd, Google’s head of external affairs in New York, the company’s largest office except for its Mountain View, Calif., headquarters. “Not everyone wants to be in California.’’

Oren Michels, a tech adviser and investor who sold Mashery, a company based in San Francisco, to Intel in 2013, said that New York City had become a refuge for tech workers who did not want to be surrounded solely by those working in the same industry.

“You have younger engineers and those sorts of people who frankly want to live in New York City because it’s a more interesting and fun place to live,” he said. “San Francisco is turning into a company town and the company is tech, both professionally and personally.”

Mr. Michels said that his family had bought a home in Manhattan in 2014 with a plan to split their time between San Francisco and New York. They soon decided to live full time in New York, where Mr. Michels is on the boards of four tech firms.

The number of tech jobs in New York City has surged 80 percent in the past decade, to 142,600, from 79,400 in 2009, according to the New York State Comptroller’s office. (The business services industry, which includes accountants and lawyers and is the largest private sector, employed 762,000 people in 2018, according to the comptroller’s office.)

Since 2016, the number of job openings in the city’s tech sector has jumped 38 percent, an analysis for The Times by the jobs website Glassdoor found. In November, New York had the third-highest number of tech openings among United States cities, 26,843, behind just San Francisco and Seattle.

It is not only the biggest tech firms that are growing in New York. From 2018 through the third quarter of 2019, investors pumped more than $27 billion into start-ups in the New York City region, the second most in that time for any area outside San Francisco, according to the MoneyTree Report by PwC-CB Insights. (Nearly $100 billion was invested in start-ups in the Silicon Valley area in that period.)

Industries like finance, retail and health care provide more jobs, but the tech sector, with an average salary of $153,000, has become one of New York City’s main economic drivers.

That has raised concerns about whether the industry is intensifying income inequality and making New York unaffordable for more people.

“It should go without saying,’’ she added, “that middle-income, low-wage, poor and unemployed residents in these cities cannot access the luxury housing market nor the rising rents and have been driven out of their communities as a result.”

Jonathan Miller, president of Miller Samuel, a real estate appraisal firm, said that the residential market in Manhattan had been strong in areas where the tech firms had grown.

“I speak to brokerage groups twice a week, and the conversation is always peppered with questions about the tech sector,” Mr. Miller said. “If you have 20,000 employees coming in who are high-wage earners, that can have a pronounced impact.”

The major tech firms are expected to grow to the point that they are among the largest private tenants in New York in the coming years, rivaling longtime leaders like JPMorgan Chase.

Among companies in the technology, advertising, media and information industries, Google and Facebook are now the largest tenants, beating out legacy companies like Condé Nast, News Corp. and Warner Media, according to an analysis performed for The Times by the real estate company Cushman & Wakefield.

Facebook employs 2,900 people in New York, and recently signed the lease at Hudson Yards for 1.5 million square feet in three buildings. In addition to providing space for 6,000 workers, the deal gives the company an option to take over another several hundred thousand square feet in the development.

Facebook executives initially set their sights on a marquee building on Madison Avenue in the Flatiron district, not far from the company’s existing offices, according to a person familiar with Facebook’s plans.

But then Facebook executives toured Hudson Yards and were impressed with the amenities, including shops and restaurants, and with the short walk to major subway lines.

A deal was struck in November, but with a requirement on Facebook’s part that about 300,000 square feet in two buildings, 30 and 55 Hudson Yards, be ready very soon.

Workers were immediately brought in to begin preparing the space and to move out existing tenants.

Two blocks east, Facebook is close to signing a lease for about 700,000 square feet in the 107-year-old James A. Farley Building across from Pennsylvania Station, according to three people familiar with the deal. The property, also known as the Farley Post Office, is being renovated by the Related Companies and another developer, Vornado Realty Trust.

More than 2,500 employees could eventually work there. (The Wall Street Journal first reported on the potential lease.)

“It’s hard to predict future growth, but we believe New York is a vibrant market with a tremendous pool of talent,” a Facebook spokeswoman, Jamila Reeves, said. She declined to comment on the company’s specific plans.

Just north of the Farley building, Amazon said recently that it had signed a lease for 350,000 square feet in a building on 10th Avenue near Hudson Yards, enough space for 1,500 employees. The social media company LinkedIn, whose New York offices are not far away, in the Empire State Building, recently said it would expand to four additional floors in the landmark property.

The tech titan whose intentions in New York are probably least known is Apple.

Executives at the company, which has had an office in the Flatiron area, have toured buildings in that neighborhood and in the Hudson Yards area but a deal has not yet been signed. Apple has inquired about leasing much less space than other big tech companies, roughly 50,000 square feet.

For every West Coast company with a household name that has expanded in New York, there are many large but lesser-known firms with headquarters in the city.

One, Datadog, which provides cloud-based software for businesses, went public in September and is valued at $10.5 billion. The company has 480 employees in its New York offices, up from 125 three years ago.