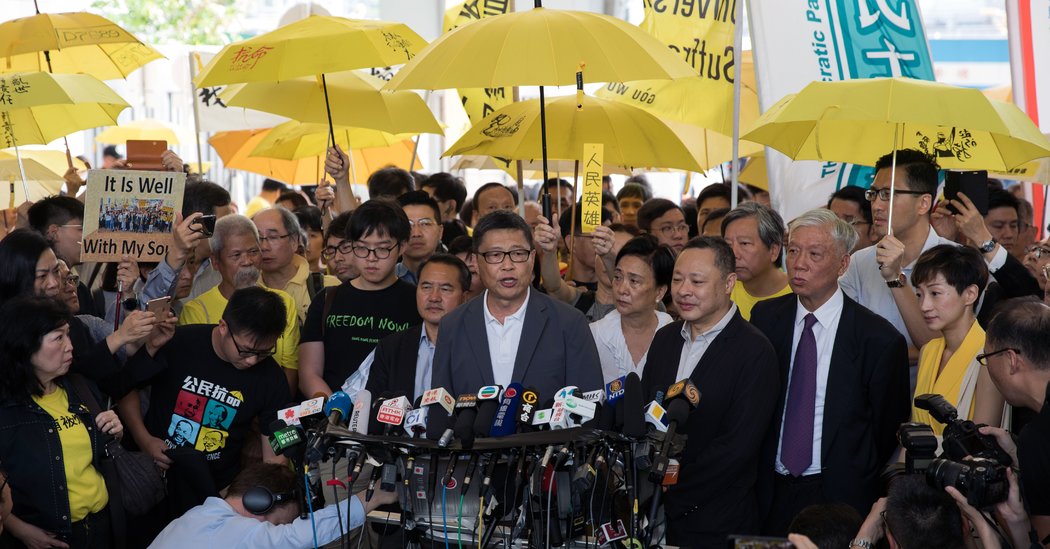 HONG KONG — A Hong Kong court has sentenced democracy activists to prison terms of up to 16 months for their roles in demonstrations that led to a 79-day occupation of major roads in 2014.

The protests five years ago demanded more open elections, and sought to force Hong Kong’s leader to step down. Tens of thousands of people joined sit-ins and peaceful street demonstrations, using umbrellas to shield themselves when the police used tear gas and pepper spray to disperse the crowds. The demonstrations came to be known as the Umbrella Movement.

Two professors, Benny Tai and Chan Kin-man, and a retired pastor, Chu Yiu-ming, who along with six others were convicted this month of public nuisance charges, were sentenced to 16 months in prison. The sentence of Mr. Chu, 75, was suspended for two years because of his age and public service record, meaning that he is unlikely to serve time in prison. Mr. Tai and Mr. Chan were ordered to begin their sentences immediately.

They were founders of Occupy Central With Love and Peace, a group championing nonviolent civil disobedience in pursuit of democratic reforms. Their group had called for a short sit-in of two or three days, but that turned into a much longer occupation of city streets after the police used tear gas and pepper spray on student protesters.

At the sentencing hearing, Judge Johnny Chan of the District Court said the activists had failed to notice the “ordinary folks” who needed to use the public roads to go to work. He noted that none of the activists had expressed regret for their involvement in the movement.

“By regret, I do not mean the defendants should give up their political beliefs or actions,” he said, adding that they owed the public an apology for the “excessive inconvenience and suffering” they had caused.

Maya Wang, a senior China researcher for Human Rights Watch, said in an emailed statement on Wednesday that the length of the sentences “sends a chilling warning to all that there will be serious consequences for advocating for democracy.”

She added that the trial should not have been prosecuted in the first place.

Hong Kong Watch, a rights group, said in a statement, “The peaceful advocacy of democracy practiced by the Umbrella Movement leaders should be commended, not criminalized or punished with imprisonment.”

Five other defendants were also sentenced on Wednesday on related public nuisance charges. Shiu Ka-chun, a lawmaker, and Raphael Wong, a member of a pro-democracy party, were ordered to begin eight-month prison terms.

The eight-month sentences of Eason Chung, a former student leader, and Lee Wing-tat, a retired lawmaker, were suspended. Tommy Cheung, 24, the youngest activist, was sentenced to 200 hours of community service.

The sentencing of Tanya Chan, a lawmaker who was also convicted this month, was adjourned until June 10 because she is set to undergo surgery for a brain tumor discovered after the verdict this month.

The activists said after their convictions that they were honored to serve in the movement, which they reiterated in statements to the court before their sentencing.

“We need to understand that the powerful collude within the political economy, and to find the right spot and hammer on it relentlessly,” Mr. Chung, the 26-year-old former student leader, said in a statement that was translated from Chinese by Hong Kong Free Press. “There are no saints to follow on this journey.”

Mr. Chu, who helped activists escape from China after the deadly 1989 crackdown on demonstrations around Tiananmen Square, said in his statement that he lived in an “age of absurdity.”

“Living in a society on the brink of authoritarianism and of arbitrary rule, let me be a brave bell toller, ringing, waking up sleepy souls,” he said.