Gundlach on 2019: Rising yields to hit stocks, trouble in bonds and a possible bitcoin bounce

Many of DoubleLine Capital CEO Jeffrey Gundlach‘s predictions have come true, including the stock market’s monster sell-off in December. Now here are his latest thoughts on the markets.

The so-called bond king, who manages more than $200 billion, gave his predictions in a Tuesday webcast on a variety of asset classes including stocks, bitcoin and corporate credit.

Gundlach said 2019 will continue to be a volatile year. He said he expects higher yields will hurt stocks in a “tug of war.”

The stock market will be in a push-pull with rates expectations going forward. Gundlach highlighted the difference between the Federal Reserve’s tightening agenda reflected in its dot plot and the bond market’s expectations.

Market-implied rate hike odds have fallen after Fed Chair Jerome Powell recently said the central bank “will be patient” with monetary policy as it monitors the economy.

Gundlach was spot-on with his call on the massive sell-off at the end of 2018. In mid-December, Gundlach predicted that the S&P 500 would go lower when it had already fallen 11 percent from its intraday all-time high, saying “I’m pretty sure this is a bear market.” His call came true a week later on Christmas Eve, when the index dipped into bear market territory briefly, tumbling more than 20 percent from its record high on an intraday basis.

The market has since bounced back with the S&P 500 up 2 percent in the new year, driven by the optimism over US-China trade talks.

Gundlach is also expecting the so-called yield curve to steepen in 2019, contrary to conventional wisdom. 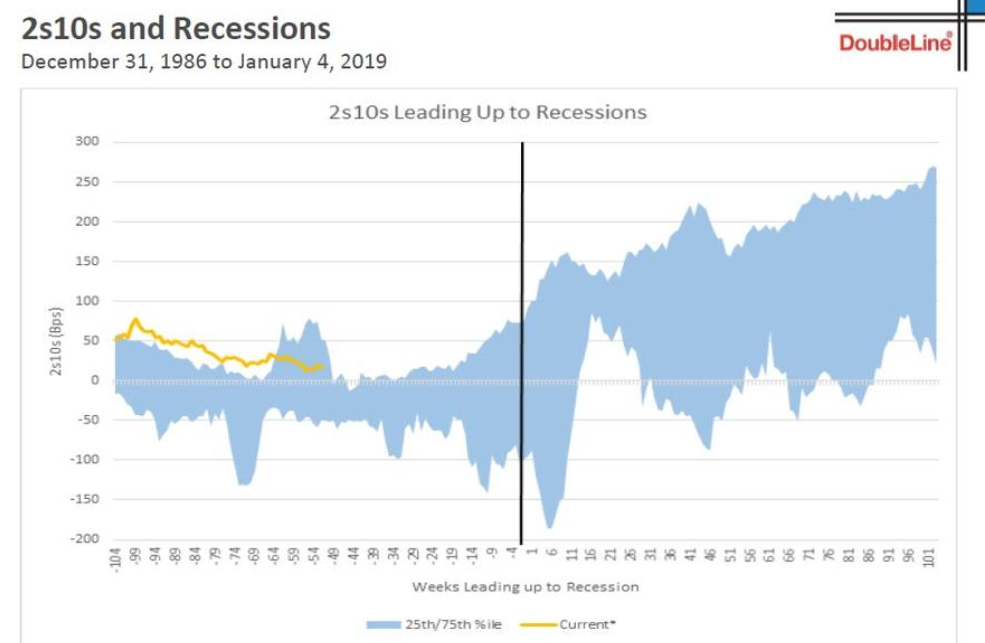 Wall Street has been worried about an inverted yield curve, which could mean a recession is on the horizon. Recessions have followed inversions a few months to two years later, several times over many decades.

In an unlikely call from Gundlach, who previously characterized bitcoin as “the poster child for social mood and market mood,” he said the cryptocurrency could gain as much as 25 percent.

“I don’t recommend anything with bitcoin, really … but if you really want to speculate, I think it could make it to $5,000. Talk about an easy 25 percent,” he said in the webcast, even as he advised to “get the heck out of bitcoin.” 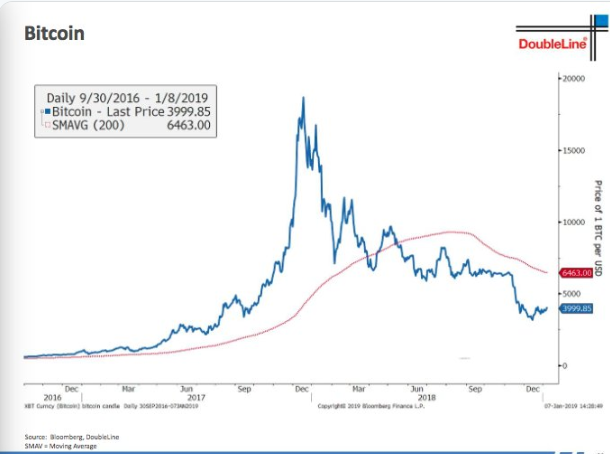 The bond king also issued warnings about the growing leverage both on a government level and company level. With increasing deterioration in corporate credit, he said investors should look for companies with strong balance sheets.

“Use the strength we’ve seen in junk bonds as a gift and get out of them. Investors need to go into strong balance sheets… to survive the zigzag of 2019,” Gundlach said.