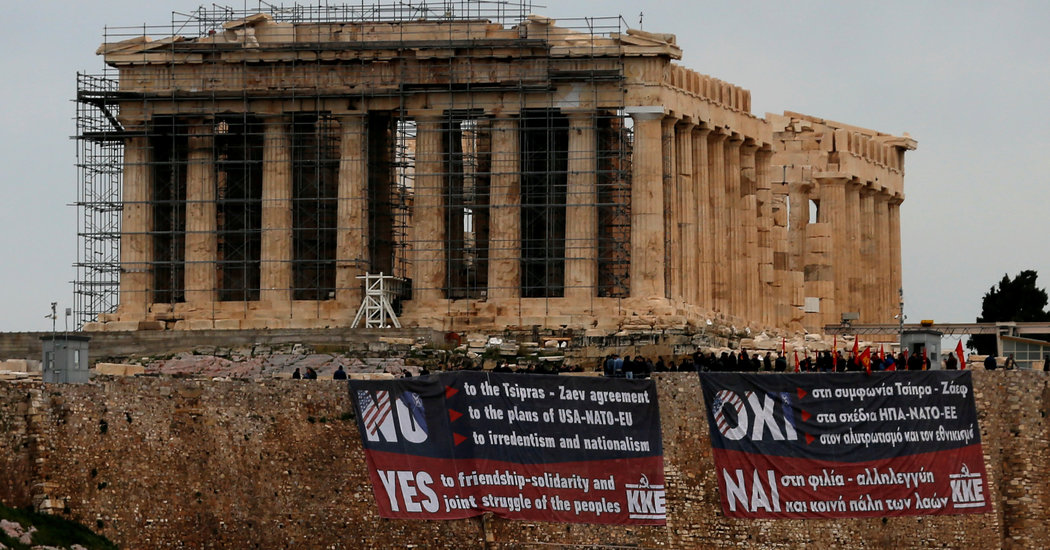 ATHENS — Greek lawmakers were expected on Friday to approve a pact changing the name of neighboring Macedonia, despite vehement protests inside and outside the Parliament over a contentious issue that touches on Greece’s history, national identity and unity.

Called “historic” by Prime Minister Alexis Tsipras and maligned as “harmful for the nation” by the political opposition, the agreement between Athens and Skopje seeks to resolve a 27-year dispute by changing Macedonia’s name to North Macedonia in exchange for Greece’s lifting its objections to its neighbor joining NATO and the European Union.

Greece has long opposed the name Macedonia for the Balkan country, formerly a part of Yugoslavia, saying that it implied a claim to the northern Greek region of the same name, part of the country since ancient times and the birthplace of Alexander the Great. And many Greeks — seven in 10, according to opinion polls — object to the deal, saying that it does not go far enough to protect the country’s interests and cultural heritage.

Public opposition was clear last Sunday, when tens of thousands protested in Athens in a rally that culminated in violence, as groups of right-wing extremists tried to force their way into the Parliament, injuring 25 police officers with clubs and firebombs.

The police were bracing for more upheaval in Athens as three rallies were planned for Thursday afternoon, during the second day of parliamentary debate on the agreement — one outside Parliament and two others, near the United States Embassy, that were organized by far-left groups that contend Western powers are imposing the Macedonia deal on Greece.

The Communist Party draped a giant banner on the walls of the Acropolis, saying, “No to the plans of USA-NATO-EU.”

Protesters were also to gather in Greece’s second city, Thessaloniki, while farmers drove their tractors to the Evzones border crossing with Macedonia.

In messages on social media, organizers of the main rally called on Greeks to demonstrate against “the crime being committed inside Parliament.”

“We cannot watch this on television with our arms crossed,” they said.

Others went beyond protest, throwing firebombs at the home of Theodora Tzakri, a lawmaker from Mr. Tsipras’s leftist Syriza party. The attack in Giannitsa, in northern Greece, caused damage but no injuries.

“In the beginning, MPs were targeted with threatening messages. Then with posters. Then came the assault squads at Parliament. And now we have arson attacks on MPs’ homes,” Mr. Tsipras wrote on Twitter. Politicians who do not condemn violence, he added, “bear a huge responsibility.”

Despite the upheaval, Mr. Tsipras is all but certain to gain approval for the Macedonia pact with the support of a few opposition and independent legislators. Some of his support is expected to come from lawmakers who have broken ranks with Panos Kammenos, the leader of a junior coalition partner, the Independent Greeks, who quit as defense minister this month in protest of the Macedonia deal.

Mr. Tsipras has insisted that his government would remain in power until October, when its four-year term is set to end. Analysts believe, however, that he is likely to call elections earlier, possibly in May.

So many lawmakers asked to speak on the deal that Parliament postponed the vote, which had been expected to take place after midnight on Friday, to mid-afternoon.

One of the lawmakers’ main contentions is that debate on the deal is “inconceivable” without a revised version of Macedonia’s Constitution, reflecting the changes agreed to by the two sides.

The version of the Constitution presented to the Greek Parliament has those changes listed at the end, but Deputy Foreign Minister George Katrougalos insisted on Wednesday that they would be enshrined in the body of the Constitution after the deal’s ratification by Greece.

A conservative former prime minister, Kostas Karamanlis, who was in power when Greece blocked Macedonia’s NATO bid in 2008, said in a written statement that the deal was sealed “in undue haste,” adding that the government “should have respected the sensitivities and listened to the legitimate concerns of the large majority of citizens.”