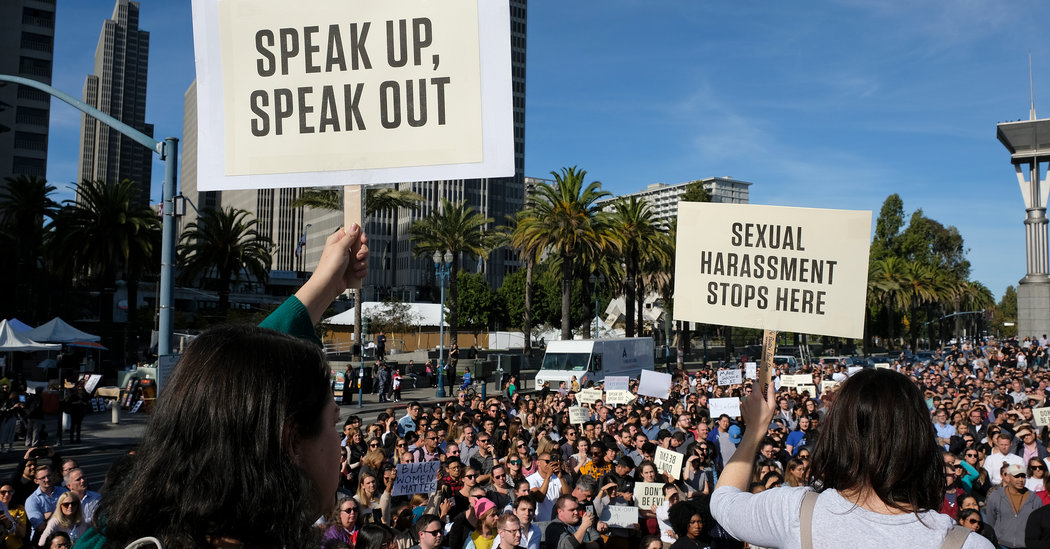 SAN FRANCISCO — Two Google employees, Claire Stapleton and Meredith Whittaker, helped organize a 20,000-person walkout from the company last November. Now they say they have paid a price for their actions.

In a letter shared internally with co-workers on Monday and reviewed by The New York Times, Ms. Stapleton, a marketing manager at YouTube, said Google had demoted her after she urged colleagues to walk out from the company last year over its treatment of sexual harassment. Ms. Whittaker, an artificial intelligence researcher, said in the letter that she had also been “informed my role would be changed dramatically.”

In addition to the demotion, Ms. Stapleton said, Google instructed her to take medical leave even though she was not sick, according to the letter. And Ms. Whittaker said she had been told to abandon her external work at New York University, where she runs research on artificial intelligence and ethics for the university’s A.I. Now Institute.

Ms. Stapleton said she had hired a lawyer and reversed the demotion. Ms. Whittaker did not address whether her role had ultimately changed.

“Only after I hired a lawyer and had her contact Google did management conduct an investigation and walked back my demotion, at least on paper,” Ms. Stapleton wrote in the letter. “While my work has been restored, the environment remains hostile and I consider quitting nearly every day.”

“We prohibit retaliation in the workplace, and investigate all allegations,” a Google spokeswoman said. “Employees and teams are regularly and commonly given new assignments, or reorganized, to keep pace with evolving business needs. There has been no retaliation here.”

The letter was earlier reported by Wired.

In October, The Times reported that Google had provided a $90 million exit package to Andy Rubin, the creator of the Android mobile operating system, after an accusation of sexual harassment against him was found to be credible. The lavish payment after the misconduct outraged Google’s employees. The company’s top executives later apologized and revealed they had fired 48 people for sexual harassment over the past two years, with none receiving an exit package.

But the apologies did not calm employees’ disquiet. Ms. Stapleton and Ms. Whittaker, along with other colleagues, called for employees to walk out of the company for a day in protest. At the time, Ms. Stapleton said in an interview that The Times article had “turned the lights on on the bias, discrimination and systemic inequality women and other groups experience very viscerally at Google.”

On Nov. 1, about 20,000 Google employees left work in locations across the world, including Berlin, Chicago, London, Seattle, Singapore, Zurich and Hyderabad, India, as well as the company’s headquarters in Mountain View, Calif. Some carried signs that said, “O.K. Google, really?” and chanted: “Stand up! Fight back!” Some of the employees talked publicly about how they also faced sexual harassment at work.

Afterward, Google said it would end its practice of forced arbitration for claims of sexual harassment.

“I think it’s pretty straightforward,” said Amr Gaber, a software engineer at Google who helped organize the walkout. “Google has never treated them this way, and then the walkout happened. Now they’re having to deal with being told their work is no longer valuable.”

The meeting on Friday will allow others to speak up about their experiences, Mr. Gaber said. “If we can’t fight fear, then people aren’t going to speak up and we’re not going to listen to the voices that need to be heard,” he said.