Google Claims a Quantum Breakthrough That Could Change Computing 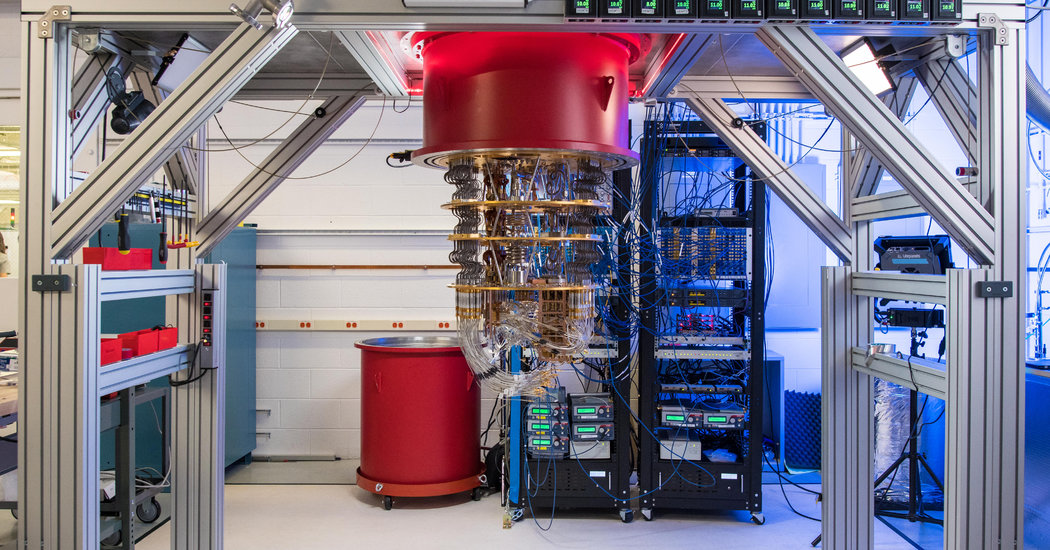 SAN FRANCISCO — Google said on Wednesday that it had achieved a long-sought breakthrough called “quantum supremacy,” which could allow new kinds of computers to do calculations at speeds that are inconceivable with today’s technology.

In a paper published in the science journal Nature, Google said its research lab in Santa Barbara, Calif., had reached a milestone that scientists had been working toward since the 1980s: Its quantum computer performed a task that isn’t possible with traditional computers.

In this case, a mathematical calculation that the largest supercomputers could not complete in under 10,000 years was done in 3 minutes 20 seconds, Google said in its paper.

Scientists likened Google’s announcement to the Wright brothers’ first plane flight in 1903 — proof that something is really possible even though it may be years before it can fulfill its potential.

“The original Wright flyer was not a useful airplane,” said Scott Aaronson, a computer scientist at the University of Texas at Austin who reviewed Google’s paper before publication. “But it was designed to prove a point. And it proved the point.”

A quantum machine, the result of more than a century’s worth of research into a type of physics called quantum mechanics, operates in a completely different manner from regular computers. It relies on the mind-bending ways some objects act at the subatomic level or when exposed to extreme cold, like the metal chilled to nearly 460 degrees below zero inside Google’s machine.

One day, researchers believe, these devices could power advances in artificial intelligence or easily overwhelm the encryption that protects computers vital to national security. Because of that, the governments of the United States and China consider quantum computing a national security priority.

[Quantum computing, one of the “jazziest and most mysterious concepts” in science, has struggled to come of age.]

But first, scientists must prove such a machine can be built, and some researchers cautioned against getting too excited about Google’s milestone since so much more work needs to be done before quantum computers can migrate out of the research lab. Right now, a single quantum machine costs millions of dollars to build.

Many of the tech industry’s biggest names, including Microsoft, Intel and IBM as well as Google, are jockeying for a position in quantum computing. And venture capitalists have invested more than $450 million into start-ups exploring the technology, according to a recent study.

China is spending $400 million on a national quantum lab and has filed almost twice as many quantum patents as the United States in recent years. The Trump administration followed suit this year with its own National Quantum Initiative, promising to spend $1.2 billion on quantum research, including computers.

Traditional computers perform calculations by processing “bits” of information, with each bit holding either a 1 or a 0. That has been the case for decades.

Understanding how a quantum computer is different requires a philosophical leap: accepting the notion that a single object can behave like two separate objects at the same time when it is either extremely small or extremely cold.

By harnessing that odd behavior, scientists can instead build a quantum bit, or qubit, which stores a combination of 1 and 0. Two qubits can hold four values at once. And as the number of qubits grows, a quantum computer becomes exponentially more powerful, making today’s supercomputers look like toys.

Scientists first described the idea in the 1980s, but qubits are fragile. Stringing even a few together can involve years of work. For the past several decades, labs in academia, industry and government have worked on quantum computing through a wide variety of techniques, including systems built around particles of light or electromagnetic fields that trap tiny charged particles.

About 20 years ago, researchers in Japan pioneered “superconducting qubits,” for which certain metals are chilled to extremely low temperatures.

This method has shown particular promise, sparking projects at IBM, Google and Intel. Their machines look nothing like a regular computer. They are large cylinders of metal and twisted wires that are dropped into stainless steel refrigerators. You send information to the machine, as you would to a traditional computer chip, and receive calculations in return.

Google’s paper became a bit of an internet mystery after it was published and then quickly unpublished online in late September. That brief appearance was enough to raise the hackles of researchers at competing companies who believe the Silicon Valley giant is inflating its accomplishment.

On Monday, IBM fired a pre-emptive shot with a blog post disputing Google’s claim that its quantum calculation could not be performed by a traditional computer. The calculation, IBM argued, could theoretically be run on a current computer in less than two and a half days — not 10,000 years.

“This is not about final and absolute dominance over classical computers,” said Dario Gil, who heads the IBM research lab in Yorktown Heights, N.Y., where the company is building its own quantum computers.

Other researchers dismissed the milestone because the calculation was notably esoteric. It generated random numbers using a quantum experiment that can’t necessarily be applied to other things.

Though IBM disputed that Google had really accomplished all that much, Dr. Gil argued that quantum computers were indeed getting closer to reality. “By 2020, we will be able to use them for commercial and scientific advantage,” he said.

Like much of the cutting-edge work being done in corporate research labs, Google’s quantum effort has its roots in academia. In 2014, Google hired a team of physicists who had spent the previous several years working on quantum computing at the University of California, Santa Barbara.

The researchers were expected to discuss their work with reporters later on Wednesday.

As its paper was published, Google responded to IBM’s claims that its quantum calculation could be performed on a classical computer. “We’ve already peeled away from classical computers, onto a totally different trajectory,” a Google spokesman said in a statement. “We welcome proposals to advance simulation techniques, though it’s crucial to test them on an actual supercomputer, as we have.”

The calculation performed by Google’s machine is a way of showing that a complex quantum system can be reliable. The company also believes the random numbers it generates could have practical uses.

As the machines get better over time, they could help improve cryptography, or even aid in the creation of new medicines or materials, said Daniel Lidar, a professor at the University of Southern California who specializes in quantum computing.

“This would be a big deal,” he said. “It has applications in many different places.”

Dr. Lidar said he expected that other scientists would try to disprove Google’s claims. But some see a broader benefit to all researchers working on this near-mythical device.

“Google’s result is a major achievement not just for Google but also for the broader scientific community,” said Chad Rigetti, who worked on IBM’s quantum computing project and now runs his own start-up. (Mr. Rigetti’s wife is an editor for the Opinion section of The New York Times.)

“It is just a short amount of time now before we have commercially relevant problems that quantum machines can solve,” he said.