Ghani Takes the Oath of Afghan President. His Rival Does, Too. 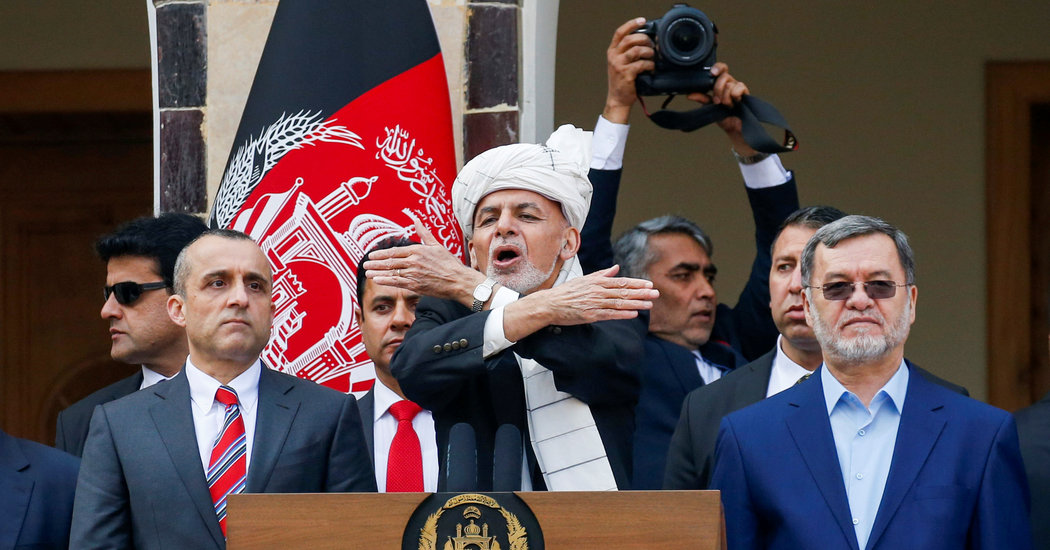 KABUL, Afghanistan — Just a few minutes and a thin wall apart, both President Ashraf Ghani and his chief rival, Abdullah Abdullah, took the oath of office as the president of Afghanistan on Monday, plunging the fragile country into a new crisis during sensitive peace talks.

As both men were delivering their speeches broadcast on split-screens across the country, a barrage of rockets landed in the capital near the site of the ceremonies. Sirens blared in the diplomatic area near the presidential palace.

Mr. Ghani’s inauguration was briefly interrupted, with some in the audience running for cover. But the president refused to leave the stage and urged calm.

“I am not wearing an armored vest,” Mr. Ghani said, opening his jacket. “We have seen big attacks. A couple explosions shouldn’t scare us.”

The capital city had remained under lockdown for much of Monday, as marathon efforts led by U.S. diplomats to prevent a split government following a monthslong election dispute failed. President Ghani, who was declared the winner of a bitterly disputed vote, had announced that he was going ahead with his inauguration. Mr. Abdullah, who accuses Mr. Ghani of winning unfairly through fraud, had said that he would hold a simultaneous swearing-in next door.

Mr. Abdullah has been the chief executive of the coalition government brokered by the United States when a previous election in 2014 ended in another messy stalemate. This is the third presidential election, out of the country’s total of four since the U.S. invasion in 2001, that has been bitterly disputed and has required American mediation to find a way out.

All of this played out in the middle of a U.S.-negotiated peace plan with the Taliban, which calls for a full U.S. military withdrawal over the next 14 months as well as the start of direct talks between the Afghan government and Taliban insurgency.

The Afghan government is supposed to be preparing for those talks now. But the political conflict in Kabul has threatened plans for those to start on Tuesday. And an increasingly fraught disagreement between Mr. Ghani’s government and the U.S. negotiating team over the potential release of thousands of Taliban prisoners threatens to collapse the process in yet another way.

Mr. Ghani was declared the winner by a thin margin of about 12,000 votes above the minimum 50 percent required. Mr. Abdullah’s team has disputed about 15 percent of the total vote. They accuse Mr. Ghani of pressuring the election commission to rush the process of auditing the questionable votes, making sure he begins his second term in office before progress in peace talks shifts the conversation to power-sharing with the Taliban.

A previous attempt by Mr. Ghani to hold his swearing-in late last month was delayed by U.S. shuttle diplomacy, as it would have brought the crisis to a head right on the eve of the Taliban and United States signing their deal in Qatar on Feb. 29, officials said. Mr. Ghani’s advisers said the election crisis needed to be brought to a conclusion so that a government with a clear mandate could lead the talks with the Taliban.

Now, Mr. Ghani’s inauguration, and Mr. Abdullah’s rival ceremony next door, happened on the eve of another milestone in the peace deal: the Taliban and a delegation representing the Afghan government and other parties were supposed to start direct negotiations on Tuesday. That appears unlikely now.

Zalmay Khalilzad, the U.S. special envoy for the talks, came to Kabul soon after signing the deal with the Taliban, in hopes of figuring out a solution between Mr. Ghani and Mr. Abdullah to keep the government from splitting. He shuttled between the two leaders half a dozen times on Sunday, officials said, with the meetings stretching to the early morning hours on Monday.

Mr. Khalilzad even briefly managed to get Mr. Ghani and Mr. Abdullah to meet face to face close to midnight on Sunday, but Afghan officials from both sides said there was no breakthrough.

Advisers to Mr. Abdullah said they had been ready to find a solution to the crisis in the form of an all-inclusive government, something not unlike the current setup negotiated by Secretary of State John Kerry after the 2014 vote ended in a stalemate. The Abdullah team’s bottom line was that whatever form the government took, nothing should validate an official victory through the vote for Mr. Ghani.

Mr. Ghani’s advisers said they were willing to accommodate Mr. Abdullah through a “solution in accordance with the Constitution,” essentially ruling out Mr. Abdullah’s continuing in his current extra-constitutional role as chief executive. But they said that Mr. Abdullah’s demands had made that impossible.

Late into Sunday night, state television broadcast drone footage of the palace boulevards lined with large Afghan flags for the occasion. Representatives and diplomats from 45 countries, and about 2,500 domestic guests, were invited to Mr. Ghani’s event, his inauguration officials said.

Mr. Abdullah’s team, hours after, announced that they had issued 10,000 invitation cards. Seats were arranged around a fountain, and a stage was decorated with flowers.

“We have just sent invites to embassies and foreign organizations in Kabul,” Fazal Ahmad Manawi, a senior adviser to Mr. Abdullah, said on Twitter around 9 p.m.

Around 2 a.m. on Monday, Mr. Manawi tweeted that the American side had told them that Mr. Ghani had agreed to postpone his inauguration to allow more time for negotiations between the two camps. One adviser to Mr. Abdullah, speaking on condition of anonymity, said Mr. Khalilzad had managed to persuade Mr. Ghani to postpone after getting Secretary of State Mike Pompeo into the conversation. There was no immediate confirmation of that claim from American officials.

But just hours later, at 6 a.m., Shahhusain Murtazawi, a senior adviser to Mr. Ghani, said the inauguration was going ahead on Monday as planned.

For many Afghans, the political crisis has been a draining distraction from more dire challenges facing the country, including the resumption of fighting with the Taliban, the spreading of coronavirus, and poverty rates that are growing worse by day.

“I am a member of the cheering squad, we are here to clap and cheer when they speak,” said Noorullah, a teenager from Parwan Province, who was at Mr. Abdullah’s inauguration. “I don’t care about any of them because they don’t care about the country — just look at where the price of potatoes has come to.”

One of the most telling episodes of the crisis was underway in Dar-e-Suf District, in the northern province of Samangan, where the district governor was abducted by the Taliban a couple of weeks ago. As part of their campaign of appointing officials to show their parallel government, Mr. Abdullah’s team stepped right in to fill the vacancy even before the fate of the abducted governor was clear, pushing aside the caretaker appointed by the central government.

About 50 armed men accompanied Mr. Abdullah’s appointee to the district headquarters on Saturday under falling snow, tying his waist with a shawl and declaring him the new chief.