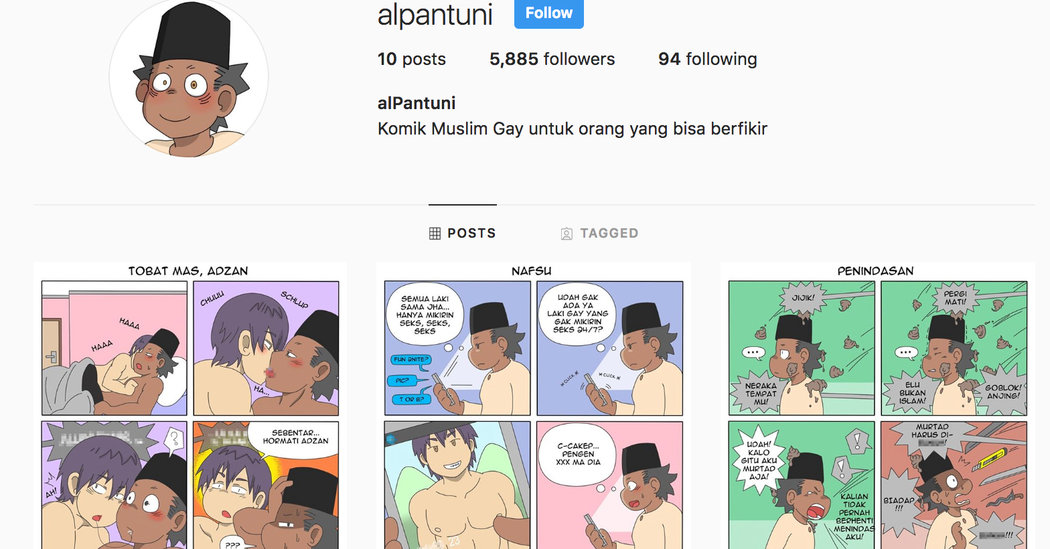 HONG KONG — An Instagram account featuring a comic strip with gay Muslim characters disappeared on Wednesday, days after Indonesian officials threatened to block the entire social media platform in the country because of an uproar over the comic’s content.

The episode is the latest flash point in a slow-burning battle over morality and civil rights in Indonesia, a Muslim-majority nation. Even as gay, lesbian, bisexual and transgender people in the country assert themselves, others support an ascendant Islamic movement that has embraced some homophobic policies and portrayed L.G.B.T. people as a threat to national harmony.

The Instagram account, @Alpantuni, first appeared in January with the tagline “Gay Muslim comics for people who are able to think.” Its Indonesian-language comics addressed gay identity and religious bigotry, and depicted men with their shirts off and in bed together, though never fully nude.

The account prompted a flurry of criticism on social media in the country, with some accusing the artist of pornography or blasphemy.

“God created humans as man and woman, a couple, and there is no third sex,” Muhyiddin Junaidi, a representative of the Council of Ulemas, a quasi-governmental body of Muslim scholars, said in a telephone interview.

“For us, being L.G.B.T. is a psychological illness that needs to be cured, and this comic is promoting it,” he added. “That will ruin the people’s faith in the long term.”

Indonesia’s Information Ministry sent Instagram a letter on Feb. 2 asking the company to remove the account, arguing that it violated an Indonesian law on distributing pornography, said Ferdinandus Setu, a ministry spokesman. He said the ministry had also threatened to shut Instagram down in Indonesia if it did not comply with the request.

Mr. Setu said that the post was removed early on Wednesday and that Instagram had taken down an account with a nearly identical name a few weeks earlier, at the ministry’s request.

But Instagram said on Wednesday that it had decided not remove the @Alpantuni account, which had nearly 6,000 followers, after determining that it had not violated the company’s “community guidelines.”

“There are a number of other reasons why an account may no longer be accessible, including, for example, if the account holder deleted the account, deactivated the account or changed the account user name,” said Ching Yee Wong, the company’s head of Asia-Pacific communications.

Instagram did not respond to a question about whether it had previously taken down accounts with similar names, and the owner of the @Alpantuni account could not be reached for comment.

Among other suggestions, Instagram’s community guidelines instruct users to refrain from posting nudity and to “always follow the law.” The company said on Wednesday that people should report Instagram content that violates the guidelines or “makes them feel uncomfortable.”

News of the ministry’s letter to Instagram was first reported in English on Tuesday by Coconuts Jakarta, a branch of a news outlet that covers parts of Southeast Asia.

Indonesia, the world’s largest Muslim-majority country, has an ethnically diverse population of 260 million people, about 90 percent of them Muslim.

A longstanding — if grudging — tolerance for homosexuality in the country began to erode in 2016, when the authorities, under pressure from right-wing Islamic groups, began arresting gay men in record numbers.

In 2017, two men accused of having sex with each other in Aceh, a semiautonomous Indonesian province that has imposed a strict version of Shariah law, were sentenced to 85 lashes in public.

And last year, a town in West Sumatra Province passed a law criminalizing what it called “immoral acts” between same sex-couples and prohibited residents from cross-dressing.

The recent spike in such legislation may reflect a growing recognition by some Indonesian politicians that they can win popular support by appealing to hard-line Islamic sentiment. The country is preparing for a presidential election in April, and some fear a return of the sectarian intolerance that marred the last such vote in 2014.

As of Wednesday afternoon, the @Alpantuni site was dormant, but other Instagram users were reposting its comics.

Some characters in the comics are criticized by others as “stupid,” “uncivilized” and “godless” for being gay. The Coconuts report said that the comments on the strip’s Instagram account were “overwhelmingly hateful (and a pretty accurate reflection of the L.G.B.T. haters depicted in the comic itself).”

One critic wrote, “If you want to be a Muslim, don’t be gay.”

“It’s your right to be godless, but do not be both Muslim and gay,” wrote another. “That is just greedy.”