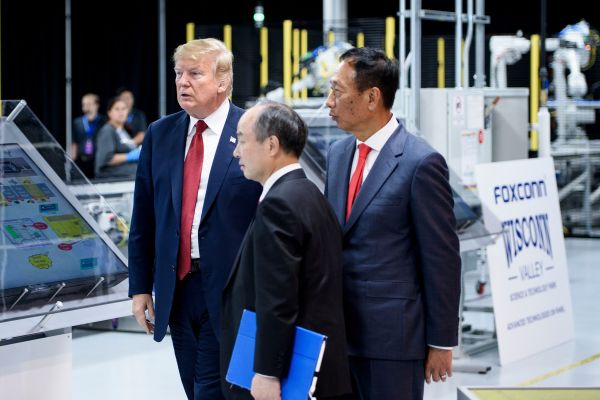 It seems Foxconn’s plans for a $10 billion Wisconsin plant are back on. After a couple of years of back and forths, the manufacturing giant says it’s recommitting to plans for a plant in the upper Midwest. A statement today cited a phone call between chairman/founder Terry Gou and Donald Trump.

“After productive discussions between the White House and the company, and after a personal conversation between President Donald J. Trump and Chairman Terry Gou, Foxconn is moving forward with our planned construction of a Gen 6 fab facility, which will be at the heart of the Wisconsin Valley Science and Technology Park,” the statement reads. “This campus will serve both as an advanced manufacturing facility as well as a hub of high technology innovation for the region.”

Earlier this week, the company noted that it was reconsidering its plans for the TV plant, noting that it was more interested in hiring researchers and engineers than the manufacturing jobs that were initially noted. “In terms of TV, we have no place in the U.S.,” Gou said at the time. “We can’t compete.”

An influx of manufacturing jobs would be a win for Trump at a vital time, as support has eroded over the country’s longest government shutdown and tariffs have made for icy relations with China. As CNBC notes, state government has sweetened the deal considerably with $4 billion in tax breaks.

Initial plans for the 20 million-square-foot campus, unveiled at a White House event in 2017, noted that it would bring 13,000 jobs — a nice bump as the U.S. has struggled to maintain manufacturing facilities.

Details, however, are still pretty thin.

“Our decision is also based on a recent comprehensive and systematic evaluation to help determine the best fit for our Wisconsin project among TFT technologies,” the statement continues. “We have undertaken the evaluation while simultaneously seeking to broaden our investment across Wisconsin far beyond our original plans to ensure the company, our workforce, the local community, and the state of Wisconsin will be positioned for long-term success.”