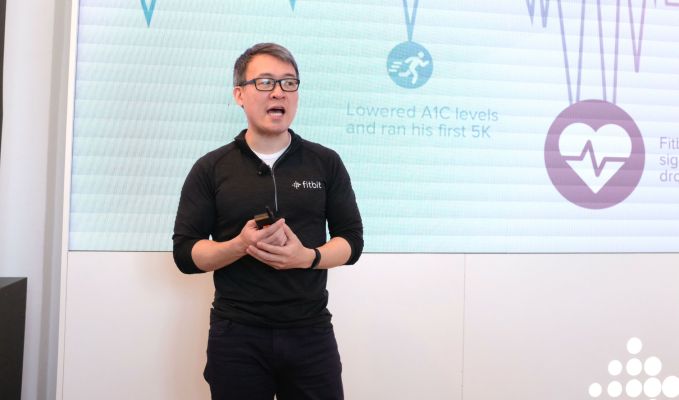 Two years ago, Fitbit was in a rough spot. The company had ridden the wearables boom to an IPO and become virtually synonymous with the fitness tracker space, only to watch its fortunes dwindle as the market shifted almost entirely toward smartwatches.

“That shift happened very rapidly over a year and a half,” CEO James Park said in an interview with TechCrunch. We always had a smartwatch in development — I would have loved to have launched it at least six months earlier. I think that would have helped our numbers dramatically.”

The company threw a Hail Mary. It acquired a trio of prominent startups within a year of each other. It was tens of millions of dollars explicitly invested to accelerate its long simmering smartwatch development.

“Our internal team was totally capable of developing these products,” Park says. “It was the matter of time to market. Buying Pebble, Vector and Coin allowed us to really decrease the amount of time it took to launch Ionic. We developed our plans to launch a smartwatch much, much earlier. It was going to launch at some point, but the acquisitions really accelerated it.”

The acquisitions were viewed by many as a bit of flailing from a company that had lost its way. Sure the smartwatch category was growing, but those numbers were driven almost exclusively by one company and one product. Bigger names like Google and Samsung had attempted to elbow in on that market share without making a dent in Apple’s bottom line.

All told, the first product to emerge out of those deals landed with a bit of a dull thud. The Fitbit Ionic was big, bulky, virtually app-free and not particularly cheap at $299. This time last year, however, the company dropped another device. The Versa was compact and priced to move at $200. Fitbit, meanwhile, had been hard at work putting all of that Pebble money to work developing a more robust app ecosystem.

By June, the company announced that it had shipped more than one million Versas. This past quarter, meanwhile, the company began to see some dramatic returns. “I think the business is turning around,” Park says, with a hint of cautious optimism. “Q4 was the first time in two years that we’ve seen year-over-year growth in devices shipped. So, after two years of working pretty hard to stabilize our financials and our company, I think we’re starting to see a good rebound in the business.”

It was a modest rise, but a rise none the less, with total shipments for the quarter increasing three percent year-over-year to 5.6 million. Average selling prices on the devices had dropped, but the company had managed to return to profitability, thanks in part to various cost-cutting measures.

Smartwatches are only one part of the company’s planned growth. The other major piece, predictably, is healthcare. It’s a category Apple has been going after aggressively, while one-time competitor Jawbone has pivoted into the category entirely. As slow as growth can be on the consumer side, the healthcare industry is downright glacial.

“We see ourselves evenly split between being a consumer company and being a health company,” says Park. “Despite some of the challenges over the past couple of years, our healthcare business has continued to grow. Last year, it grew eight percent year-over-year. This year, we’re projecting double-digit growth to about $100 million in revenue.”

This morning, Fitbit announced several new devices. There’s the Versa Lite, which delivers a stripped-down version of the successful smartwatch at an even lower price point; the Ace 2, an update to the company’s kids tracker; and the Inspire, which finds Fitbit consolidating five devices into two as the Flex, Zip, One, Alta and Alta HR are sunset. It’s a low-cost product fairly targeted at Fitbit’s healthcare offerings. All show a company that has clearly learned the lessons of a rough couple of years, and for the first time in a while, Park and Fitbit have a reason to be optimistic — albeit cautiously so.