Fear Has Yet to Be Extinguished After Chemical Fire in France 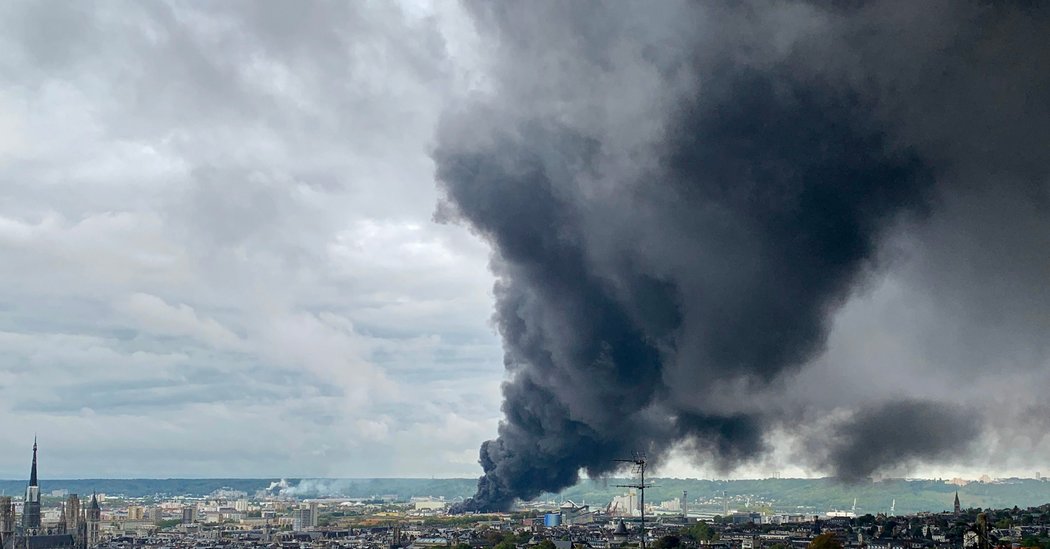 ROUEN, France — After the chemical factory fire, the few who ventured out clutched their noses or covered their faces in handkerchiefs. Soot fell in towns dozens of miles away, farmers dumped thousands of gallons of milk, harvesting was banned, schools closed and residents moved out.

More than a month after the giant Sept. 26 blaze, the flames have long been extinguished, but the fear is not. For France, the Lubrizol factory fire in Rouen, Normandy’s ancient river-port capital 80 miles from Paris, has become the disaster that won’t die.

In fact, it has come to epitomize environmental anguish in the age of fear for the planet. The disaster has tapped into a deep mistrust of the government — already chronic in France — anger at corporations and unease over the environment.

There have been parliamentary inquiry commissions and a criminal investigation. The American chief executive of Lubrizol — a major chemicals company owned by Warren Buffett’s Berkshire Hathaway — has been summoned to testify at the National Assembly in Paris.

President Emmanuel Macron himself has toured the streets of half-timbered houses to comfort citizens, and the inhabitants have continued to mobilize in front of Rouen’s ornate, 15th-century courts downtown.

In Paris, Eric Schnur, Lubrizol’s chief executive, tried to be reassuring, telling the French senate that there wasn’t much difference between the Lubrizol fire and “what you might find in a fire, for instance, in a house.”

More than nine tons of chemicals used for engine oil and industrial lubricant additives went up into the air that night, and the smoke plume stretched 13 miles. Many reported coughing, headaches, sore throats and runny noses.

Lubrizol has promised to help out farmers — some 3,000 were potentially affected — shops, and the local tourist industry. This past week, the government announced the first indemnity payments to farmers.

But the fears of the inhabitants here have not gone away.

How much is real, and how much imagined? Where is the line between paranoia and justified anxiety? The Rouen disaster has tested those limits.

The government has promised an epidemiological study in the spring. That is not soon enough for many still living in anxiety in Rouen.

“They close the windows. They’re afraid to breathe,” said Martine Fleury, a psychiatrist who took part in a recent demonstration.

The demonstration was against the government, against Lubrizol, against the local prefect, and against whatever else was deemed responsible. Hundreds of citizens turned out for it on a warm Saturday afternoon.

“There are people who are living completely barricaded,” said Dr. Fleury’s friend Nathalie Le Meur, a pharmacist and biologist.

An organizer’s voice boomed out angrily over a microphone, filling downtown Rouen: “They’re just telling us, ‘Move on, get over it!’ We want the numbers on the hospitalizations!”

Inscribed on a bus shelter were the words “Our past stinks of Lubrizol, our future smells like cancer.”

The crowd chanted, “Lubrizol, guilty; the state, complicit,” cars honked in solidarity and the citizens marched through the deserted streets, past the looming Gothic cathedral famously painted by Monet at different hours of the day.

“Now we have learned that we live on top of a volcano,” Dr. Fleury said.

“We could die, and we could die in an industrial accident,” she added.

And yet nobody has died, and many of the initial symptoms appear to have worn off. Few at the rally complained of having felt anything at all, or of feeling anything now. Some in Rouen are puzzled at the depth of the reaction.

“This is a subject that mobilizes a kind of tension,” said Guy Pessiot, a local historian who once ran Rouen’s tourism office. “There’s a kind of permanent anxiety. It’s the number one subject of conversation.”

He worried that the image of “rotten Rouen,” industrialized and smoke-filled — Gustave Flaubert, the town’s most famous native son, described “smokestacks of factories pushing out immense brown plumes” in “Madame Bovary” — would return.

Bottled water still packs local supermarkets because residents are fearful of drinking what comes from the tap, and slight coughs set off alarms long after ailments linked to the blaze are not present.

The local prefect, the government’s top representative, said soon after the fire that there was nothing to worry about.

“The air quality is normal,” Pierre-André Durand told journalists, a statement that stupefied inhabitants still overcome by the stink.

“For now, there are no health risks,” the health minister, Agnes Buzyn, said.

“They tried to minimize things. They said there is nothing wrong, but actually in the long term, we don’t know what the consequences could be,” said Justine Barthelemy, a school employee.

“I’m always suspicious of the government,” she said. “We know who is in power. The way it has been handled doesn’t surprise me.”

President Macron did not get a friendly reception here when he came more than a month later.

“Mr. Macron, we were very afraid in Rouen, my son was very afraid!” an anguished man called out to the president on his Oct. 29 walking tour through the darkened streets of old half-timbered houses.

“They told us not to even go to the hospital. There was no follow-up,” a woman said to the president as he passed amid boos and whistles.

“I’m very disappointed in you. You abandoned us,” another woman shouted. “I won’t vote for you again!”

But even if the government follows through on its promise of a long-term health study, puts in place a new warning system and holds off reauthorizing the plant — it is still closed as cleanup continues — it was clear at the recent Saturday demonstration that all of that will not be enough.

A fear has taken hold, made all the more pressing by the absence, for now, of tangible aftereffects and the conviction that the government has not told the “full truth,” a phrase repeated by a number of the demonstrators.

“I’m afraid that what we breathed will give us cancer,” said Astride Marchais. “I don’t drink the tap water anymore. I saw what was passing overhead, and it frightened me.”

Ms. Marchais, a human resources worker in local government, added, “I threw everything out, and I didn’t pick my fruit.”

“You had the feeling of not being able to breathe,” said Eric Galmot, who described himself as an urbanist. “And now, we have the impression that the truth is being hidden.”

“I might move somewhere else,” said Françoise Perchepied, a retired housekeeper. “Everything is polluted,. We just don’t want to be poisoned.”

She complained that the pills her doctor gave her had not done her much good and that she had a sore throat.

But it was the uncertainty that seemed to afflict people the most.

“We still don’t know the truth of what happened, and we still don’t know which products we can buy,” said Nicole Dimonnot, a musician. “How dare they tell us there were no problems, when we all saw that black plume of smoke?”