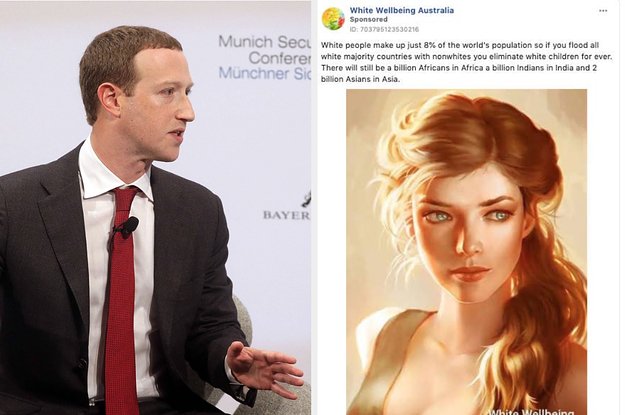 On Tuesday, ahead of a meeting with social justice organizations and the release of a civil rights audit that took two years to complete, Facebook Chief Operating Officer Sheryl Sandberg wrote on her personal page that the company “stands firmly against hate.”

But as Sandberg hit publish, the social network was running an ad from a white nationalist Facebook page.

Since July 4, the company has been running an ad from “White Wellbeing Australia,” a two-month-old Facebook page with 386 followers that has posted about a supposed “#whitegenocide” and fearmongered about the erasure of white children.

“White people make up just 8% of the world’s population so if you flood all white majority countries with nonwhites you eliminate white children for ever,” White Wellbeing Australia’s Facebook ad read, accompanied by a cartoon drawing of a white woman. “There will still be a billion Africans in Africa a billion Indians in India and 2 billion Asians in Asia.”

The ad comes at a particularly fraught time for Facebook, in which it has faced an external ad boycott from major corporations as well as internal employee pressure for its handling of hateful and racist content. Its executives have promised that the company is doing more to clarify and enforce its policies — particularly following a decision to leave up a post from President Donald Trump suggesting violence against protesters.

But critics are getting tired of the assurances.

Yesterday, following a meeting with Facebook CEO Mark Zuckerberg, Sandberg, and other company leaders, the organizers of the ad boycott said that all they heard were the “same old talking points.”

“I’m deeply disappointed that Facebook still refuses to hold itself accountable to its users, its advertisers and society at large,” said Jessica J. González, co-CEO of Free Press, one of the groups behind the #StopProfitForHate boycott. “I was hoping to see deep humility and reflection about the outsized role that Facebook plays in shaping beliefs, opinions and behavior, and the many harms it’s caused and facilitated in real life. Instead we saw more dialogue and no action.”

Have a tip about Facebook or another technology company? We’d love to hear from you. Reach out at ryan.mac@buzzfeed.com or via one of our tip line channels.

Zuckerberg, who has majority shareholder control of the company, has resisted calls for accountability, a stance that came into sharp relief on Wednesday, with the release of Facebook’s long-awaited civil rights audit.

Published on Wednesday, the two-year study found the company’s decisions “represent significant setbacks for civil rights,” including leaving up one post from President Trump alleging “illegal” absentee ballot voting and another that stated “once the looting starts, the shooting starts.”

“Even if not always enforced, the company’s policy changes demonstrated to the public, its own employees, and regulators that the only thing missing from Facebook leadership’s efforts is their own political will and courage,” Rashad Robinson, the president of civil rights group Color of Change, said in a statement. “Ridding the platform of hate and misinformation against Black people only became a priority when there was a PR crisis to endure.”

Robinson criticized the company for not adding a C-suite executive to handle civil rights, although Facebook did create a role for senior vice president of civil rights that will report through the company’s legal department and to Sandberg. The company also made it clear that it felt it was under no legal obligation to follow the audit’s suggestions.

In June, BuzzFeed News found that the company had been running paid content from the Boogaloo movement, a group of anti-government extremists calling for violence against police and state officials. The white nationalist ad found by BuzzFeed News on Wednesday makes it clear that Facebook still hasn’t rid its platform of hateful content, and is still profiting off it.

According to its Facebook page, the ad’s creator, White Wellbeing Australia, claims to be a “wellbeing community” seeking “to share information and allow like minded people to create contacts online and in the community.” Because the ad is not classified as a political cause, Facebook’s ad library does not show how much was spent on the paid content, or who it targeted. The ad began running on July 4.

Created on April 25 and managed out of Australia, the page has posted racist memes and content suggesting whites should “protect your people.” In a May 23 post, the page wrote, “Antiwhites use the myth of ‘complexity’ to justify harming and replacing white children in all white majority countries.”

“You don’t have to be a genius to understand that Demographics is Destiny,” the post read, accompanied by an image that stated “#WhiteGenocide.”

An administrator for the page did not return a request for comment from BuzzFeed News.